What happened in Nagaland, what happens next: Explained in 8 points

Tensions are soaring high in Nagaland. A botched operation by the Indian Army, which resulted in the death of 14 civilians and 1 solider, has cast a shadow on the present and the future of the region.

A group of 8 men were travelling in an open Jeep in Mon district of Nagaland, on the evening of December 4. An oncoming vehicle belonging to the military suddenly opened fire on the occupants of the Jeep.

What followed next was a bloody tragedy. 14 Nagaland civilians and one soldier were killed in the botched operation and its aftermath. Vehicles of the Indian Army set on fire by angry mob. Photo: PTI

It wouldn’t be an exaggeration to say that there’s a lot of bad blood flowing between the residents of Nagaland and the Indian Army. The incident has cast a shadow on the future of peace talks that are currently underway between Naga militant factions and the Centre.

Here are 8 developments you need to know:

The Nagaland state government will write to the Centre asking for the repeal of the Armed Forces Special Powers Act (AFSPA) from the state. The decision was taken at an urgent Cabinet meeting called early morning Tuesday.

Nagaland Chief Minister Neiphiu Rio on Monday had called for the repeal saying that it has created a law and order situation in the state.

Nagaland and the Naga people have always opposed #AFSPA. It should be repealed.

Why do the state government’s remarks matter? Neiphiu Rio’s party is an ally of the BJP, the ruling party at the Centre and part of the NDA. Moreover, even Meghalaya Chief Minister Conrad Sangma, another ally of the BJP, supported the call for repeal of AFSPA.

Armed Forces Special Powers Act (AFSPA) is often referred to as a draconian colonial-era law. In the Northeast, it is in place in ‘disturbed’ parts of Assam, Nagaland, Manipur (except Imphal), Arunachal Pradesh and Meghalaya. It gives the Army sweeping powers to arrest, shoot or kill anyone on the basis of suspicion. They don’t require a warrant to do so. And Army personnel involved are seldom charged with any crime in such cases.

Now, the Nagas also fear that the Centre will cite this law to give a clean chit to the Army personnel involved.

AFSPA was retained by Independent India as a measure against insurgent activities in the Northeastern states. The Act requires to be renewed every 6 months. However, the law has remained in several Northeastern states including in Nagaland for nearly 63 years.

The Nagaland state government has called off the ongoing Hornbill Festival following the civilian killings. It is a massive tourist extravaganza which began December 1 and was scheduled to end on December 10.

Nagaland cabinet decides to call off Hornbill Festival over killing of 14 civilians, state to write to Centre demanding repeal of AFSPA

Union Home Minister Amit Shah responded to the civilian killings during the ongoing Winter Session of the Parliament. He told Lok Sabha that the government regrets the incident and announced a high-level SIT probe in the matter.

During the ambush in Nagaland on 4-Dec-21 evening, a vehicle reached near the ambush. A battalion tried to stop the vehicle, but it didn't stop.On suspicion of the vehicle having insurgents, the vehicle was attacked. 6 of the 8 people in the vehicle were killed.- HM @AmitShah pic.twitter.com/FRteEy63TP

What he didn’t clarify was on what level the operation was planned and whether the Centre was planning to give permission to prosecute the Army personnel involved.

Opposition MPs in Lok Sabha protested over the matter and even staged a walkout during Shah’s response.

To refresh our memory, the Manipur unit of the BJP in 2014 had promised to repeal the controversial AFSPA law. Ahead of the 2019 General Elections, Congress also promised in its manifesto that it would review AFSPA and sedition laws in the country, after not doing so for nearly 60 years. 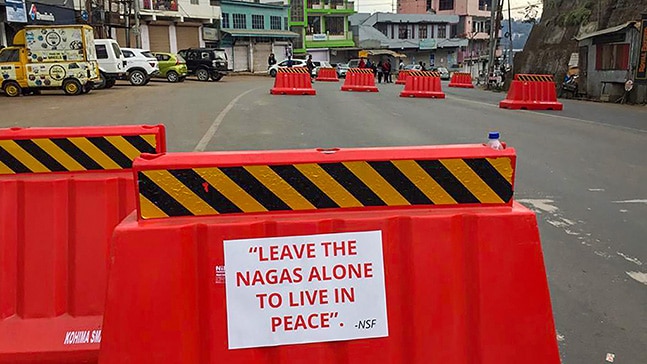 Protests erupt in Nagaland after the civilian killings. Photo: PTI

Most of those killed in the botched military operation belonged to the Konyak tribe. The Konyaks are among the largest tribes in Nagaland and are largely concentrated in the Mon district. It is also the only district where the insurgent group National Socialist Council of Nagaland NSCN (IM) has not been able to set up base camps, largely due to the Konyaks' resistance.

The Konyak tribe has been crucial in negotiating peace talks with New Delhi and the insurgent groups.

Now, the Konyak Union has made a five-point demand in response to Amit Shah’s statement. The demands include an immediate SIT probe in the matter, prosecution of the involved Army personnel, and also the repeal of AFSPA.

Konyak Union, the tribal body, also demanded to conduct an independent inquiry under a competent investigating agency and vacate the Assam Rifles from Mon district.(@hemantakrnath) #Assamhttps://t.co/MXg6gDGeY9

The Centre risks losing the support of the tribe as they carefully navigate through the peace talks.

6. HOW WILL PEACE TALKS BE AFFECTED? There’s a fear that the incident will only embolden the narrative of India versus the Naga people, that it will give fodder to the insurgent group NSCN (IM) and pro-India groups such as the NNPG will also be forced to voice their concerns against New Delhi.

The Centre had managed to bring a significant number of formerly insurgent groups to the negotiation table. Now, the incident serves as a reminder of the 50s or the 60s' brutal operations in the state, and the Centre risks losing its progress.

7. WHAT HAPPENED ON THE FATEFUL EVENING?

The Indian Army’s 21 Para regiment was responding to an intel on an insurgent group. The plan was to ambush the group. However, the operation is now being termed as that of ‘mistaken identity’ that killed 14 civilians.

After the special regiment killed 6 men in the Jeep, a clash between local villagers erupted. The villagers had gathered at the scene after hearing the gunshots. 7 more civilians and 1 soldier were killed in the scuffle.

The regiment is not often based in Nagaland and reports say they were brought in from Assam for the special op. The 21 paras are also an elite special forces unit, signifying that the operation was cleared at a high-level.

8. WHAT THE FIR SAYS

A suo motu case filed by the Nagaland police has registered the personnel of the 21 Para Regiment as 'murderers'. The FIR also mentions that the unit came with an ‘intention to murder and injure civilians’.

The FIR adds that the police was not given prior intimation on the operation.

Will this incident finally open the window for AFSPA to end? Or will it end up compromising the peace talks?

#Indianarmy, #21pararegiment, #AFSPA, #Nagaland
The views and opinions expressed in this article are those of the authors and do not necessarily reflect the official policy or position of DailyO.in or the India Today Group. The writers are solely responsible for any claims arising out of the contents of this article.