Unusual heat this summer has resulted in higher fruit-dropping.

Nagpur's oranges, which were the pride of the country, are fast losing sheen. Nagpur still retains the appellation of “Orange City” but the scene today is nowhere near the mystical description that famous Englishman Major Henry Bevan gave following his visit to Nagpur in 1818.

"The greatest ornament of the garden is... (an) orange tree called Cintra (santra) or Coolang. Its fruit is juicy and of exquisite flavour. There is a floating notion that it was introduced by the Portuguese. Some, however, believe that the great superiority of the orange is owing to a system of grafting and budding in which local gardeners of Nagpore are pre-eminently skilful."

The ongoing heat wave has affected the crop very badly, which is expected to bear fruit in October. The unusual heat has resulted in higher fruit dropping. Though fruit dropping is a natural phenomenon, the drop is minimum if the fruits have crossed berry-like size.

On account of extreme weather conditions, the extent of fruit drop is much higher and they dropped at just peanut-size stage. This is expected to result in 40-50 per cent loss of yield. It is the hottest season in the past 13 years.

"The water table has also gone down steeply. Generally, this range of temperature is seen in May-end. Even now the temperature is over 45 degrees Celsius. I have not seen such a low water table in the last 25 years. It is high time the government develops an orange policy and implements it too," said Manoj Jawanjal, director of Maha Orange, an orange growers' association.

The associations of orange growers wants an "orange estate" on the lines of one in Hoshiarpur in Punjab, where the government facilitates everything from cultivation to marketing and processing, etc. Such a policy will also help the state to develop uniform norms for farmers to claim compensation in case of crop damage.

The signature Nagpur Santra has an interesting history. It was fertilised more than a century and a half ago by grafting a wild orange variety from Assam with sakhar limbu (sweet lemon, Citrus Lamiata), a local sweet citrus variety.

Brought here by the Bhonsalas - the erstwhile rulers of the region - oranges made Nagpur famous. It is a variety that is exclusively grown in Nagpur and has a pockmarked exterior. The oranges are famous for their sweet and juicy pulp and were given the Geographical Indication (GI) tag in 2014.

GI tag 385 identifies the Nagpur orange as being one which has "a specific geographical origin and possesses qualities or a reputation that is due to that origin". The GIs are part of the WTO agreement on Trade-Related Aspects of Intellectual Property Rights (TRIPS) to which India is also a signatory. With a GI tag, the Nagpur orange joined other notable national and international products such as Darjeeling tea, Nasik grapes, Welsh lamb, Scotch beef, champagne and Roquefort cheese.

The Nagpur mandarin, although considered a good variety, was not considered viable for the food processing industry due to bitterness caused by the seeds. The current season also marks the arrival of the seedless variety of the oranges. 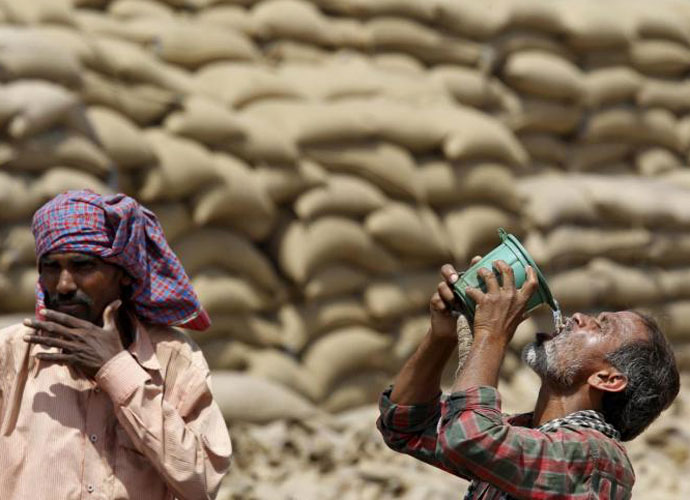 The orange farmer is not spared the vagaries of nature and uncertain markets. Photo: Reuters

Named NRCC Nagpur mandarin seedless-4, it was developed by selecting a plant from the orange (Nagpur mandarin) crop that had, by genetic mutation, seedless fruits. While a normal orange has an average of 12.68 seeds, the new variety has only 2.57 seeds per fruit. The seedless variety has bigger fruit, high yield (679 fruits per plant). The ordinary mandarin variety with seeds yields 520 fruits per year per plant.

Of the country's total area under orange cultivation at around 2 lakh hectare, Maharashtra has about 1.21 lakh hectares and the state's total production averages 10 lakh tonnes annually, through two seasons - Ambia and Mruga.

The orange is mostly cultivated in Amravati, Nagpur, Akola, Wardha and Yavatmal districts; Amravati district alone has 56,747 ha area under orange cultivation and accounts for 45 per cent of the mandarin area of the state.

Other places where the fruit is grown are the North East, Punjab, Himachal Pradesh and Rajasthan. However, oranges from Nagpur are considered top notch and the best in the country.

The economic condition of orange growers in this region is not encouraging. But they are certainly better off than the cotton grower who is often pushed to suicide. But the orange farmer is also not spared the vagaries of nature and uncertain markets.

The orange crop grows twice a year. The fruit available from September to December is ambiya which has a slightly sour taste. It is followed by the sweeter mrig crop from January to March.

Orange traders are mow becoming savvy and using professional marketing practices. They want to hook consumers from the first orange they buy. Growers had noticed that, after an uptick in sales at the start of each season, when shoppers embraced the fresh harvest, orders would drop off.

After extensive research on consumers' taste preferences and fruit-buying habits, orange growers found that those first oranges sold each year were often bland, because they had spent less time ripening on the tree. Dissatisfied consumers often waited weeks before trying another orange, while those that tried a sweet piece of fruit kept coming back for more.

The commercialisation of the orange crop has been impeded by several factors. One of it is the absence of freezing and processing centres. The first organised attempt was made in the 1960s when farmers came together to form the Nagpur Orange Growers' Association (NOGA). NOGA ran into losses and the government took control of it in 1972, bringing it under the Maharashtra Agro-Based Industries Development Corporation (MAIDC). But the move had a short lived glory.

Maha Orange has successfully revived two defunct orange processing plants of the state government at Morshi and Karanja (Ghadge) which were closed for 20 and 8 years, respectively. With the revival of these two units, not only has the cooperative proved that these units are economically viable but it has also fetched more price (almost double) to the farmers' produce when compared to what they get at the conventional Kalmana market in Nagpur.

"Since the government showed faith in Maha Orange and leased the plants to it, it was our first priority to prove that the plants can be run viably. After taking over the Morshi plant in January this year, in the last two months we have exported 500 tonnes to Bangladesh and 400 tonnes in the domestic market in the country which, for starters, is a good achievement," said Shridhar Thakre, executive director of Maha Orange.

The government needs to put in place a comprehensive orange policy for reviving both orange orchards and the trade.

Also read: Heat is not just a feeling. It strips us naked

#Heatwave, #Nagpur Oranges
The views and opinions expressed in this article are those of the authors and do not necessarily reflect the official policy or position of DailyO.in or the India Today Group. The writers are solely responsible for any claims arising out of the contents of this article.