Those interrupting the prayers claim they wanted to prevent ‘encroachment of land’.

A group of Muslim men gathers for Friday prayers knowing fully well they might be interrupted. There have been threats and a few “incidents” in the area. The community has already been driven out of one ground where they would pray. Soon enough, the namaz is disrupted. A gang descends on the area, shouting slogans and making threats. The people disperse, their prayers left incomplete.

This took place recently in the National Capital Region, despite the administration being warned well in advance. Two days after the incident, on May 6, chief minister Manohar Lal Khattar spoke about the issue, and said law and order would be maintained, but added a caveat: “There has been an increase in offering namaz in open. Namaz should be read in mosques or idgahs rather than public spaces.”

The message was clear: The victims are guilty and at fault too. The government can offer them the protection, only once they retreat to their alloted “spaces”.

Those who interrupted the namaz justify their act by saying they wanted to prevent “unauthorised gatherings” and “encroachment of land”. But this does not explain why they took the job upon themselves as a mob, instead of lodging a complaint with the administration. Also, why chant “Jai Shri Ram” and “Radhe Radhe” over what was ostensibly a civic duty mission not linked to religion?

In neighbouring Delhi, a tomb suddenly transformed into a temple. A 15th century monument – a protected structure, no less – was painted white and saffron and had idols placed in it. The Delhi government has ordered an inquiry and promised action into the matter.

The two cases of “encroachment” ring alarm bells. Are public spaces by default the property for majoritarianism to seize at whim, while the state plays a complicit and mute spectator?

Friday prayers have been interrupted in Gurgaon for at least three weeks in a row now. The first police complaint over the issue was registered on April 26, after a video of an incident in Wazirabad village of April 20 went viral, where a group of men can be seen purportedly asking Muslims to pray in mosques and “go back to their country”. 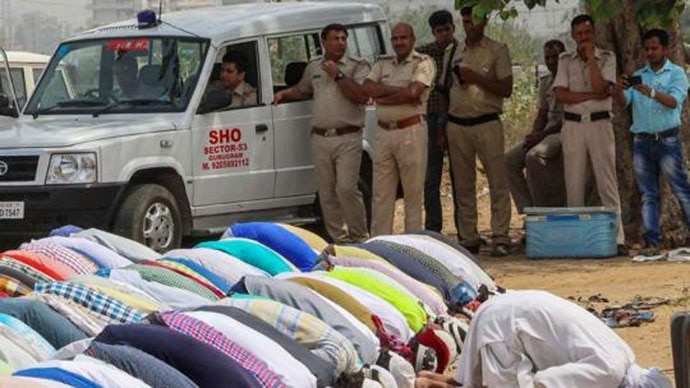 Friday prayers have been interrupted in Gurgaon for at least three weeks now. Photo: PTI

According to The Tribune, on April 27, Muslims from the area offered namaz at the Sector 53 ground while the police stood by. "Irked residents of Wazirabad and Kanhai villages insisted that if namaz was offered today (May 4), they would organise a havan” — as though it will result in a prayer-for-prayer war.

The administration seemingly even listened to them. The Haryana Urban Development Authority (HUDA) put up a board in Wazirabad village proclaiming the property belonged to it and banned trespassers. Prayer meetings on the property were promptly called-off.

However, that did not stop the anti-encroachment crusaders. On May 4, The Times of India reported, “Unprecedented scenes of people offering namaz getting up midway and running away in the face of slogan-shouting were witnessed in busy areas like Iffco Chowk, Udyog Vihar, Leisure Valley Park and Mall Mile on MG Road.”

On May 3, Muslim leaders had reportedly met police officers and agreed to not offer namaz at the “disputed sites” in Wazirabad, Sikanderpur and Atul Kataria Chowk. The police despite that could not ensure uninterrupted prayers in other areas.

Six men had been arrested for the April 20 incident. On April 30, a demonstration was held in their support by the Sanyukt Hindu Sangharsh Samiti; they demanded that the case against them be scrapped and offering namaz in the open be banned.

So far, Muslims were targeted on issues that had a direct link to the Hindu faith. Now new flashpoint is practising faith in open spaces.

Emotive tropes are used to justify these acts, such as painting Muslims as Pakistanis, Bangladeshis, Rohingya, who indulge in anti-India activities. Religious slogans are used to buy immunity for the aggressors. 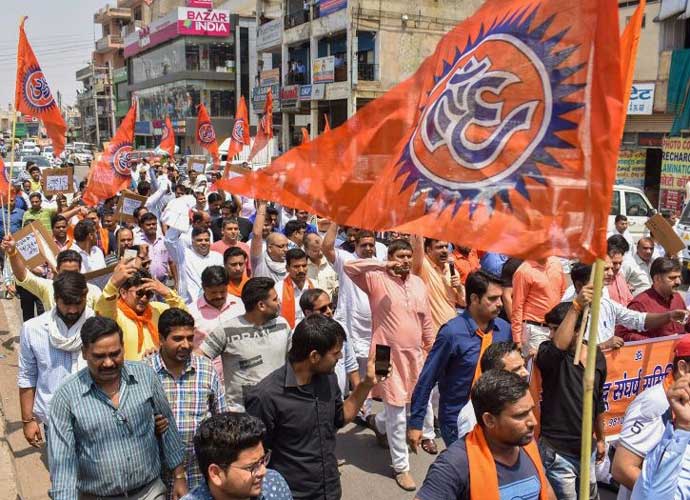 The Sanyukt Hindu Sangharsh Samiti has demanded that Muslims not be allowed to offer namaz in Hindu-dominated areas. Photo: PTI

In the aftermath of the Gurgaon incident, the Sanyukt Hindu Sangharsh Samiti wrote to the CM. The letter says: “For the last one-and-a-half months, a group of men have been reading namaz on the land of Wazirabad, Gurgaon, with the intention of occupying it illegally. The environment there is being ruined by chanting slogans of 'Pakistan zindabad' and 'Hindustan murdabad'. When some patriotic youth stopped them from doing this, police conducted a one-sided investigation. Does chanting ‘Vande Matram’ and ‘Jai Shri Ram’ fall within the ambit of offence that the youth were arrested?”

This Pakistan zindabad versus Vande Matram is a replay of the script seen in Kasganj in January and in Bihar in March.

The letter also says: “Rohingyas and Bangladeshis, residing in Gurgaon, should also be identified and marked. Permission should not be given to read namaz in Hindu colonies, sectors and neighbourhoods. Permission should only be given in those places where the strength of this population is more than 50 per cent, otherwise there will continue to be a possibility of peace being obstructed.”

This is patently illegal, and a thinly veiled threat. Article 25 of the Constitution of India says that all persons are “equally entitled to freedom of conscience and the right freely to profess, practise and propagate (their) religion”. No one group of citizens gets to decide where others can pray.

The Haryana government should have immediately denounced the writers of the letter and ensured uninterrupted prayers. Instead, Khattar’s statement is a diluted version of the same argument.

Haji Shehzad Khan, who first filed the police compliant regarding the April 20 incident, told the Hindustan Times, “There were seven lakh Muslims in Gurugram and only 22 mosques, so they are usually left with no option but to offer prayers in open spaces. 'We are not disturbing anyone.'”

However, if the government was indeed worried about the use of public land, it could have acted against the prayer groups before they fell under the saffron gaze. When the Muslim leaders met police officers in the aftermath of the April 20 incident, they could have figured out areas they could pray without letting fears of encroachment thrive.

Less than three years ago, 400 Muslims were driven out of their homes in NCR’s Ballabgarh after a clash over a mosque. Now, even the act of praying seems to have become a provocation for saffron bullies.