Why must women go through the burden of changing last name after marriage?

Tanvi whateverhernameis pulled one. Sure. The passport was issued, and the outrage rose to the top of the list for the day. Everything that could be protested was protested. Except for the one little nugget that everyone takes for granted and no one fights - the burden on women.

Forget Tanvi. Forget religion. Forget the passport incident. Focus on this next question I ask of all of you. Focus on the real issue that deserves attention:

Why do women have to bear the extra load of the mismatch between social norms and legal norms? Why is there an extra tax on us for being women? Why do others have authority over our names? If we do not like the imposition, and are privileged enough to have the choice to change it, why do we have to bear the cost of changing it?

One long summer vacation, we went to visit an aunt. Pushpa maasi, let us call her. After many years we went to visit her in her house, the one she shared with her in laws. She and her family welcomed us with affection, and it was all wonderful. But in the conversation, they kept using the name Puja.

It took me a few minutes to realise that my maasi seemed to have two identities. She was Pushpa to us, but she was Puja to them. She was a close relative, we met her on family occasions such as weddings and some festivals - and I had only heard her addressed as Pushpa, that’s what all of her original family called her, as they always had.

But it seems that for years she had been called Puja in her marital home. Some of her relatives dropped by for lunch with us, and again, all of them called her Puja. It puzzled me. Why would one person have two names?

Back home, I asked around – and was mocked for my naivety. “Don’t you know, you silly girl, that when you get married you get a new name?”, they asked. “Of course I do!”, huffed my ten year old self. “You get a new surname, but I’m not going to do that!”

The aunts and cousins, how they laughed. “But didi”, I persisted. “They called her by a different first name! She wasn’t Pushpa maasi there, she was some Puja. How is that possible?” Of course, I was told then, that it was common for the first name to be changed too. I was aghast.

One day I asked Pushpa maasi how she lost her name. She smiled her usual patient smile, and said, “It was done by their (nodding towards her husband) side’s pundit. They told him to write the new name, and so he wrote it. By that time our Panditji had gone home, and there was no one on our side around to ask me, or to tell them not to do this. Maybe they asked my parents, but they were in no position to refuse anything at that time”. “That’s awful, maasi”, I gasped. “It’s fine now. I am used to both names now. Those were different times, beta. Thankfully it doesn’t happen so much around us any more”, she finished.

Over the next few months I asked around at school, and in the neighbourhood. Apparently it was a normal custom. Everyone was used to it, and dealt with it quietly. I kept watch, and wondered how these women managed their multiple identities. After all, their school certificates had one name, and now their salary accounts had another name altogether. These were the more innocent days before the threats of PAN and AADHAR alignment had come to pass. (Yes, sure, necessary, but it comes at personal cost, double cost for women). 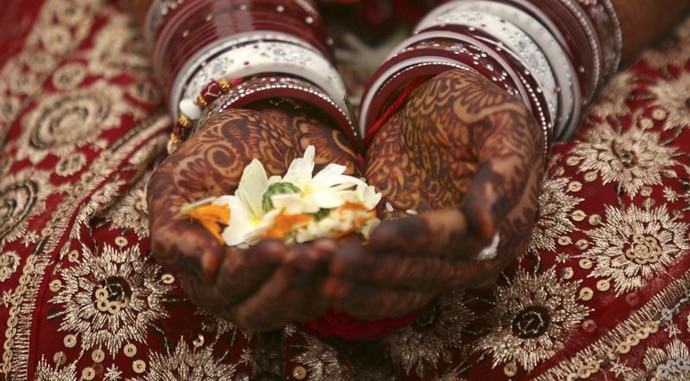 I wondered how the Pushpas of the world managed. After all, the birth certificate, the class 10th certificate - they were both proof of name and identity. And now she had this whole other name that some people had decided for her. Did it not totally mess up her life and sense of self?

It was meant to, I realised. By changing her name, all that was past for her was denied. She began life again with a new name, new persona - they called it a new family. I saw it as trampling the self. Pushpa maasi had accepted it all.

I asked around and over the years found a few others who had their name changed at marriage. And was told, “Arre, that doesn’t matter so much. They will write that name on the punditji’s paper, but that is not a big deal. Everyone ignores it”.

“But, did you not change your name after marriage?” This was a friend, who clearly had changed her surname but not her first name.

“Of course I did, but only half of it. Anyway, all I had to do was change my name in my bank account and with my employer. The rest I did not do, it was too much”

“Well, it could have been. After all the bank had no proof that I was the same person, and there was no document with the name I actually wanted and use now. But it was alright. The lady at the bank had the same thing happen to her and her daughter, so she understood. All the other people also knew that this is how it works”

My rule bound brain had exploded.

“Of course, I still have a few bank accounts in my maiden name”, she added. “I had some shares and all in that name. For the first one I tried to change my name but they messed it up so many times that now I don’t even receive the dividend. I have no idea who gets it. I got tired of trying. And learnt my lesson, and stopped trying. Either I could work and look after my job and family, or I could do all these things. So now, old investments are still linked to one name, new are to the new name. It’s okay, the bank people are helpful.”

“But don’t you want everything sorted with one name? For taxes and all?”, I persisted.

“Sigh, of course I do. But that means court, and newspaper advertisements and so much extra work and cost. Who will do all of that? I don’t have a minute to myself”

This was true. We had been close friends for years, lived in the same city and met barely once a year for a few minutes on the traditional Diwali rounds. Even our phone conversations were conducted while folding laundry or some routine housework. She was doing two jobs and more already, she could not afford to do more.

As we finished this conversation, I realised I had not been able to tell her the story of how I acquired two separate middle names, in addition to the inevitable two surnames. Traditions, you see, ruled. And each region had traditions of their own. They gave me the name that worked for them, not what I wanted or chose. They set the social norms, filled up the documents and forms, and I was left to clear up the mess.

There is a cost to every mess, and it was dumped on the woman’s lap to sort out. I did not ask for my name to be changed, it was your social design. I did not ask for it to be mismatched with your legal design. No woman asks to be burdened with the cost of the mismatch, but I was told, “aisa hee to hota hai”. (This is the way it always is). True, it is the way to not be bothered about the extra burdens we dump on women.

So here we are, women, holding another extra, unfair burden, not of our making or consent.

Also read: So what is the big takeaway from Trump-Kim summit?