The West Bengal Chief Minister has alleged central forces did not let people vote in Nandigram.

Interest rates on small savings got smaller last evening. Before many read that news in the morning newspapers, Finance Minister Nirmala Sitharaman tweeted that the change in interest rates has been changed. The cuts in schemes ranging from the National Savings Certificates to Public Provident Funds would have hurt millions of middle class depositors. You can hurt middle class depositors at all times, but not in the middle of elections. In the middle of elections, you cause rising fuel prices to fall. The FM wrote on Twitter, “Orders issued by oversight shall be withdrawn.” 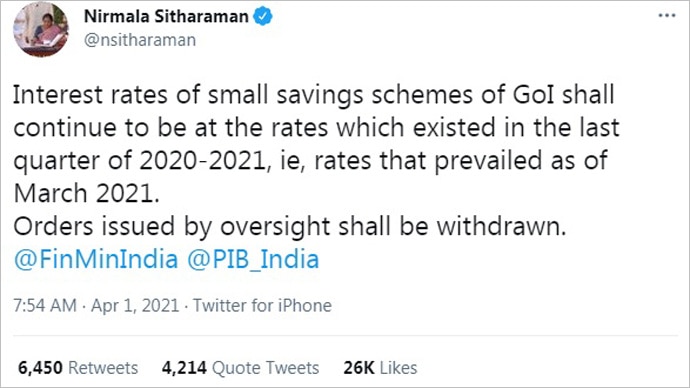 The rate cuts that went as high as 40-110 basis points was to come into effect from April 1 and remain in effect till June 30 – the first quarter of the financial year. Since no major state is going to polls in the second quarter, expect the oversight to return July 1-September 30.

What is an oversight? Our Word Of The Day. Apart from that oversight is ‘passing over without seeing’. So, Nirmala Sitharaman perhaps oversaw that her party colleagues are out and about asking for votes. Sitharaman oversees the Union Ministry of Finance. Overseeing requires she keep a watch over such oversights, but things happen.

What else has happened in the country today? Mamata Banerjee camped at a polling booth in Bengal. Seated on her wheelchair, Banerjee dialled Bengal Governor Jagdeep Dhankhar to complain against the central forces, who she alleged were not letting people come out to vote. Her key opponent in the Nandigram constituency, however, voted, as did Mamata herself. TMC charged the BJP with booth-capturing and that a TMC election agent was beaten up last night and made to flee. #WATCH: West Bengal CM Mamata Banerjee speaks to Governor Jagdeep Dhankhar over the phone at a polling booth in Nandigram. She says, "...They didn't allow the local people to cast their vote. From morning I am campaigning...Now I am appealing to you, please see..." pic.twitter.com/mjsNQx38BB

Parties have doubled up their campaign efforts in Bengal with a heady mix of sticks and stones. Some stones were hurled at Nandigram contestant Suvendu Adhikari’s convoy. A BJP worker was also found hanging at his home in a case of suspected suicide. Before the suicide, Uday Dubey was seen at Mithun Chakraborty’s rally in Nandigram on March 30. The BJP says Dubey was threatened last night for supporting the BJP candidate. This morning he was found dead. A BJP worker reportedly was also beaten up. In Keshpur, vehicles of journalists were vandalised and a woman journalist was beaten up. But, you see, a ‘little violence’ constitutes peaceful elections in Bengal.

In Assam, where too people voted today, there was no violence but a ‘threat’. The alleged threat has earned BJP leader Himanta Biswa Sarma, who was once upon a time a Congress leader, an Election Commission notice after a complaint was made by the Congress. The charge against Himanta Biswa Sarma is threatening Hagrama Mohilary with a jail term by misusing the NIA. Who is Mohilary? Opposition leader from the Bodoland People's Front. Why is the Congress concerned? Because BPF is a Congress ally.

In Tamil Nadu, the BJP went for a distant campaign. Not virtually distant though. You can call it indirect also – one by doing which you don’t ask for votes, but expect to get them anyway. The central government announced the 51st Dadasaheb Phalke Award would go to Rajinikanth. PM Modi congratulated Rajinikanth over the announcement made by the government and then Rajinikanth expressed how humbled and honoured he felt by it all. Rajinikanth is a great actor but we want to discuss the greatness of the man after whom the award has been named.

Dadasaheb gave India its first feature film Raja Harishchandra 108 years ago in 1913. We all know that Dadasaheb could not find a woman to play the part of Raja Harishchandra’s wife Taramati so he cast Anna Salunke, a male actor, who worked as a cook in a restaurant, as Taramati. But did you know that Dadasaheb also preceded the film with a dance performance by two European girls in the initial days of the film’s launch? Why? To grab eyeballs. 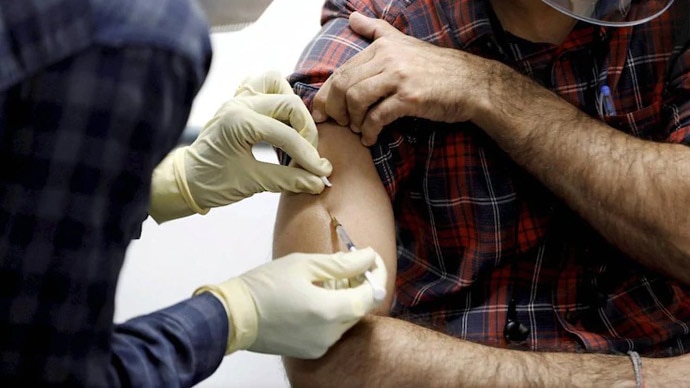 All days in April will be vaccination days. (Photo: Reuters)

France, meanwhile, has entered its third national lockdown - for three weeks this time. President Emmanuel Macron said, “We will lose control if we don’t act now.”

Why did Somy Ali act then? Because Salman Khan allegedly cheated on her. In an interview, Somy Ali has said that she broke up with Salman after a 6-year-long relationship because he “cheated on me and I broke up with him and left. It's as simple as that.”

No loss is simple to move on and away from. And since we are talking about loss, we suggest you read The Inheritance of Loss by Kiran Desai. The book won Desai the Man Booker Prize for 2006.

DMK leader A Raja has lost 48 hours of campaign time because the Election Commission has punished him with a campaign ban of two days. The punishment came after Raja made some remarks last week against Tamil Nadu Chief Minister E Palaniswamy, which the poll panel found "obscene" and against the "dignity of motherhood of women". What did Raja say? "...One can say Stalin is born in the proper way, nine months after a proper marriage and rituals. Whereas Edappadi is born like a premature baby and came all of a sudden." There may or may not be a proper way to take birth but to invite a ban on campaign amounts to an improper campaign strategy. Raja has 48 hours to get things right.

Donald Trump has apparently exhausted his quota of attempts to fix things with Facebook. The former US President made an appearance on the Facebook page of Lara Trump, Donald Trump’s daughter-in-law, only to be made to leave again. Also Read: Nandigram will prove why elections in India are a one-day match