DailyOh! PM Modi has a stadium named after him, to the name Mamata Banerjee gave him

The Motera Stadium stands in Motera but as Narendra Modi Stadium. Mecca though might have shifted from England to India. You didn’t hear the rumbling or feel the Earth shake because the Earth didn’t move. With a capacity of 1,32,000, Motera could well be to cricket what England’s Lords is – ‘Mecca of Cricket’. The Motera cricket stadium has four dressing rooms and each room has a gymnasium attached to it. PM Narendra Modi’s nameslip, however, has been pasted over the nameslip of India’s first Home Minister Sardar Patel on the cricket stadium. The announcement of the nameslip change was made by India’s incumbent Home Minister Amit Shah, who informed that the Narendra Modi Stadium will be part of the Sardar Patel Sports Enclave, whose foundation was laid today by President Ram Nath Kovind. The sports enclave and cricket stadium along with Naranpura Sport Complex will equip Ahmedabad to hold any sport played internationally in one city. In India, no matter how many sports are played, cricket walks away with all the attention.

Cricket resumed at the Narendra Modi Stadium with India playing England in the third Test of the four-match series, which was leveled 1:1 with India winning the last match and England beating India in the first. To begin with, India lost the toss and England chose to bat first.

In Gujarat, PM Modi got a stadium named after him but in West Bengal, Chief Minister Mamata Banerjee gave him a new name – ‘dangabaaz’ (rioter, in Bangla) and said that if the BJP is defeated in the West Bengal Assembly elections, it will also "disappear" from the rest of India. What is the link between the two? The link just disappeared. 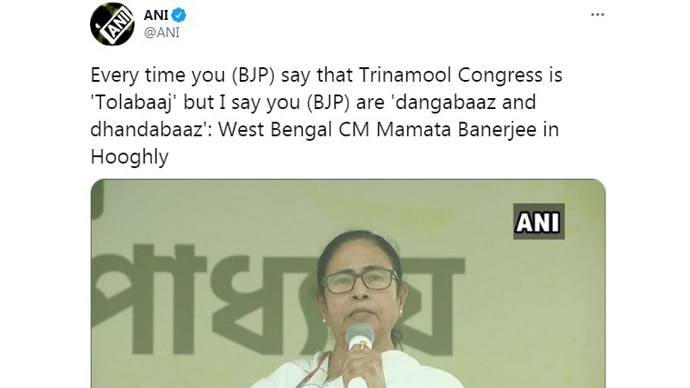 Ahead of elections, it was President’s Rule for Puducherry because the elected Congress coalition government lost the mandate to rule.

In neighbouring Tamil Nadu, it was time for birthday celebrations of a person who is no longer alive. J Jayalalithaa was born on February 24 in 1948. The day matters to her partymen and expelled partywoman, VK Sasikala, more so, because elections are round the corner. Sasikala used the day to ask Amma’s followers to unite against the ‘common enemy’ DMK in the upcoming assembly election.

Leave politics to politicians; let us talk about Amma’s days as an actor in Tamil cinema. Do you know why Jayalalithaa couldn’t watch the very first movie she acted in? Let us tell you the story from where the story begins.

Jayalalithaa’s father died when she was young, and her mother, a film actress, moved the family first to Bengaluru and then to Chennai. Financial circumstances forced Jayalalithaa to drop out of school and pursue acting as a full-time job. Jayalalithaa was just 16 then. Who likes a full-time job at any stage of life? Maybe some do. We are a big family of 7 billion-plus people, after all, and exceptions to rules can exist.

Jayalalithaa’s mother forced her to get into acting because there was this thing about making ends meet. So, Jayalalithaa worked in her first film Vennira Aadai in 1965. There was a scene in the movie in which Jayalalithaa wore a sleeveless blouse and was seen drenched under a waterfall. The movie was rated ‘adults only’. The movie was such a big hit that it went on in cinema halls for over 100 days but Jayalalithaa, who did the ‘adult scene’, couldn’t watch the ‘adult film’ because she was sweet 16. That amounted to irony’s most brutal murder. But then irony dies every other day and in every other corner. Kangana Ranaut will soon be seen chronicling the life of Jayalalithaa in Thalaivi. A movie on Kangana’s life too wouldn’t be a bad idea. She will probably play herself in her biopic, but we're not going to guess at this point. But till Thalaivi is ready for release and a movie on Kangana is thought about, you can watch web series Queen (2019), which has nothing to do with Jayalalithaa. Why should you watch it then? Watch it to find the answer.

The government today answered calls for allowing private players to get into the vaccination drive. Come March 1, people over 60 years of age and people above 45 years of age will be allowed to get vaccinated at 10,000 government facilities and private hospitals. If you go to government facilities, you will get the vaccine for free. If you go to private facilities, you will have to pay. Go only if you have co-morbidities and are above 45, or are just 60 or older. 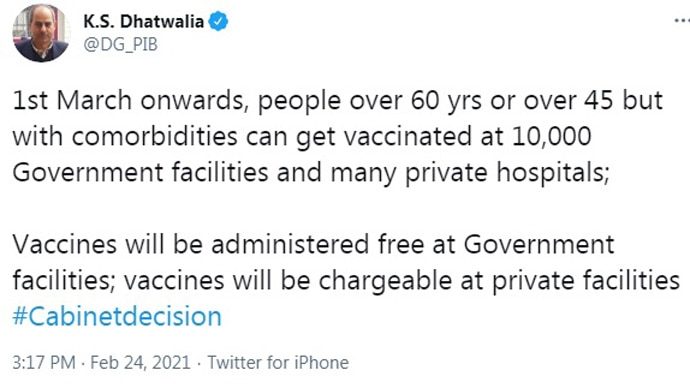 Punjabi singer Sardool Sikander, who gave his voice to Ek Charkha Gali De Vich, died at 60. Tributes are pouring in from a lot of people.

Arguments are flowing from all directions on the inauguration of the Narendra Modi Stadium. There are those who ask why a stadium should be named after a politician and not a sportsperson and those who say Modi is the brain behind Khelo India and Fit India. Should you care about those behind or give those in front their due? The house is divided no matter what your view on today’s inauguration is.

There are no divisions over the origin of the word inauguration. The Word Of The Day inauguration stems from Latin word augur, which meant to foretell especially from omens. For instance, the inauguration of the stadium augurs great news for sports in India. Inauguration is basically all about telling what the future holds. We inaugurate places, buildings, schemes etc to ensure their future and the future of all things related holds well. We have no choice but to live in today even if our mind paces between yesterday and tomorrow.

What made Priyanka Chopra’s day yesterday? Memes over a dress she wore recently. No matter what dress you wear, don’t forget to wear the mask because corona is still around. Would you be willing to go to office now that cases are falling? Harjas Sethi doesn't. Not for now at aleast. Who is Sethi? The woman whose 'rant' video about going to office has gone viral.

Now, that you have watched this video, we suggest you also watch the trailer of Alia Bhatt-starrer Gangubai Kathiawadi, which released today. The movie will release months later on July 30.

On that note, we will call it day. See you tomorrow.

Also Read: Have we knocked out Covid?

#Coronavirus vaccine, #Coronavirus, #Motera stadium, #Narendramodistadium
The views and opinions expressed in this article are those of the authors and do not necessarily reflect the official policy or position of DailyO.in or the India Today Group. The writers are solely responsible for any claims arising out of the contents of this article.