Standing for national anthem in cinema hall: Why Supreme Court wants government to take a stand

The old order has neither been struck down, nor recalled.

In a heartening development, a bench of the Supreme Court on Monday, October 23, revisited its November 30, 2016 order on mandatory playing of the national anthem in theatres before every film screening, and declared that citizens “don’t have to wear [their] patriotism on their sleeves”. Justice DY Chandrachud, who was also part of the nine-judge bench of the landmark Right to Privacy judgment, lashed out at highly criticised earlier order, delivered by none other than the now Chief Justice of India, Dipak Misra, and in effect the bench threw the ball in the government’s court.

However, despite the hullabaloo, the November 2016 order hasn’t been struck down, or recalled. In fact, it still stands, and CJI Misra was part of the three-judge bench that heard a petition filed by Kodungalloor Film Society in Kerala seeking a withdrawal of the earlier order. Movie theatres are still mandated to play the national anthem, and citizens, by the November 2016 order of the apex court, are still required to stand and abide by the court order as mark of patriotism.

But what’s important about the three-judge bench’s hearing of the petition is the observation made by Justice DY Chandrachud, who delinked – at least in theory – what amounts to “a feeling of committed patriotism and nationalism”, which Justice Misra had wanted instilled in citizens, and standing up for national anthem in a movie hall where people go for entertainment.

Chandrachud J. repeats the shorts-in-the-cinema example, and asks "where do we draw the line at such moral policing?"

He also added: “You don’t have to stand up at a cinema hall to be perceived as patriotic.” This is in stark contrast to the government’s support for November 2016 court order, as evidenced in the attorney general KK Venugopal’s submission that the national anthem would be a “unifying force” for Indians.

AG Venugopal said: “Its purpose is the loyalty of the population, to neutralise divisiveness, foster unity in diversity. It is the duty of every citizen under Article 51-A (a) to abide by the Constitution, respect its ideals and institutions, the National Flag and the National Anthem." This was countered by Justice Chandrachud by arguing that the scope of Article 51A was broad, and it also included in its list of fundamental duties that citizens “develop scientific temper, humanism, spirit of inquiry”.

Despite the in-built criticism of the mandatory nature of the earlier national anthem order, the SC bench stopped short of striking it down. In fact, it passed the buck to the government asking it to bring about a legislation and amend the Flag Code if it wanted citizens to stand up for national anthems in movie halls. Justice Chandrachud told AG Venugopal that the court cannot enforce the fundamental duties.

"Are we [Supreme Court] supposed to enforce all this? As the government, you have the power. You take the call. Why should we take your burden? If the court is supposed to enforce respect for the national anthem on citizens, it should also enforce the other fundamental duties in Article 51A? You know what is good for the goose is also good for the gander, right?" Justice Chandrachud asked AG Venugopal.

This is when Chief Justice Misra suggested a change in the language of the 2016 order, substituting “shall” with “may” – thereby making the playing of national anthem and standing up when it plays, optional. However, AG Venugopal said that the government would take a call, and the “shall” wasn’t changed to “may” in the order.

The Chief Justice dictates the order. He does not replace "shall" with "may".

Consequently, the effect is that the playing of the national anthem remains mandatory in cinema halls. In the meantime, the government is +

The next hearing in the case has been scheduled for January 9, 2018, effectively giving the government a little over two months to take a call. Effectively, SC hasn’t struck down its earlier order, even though it has been deemed undemocratic by many legal experts. By passing the buck to the government, the SC in a way reminded one of its 2013 order on Section 377, in which case too it said that the government must legislate. Four years later, no democratic and progressive legislation has come.

The enforced patriotism of the November 2016 order has been criticised much. As Justice Chandrachud points out, the conflation of entertainment with mandatory displays of patriotism defeats the purpose entirely. There’s much irony in standing up for national anthem in a somber manner and watching a slapstick comedy on the big screen afterwards. It amounts to the laughable and the ridiculous, as many have amply argued. 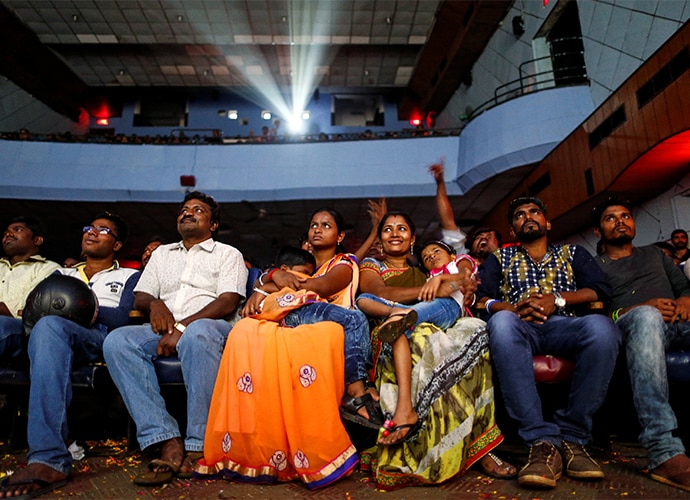 Constitutional patriotism, however, stems from an entire different set of ideals and ideas, which require citizens of India to develop healthy skepticism to power, to believe in and enrich democracy by broadening its scope, by making it more inclusive, by fighting for the rights of the marginalised, by making governments accountable.

Will the government keep this in mind in case it brings in a legislation regarding the national anthem, making it legally enforceable? Will it amend the Flag Code by January 9, 2018 and strengthen its nationalism narrative? These are the questions that remain unanswered at this point, leaving the citizens in a limbo. Do we stand, or not? As of now, the court order says we do.

The AG takes an example of his childhood during World War II, where the British would play a "propaganda reel" before each film.

But it’s significant that AG Venugopal gave the example of a colonial era practice – that of playing a British propaganda reel – to demonstrate what the playing of the national anthem can do to instill loyalty. What can we infer on what the government’s thinking is on this issue from that action alone? The answer, as they say, is blowing in the wind.