In the seventh edition of this magazine on March 15, 1976, we carried a cover story on India’s growing population and how it should be controlled. This was during the Emergency and at that time, the Congress party announced a National Population Policy, which detailed population control measures. The intention was noble but the implementation brutal. During the Emergency, most Opposition leaders were incarcerated. The government had untrammelled powers and went about implementing the sterilisation programme with a heavy hand. Doctors and bureaucrats roamed the countryside with sterilisation targets. Between 1976 and 1977, over eight million people were sterilised, some of them forcibly. This became a huge political issue in the 1977 general election in which the Congress party suffered a dramatic loss and Mrs Indira Gandhi lost her seat too. The coercive family planning campaign was widely seen as a major factor in the Congress defeat. That defeat seemed to have traumatised India’s political class and population control became an unspeakable term in the national discourse. 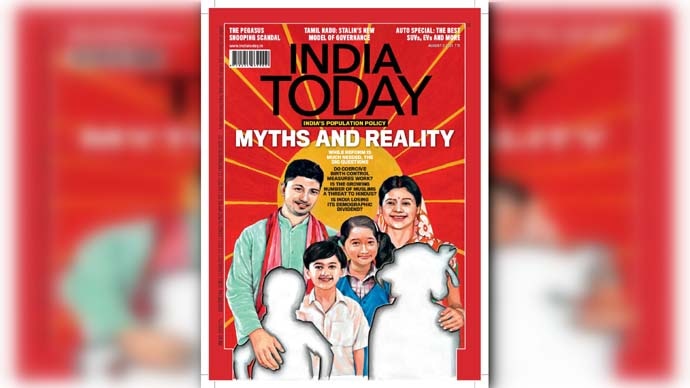 On July 11 this year, the subject sprung back into the national consciousness when Uttar Pradesh chief minister Yogi Adityanath unveiled his state’s new population control policy to reduce the population growth rate to 2.1 per cent over the next decade. The policy incentivises the two-child norm both for government employees and private citizens. In 2019, Prime Minister Narendra Modi had flagged the country’s population challenge in his Independence Day speech and warned that a ‘population explosion’ could cause problems in the future. Modi recommended that both the Centre and the states launch measures to tackle the problem. However, Yogi Adityanath’s policy announcement in the run-up to the UP elections, due early next year, has sparked a polemical political battle, with the Opposition parties accusing the state government of using the issue to polarise voters on religious lines.

We are projected to overtake China as the most populous country by 2027. The brouhaha over UP’s announcement has raised fresh questions about India’s population growth and its policies. Our cover story, ‘India’s Population Policy: Myths and Reality’, written by Deputy Editors Kaushik Deka and Shwweta Punj and Senior Associate Editor Sonali Acharjee, answers the big questions around this debate. Is the population growth rate of Muslims a serious threat to Hindus? Is India still facing a population explosion? Are coercive methods, like those proposed by the UP government and currently prevalent in other states, deterrents? Is there a risk that India could lose the advantages of a young labour force—the so-called demographic dividend—if it pursues an aggressive population control policy? Each of these questions has several associated myths that warrant a reality check.

The one fear that Muslims will overtake Hindus in numbers is not based on facts. Population growth rates of all religious communities, including Hindus and Muslims, are declining. Yet, while UP and Assam have been voluble about demographic worries, the measures they have taken or proposed are no different from what 11 other states, such as Maharashtra, have enacted in the past. There is, fortunately, nationwide acceptance of voluntary population control measures. Nitish Kumar, the chief minister of Bihar, India’s third most populous state, has argued that focusing on women’s education can decrease the fertility rate. Economic development and women’s empowerment, as we’ve discovered, are effective contraceptives.

While it is necessary to check population growth, coercion rarely works. China’s strict one-child policy of the 1970s resulted in sex-selective abortions, depressed fertility levels, irreversible population ageing, labour shortages and an economic slowdown. China abandoned the one-child norm in 2016 and is now officially encouraging a three-child policy. Experts we spoke to are in agreement that instead of a punitive exclusionary approach, the focus should be on sensible, inclusive measures, like spreading education and awareness about family planning, making contraception options easily available, incentivising later marriages and childbirths, and promoting women’s participation in the labour force. Short-term electoral gains should never dictate any approach to population control. Development remains the best contraceptive and demographics is inseparable from economics. India is witnessing a demographic dividend—with an average age of 29 years, we will, by 2026, have the world’s youngest population. Young demography propels growth and creates demand. The Economic Survey of 2018-19 notes a slowdown in population growth but a significant increase in the share of the working-age population this decade. The national Total Fertility Rate will be below replacement levels this year itself. Still, the working-age population would grow by roughly 9.7 million people per year between 2021 and 2031 and 4.2 million per year between 2031 and 2041.

All the economists we spoke to emphasised the need to harness our demographic dividend by keeping our people gainfully employed and raising their productivity. This is clearly not happening now because 41 per cent of our workforce is still engaged in agriculture, which contributes only 15 per cent to the GDP. Not to forget that India has the maximum number of poor people in the world—364 million or 28 per cent of our population. If we don’t address the issue of population growth in consonance with economic prosperity, we will only be adding to people’s misery. This needs to be done without encroaching on the individual’s civil liberty, as was seen during the Emergency. We also need to avoid unintended consequences of population control like female infanticide. A delicate balance must be struck.

We need to look at the ideal population figure that can be supported by our resources and work towards that. Without a holistic approach to our population problem, India’s demographic dividend remains in danger of becoming a demographic disaster. To ensure that does not happen, population planning must remain a subject of continuous public discourse. I am glad that taboo has been broken.

Also read: Nothing must stop India from giving family planning the Budget it deserves