NRC: What the global elite should know before issuing warnings of genocide in Assam

Intellectuals do not know the National Register for Citizens is a result of the movement for Assamese identity which aims to defend the vulnerable.

It is a bizarre situation. A group based out of New York, AVAAZ, as well as other Delhi-based progressive secular intellectuals, backed by the world of Twitter, are giving dire warnings about an impending genocide in Assam. Yes, nothing less than a genocide. But some of the most socially engaged Assamese intellectuals are supposedly sleeping over it, least concerned about the unfolding disaster!

What is going on?

A statement has been issued by the 'Forum Against Citizenship Amendment Bill' comprising progressive Assamese intellectuals, who have come together and opposed an online campaign by AVAAZ and United Against Hate. These campaigners, particularly AVAAZ, fear that the ongoing process of drafting the National Register of Citizens (NRC) will disenfranchise millions of 'minority Muslims'. They warn that there is going to be genocide in Assam.

The problem with these campaigners is that they do not understand anything except what is given in the thin and abstract language of the international human rights regime.

AVAAZ says in a statement, "India is going to delete as many as seven million Muslims in Assam state from its master list of 'citizens'... This is how genocides begin..." 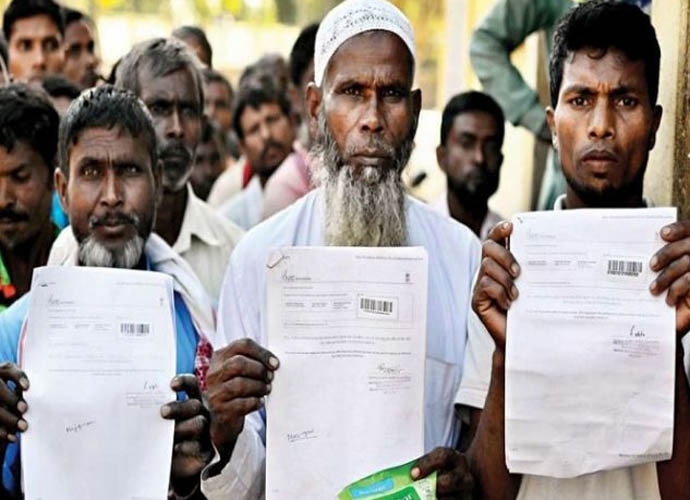 There is nothing between 'India' and the 'seven million Muslims'. There is 'India' and there is 'bare life', the about-to-be-stateless-and-thrown-in-detention-centres Muslim. In invoking 'India', they refuse to cognise the myriad democratic forces and progressive groups that were part of the process leading up to the NRC. They also ignore those on the ground who oppose the NRC as state-backed Assamese chauvinism.

'India' qualifies as a big-ticket target, with international visibility, while the socially embedded processes are too local and unglamourous for these international players to evoke any interest. They want to summon the international democratic court or 'world public opinion' to defend 'minority Muslims'. The statement exclaims: "The world is watching." This 'world' we must all defer to is nothing but the network of virtue-signalling campaigners backed by an international human rights (UN-type) bureaucracy and 'conflict resolution experts'.

In another statement AVAAZ calls upon the government to ensure that "The rights of due process are honoured, specifically that no one is detained or deported without the right to counsel and a fair trial that meets international standards."

This is nothing but an invitation to the international bureaucracy and the UN for 'conflict resolution'. Responsible political forces on the ground are thereby effaced or will now be consulted as 'stake-holders'. These campaigners are trying to push their way in and speak on behalf of the victims of this already declared looming 'genocide'. This is radical one-upmanship.

What we see is a very suspect over identification with the marginalised, the 'last man'. This is done by overlooking any dense social relations, counterposing the marginalised figure to an abstract global category. The marginalised is imagined to be an abstract figure, a 'migrant' who is crossing borders just to prove the liberal elite right in imagining a world without borders and nations. The 'minority' or the 'Muslim' is constructed in the light of the elite's own fantasies.

This hyper-ventilation about 'vulnerable groups' and the incarceration of the stateless in detention centres distracts from progressive processes on the ground. It dehistoricises the basis of the NRC in the Assam Accord (1985) and the movement for Assamese identity which was fought precisely to defend the vulnerable.

Virtue-signalling intellectuals have no clue that the National Register for Citizens is a result of the movement for Assamese identity which thinks of itself as oppressed and vulnerable — not a 'right-wing' cause at all! What is forgotten is that Assam as also the Nagas or the Manipuris in the Northeast have been struggling since decades for their right to the self-determination of oppressed nationalities. The 'rights' of the stateless Muslim or of the Bengali Hindu must be understood in this light.

A recent piece rightly counter-balances the narrative by showing that in Assam there is no one pure marginalised (like, say, the 'Muslim' or the Barak Valley Bengali Hindu) such that the rest of the communities are all deemed oppressors. It is a shifting terrain.

Just because in an atmosphere of Islamophobia today the international human rights regime finds it easy to portray the Muslim as the most preferred minority, the specificity of place and context, of real political forces in Assam cannot be erased. This would be like McDonaldisation in the guise of promoting human rights! Virtue-signalling against genocide as a form of McDonaldisation!

They forget that the Muslim is not always a 'Muslim' in the global sense but is also an Assamese Muslim, a Bengali Muslim and so on. A section of the Bengali Muslims in fact supports the NRC from the standpoint of (Assamese) indigeneity. 'Minority Muslim' cannot be seen as again separate from indigeneity or from his rootedness in Assam, Bangladesh or Sylhet.

In fact, let us suppose that the Assamese intellectuals are wrong and that the genocide against seven million Muslims is indeed about to take place. Then, what?

What this would mean is that the seven million Muslims would rather launch a powerful political movement for their own defence rather than submit to the UN bureaucracy and live in UNHCR camps or rely on the protection provided by 'the world is watching' stance. And this political movement, from the standpoint of, if you like, the right to self-determination of oppressed Bangladeshi or Assamese Muslims, would happen precisely from within the space opened by the many self-determination movements and political forces that are already present in the Northeast — it is also from such a space that the Assamese intellectuals rebutted the international campaigners.

The point is that a generic defence of stateless Muslims within the outraging echo-chamber of social media even when done by evoking the fate of Hanif Khan who committed suicide is not the way to go.

What is at stake in the kind of emerging polarisation of the debate between global campaigners and 'India' is the effacement of this radical political space - a space which is really connected to the sentiments of large masses of progressive thinking ordinary people in Assam.

Maybe in many places in the world afflicted by conflict such a space is no longer an option. Years of corroding conflict on all sides might have sealed such possibilities. That might be the case with the Rohingyas in Myanmar or with the Hutu-Tutsi conflict, or the Yazidis in Syria, where the last hope might be 'the world is watching' stance. Where however such spaces do exist, as is clearly the case with Assam, the global human rights elite might want to act differently.

Given their global reach and American connection, such elite campaigners must be further contextualised. This came out clearly during the 2016 US presidential elections.

It is easy to attack Donald Trump for being anti-immigrant today but let us recall how Trump's presidency was enabled by many progressives who preferred Hillary Clinton over Bernie Sanders. Clinton is too connected to Wall Street, international NGOs (is AVAAZ one of them?) and the liberal imperialist project. Sanders is too connected to the working classes but he does not keep uttering politically correct buzzwords like Clinton — and clearly that is a crime! So Sanders is portrayed as racist while Clinton is progressive and pro-human rights. The consequences of this Clinton versus Sanders battle is playing out in Assam today as a New York-based NGO pontificates on the NRC.

Trying to install an international human rights bureaucracy by deftly suppressing the myriad ground-level political forces is precisely fertile ground for right-wing forces like the BJP. I had earlier pointed out the devious deftness of the Indian secularist in finding ways regarding 'how not to fight Modi'.

If anything the global discourse on the 'Muslim' is sure to provide Hindutva proponents a fertile ground to expand in the Northeast. So far, the issue of indigeneity, be it Assamese or Bodo or Muslim or Sylheti Bengali, has blocked the BJP's full-blown Hindutva agenda in the Northeast. The entry of deracinated, generic categories like 'Muslim' and 'Hindu' will destroy this bulwark provided by indigeneity, and in particular, its relationship with some kind of progressive 'oppressed nationality' politics.

I think it is time to read a text which inspired many nationalistic movements in the Northeast. I am referring to Lenin's 1914 text, The Right of Nations to Self-determination. Taking a cue from this text, radical activists might want to use the mobilisation around the NRC to create a real sense of solidarity among all oppressed in Northeast.

Questions must be asked if the NRC is itself a tool of Indian state hegemony now working through the Hinduised writ of a minority Assamese elite backed by the BJP. Or, instead, does the NRC convey the sentiments of the oppressed nationalities? One must revisit key interventions on Assamese chauvinism by those like Hiren Gohain (a signatory to the above statement) and Vaskar Nandy.

Such an embedded political movement should be able to handle the tensions among the people, turn the tension between say a Bangladeshi Muslim 'non-citizen' and an Assamese 'citizen' into what Mao Zedong would call a non-antagonistic contradiction.

International human rights bureaucrats trying to get a foothold through virtue-signalling about an imminent genocide can and must be kept out. Delhi-based Hindutva and secularist pundits too must be kept out to facilitate a positive outcome in Assam today.

Post your comment
#Avaaz, #Assam citizenship, #Genocide, #NRC
The views and opinions expressed in this article are those of the authors and do not necessarily reflect the official policy or position of DailyO.in or the India Today Group. The writers are solely responsible for any claims arising out of the contents of this article.