The riot was not a clash between communities, it was a pogrom, and students deserve to know that.

The 2013 Muzaffarnagar riots almost did not take place, if the Uttar Pradesh government’s spree of withdrawing cases is anything to go by. And now, the 2002 Gujarat riots, one of the deadliest communal massacres in the history of independent India, were not anti-Muslim.

The National Council for Educational Research and Training (NCERT), which decides textbooks for CBSE students across the country, has decided to drop the community-specific reference in the political science books for Class 12.

The book, however, still describes the riots, and is critical of the state government’s role. NCERT officials maintain it is a “minor change”. They could not be more wrong. 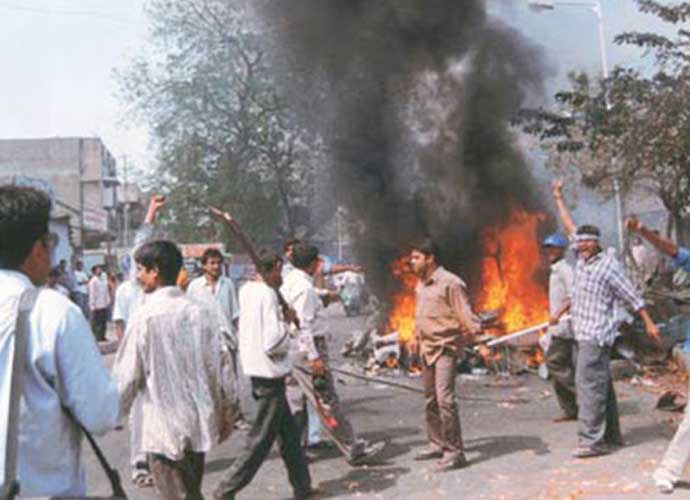 The change in nomenclature is not a mere rewording, it is a rebranding. It seeks to sanitise, and de-politicise, what was a targeted attack on the Muslim community, aided and abetted by the state machinery, then, and now, helmed by the BJP. Every riot, every act of violence is condemnable. But the 2002 riots stand out for the sheer scale of brutality, the concerted hunting of a community they witnessed.

More importantly, it insults the memory of the victims, who were attacked for the very religious identity the NCERT now seeks to politely erase.

Students have a right to know the violence for what it was – a pogrom – and deleting the name of the victim community robs them of that. That this is being done when the BJP is in power at the Centre, and then Gujarat CM Narendra Modi is the all-powerful prime minister now, makes the “minor change” majorly suspicious.

Numerous witnesses, activists, journalists within India, and observers from other countries, have repeatedly stated that the 2002 Gujarat violence was not a spontaneous clash between two communities, it was a revenge riot presided upon by an indulgent state.

Coming in the aftermath of the Godhra train burning, in which kar sevaks returning from Ayodhya were burnt alive, the riots saw Hindu mobs kill, rape and displace thousands of Muslims. A 2012 report in The Guardian states: “The killers may have been in touch with police and politicians. According to the 2011 Amicus report, two cabinet ministers even sat in police control rooms. A senior police officer and minister, murdered in 2003, claimed that Modi explicitly instructed civil servants and police not to stand in the killers' way. Of course, Modi has always denied involvement and condemned the riots.”

The nature of the riots, thus, was very specific, and one of the bloodiest expressions of the ideology that the BJP believes in - India belongs to Hindus, and no attack on the community is to be tolerated.

Deleting the “anti-Muslim” reference to them de-links them from the very factors that made them that lethal, and continue to make them especially significant. More so, considering that even the justice system has seemingly been unable to stay blind to the religion of the victims and the perpetrators.

The trial in the Godhra train burning case concluded in March 2011 in the special trial court, convicting 31 people, of whom 11 were sentenced to death and the rest awarded life in prison. In October last year, the death sentence to life imprisonment. The government was directed to pay compensation of Rs10 lakh each to the families of 59 people killed in the train fire.

The trials in several riots cases are pending in various courts across the country. In August last year, the Supreme Court set aside a Gujarat HC order directing the state to pay for the damage and destruction of religious sites during the riots.

As several elections in the recent past have shown, most political parties increasingly seem to think Muslims are electorally insignificant, with few parties fielding candidates from the community. Even prominent liberals seem to think assertion of Muslim identity - wearing burqas, skullcaps in public - is somehow “too Muslim” for comfort.

Now, the NCERT seeks to rob them of their identity in the context of victimhood, another step towards the slow erasure of Muslims grievances, Muslim quest for justice, and thereby the Muslim voices.

The 2002 riots need to be called “anti-Muslim”, to remind students, and the country at large, of exactly what they were - an attack on one section of Indians by another, whose minds were enflamed by communal rhetoric, and the flames fanned by the state that had then insulted the rights of Muslims as equal citizens, and is now seeking to insult their victimhood.

Also read: In India, 18 women die of TB every hour: Why have we stopped caring?