Between Newton and Naxals, India's Oscar entry tears into our hypocrisy

The Dandakaranya forest of central India is the site of the bitter armed conflict of between the State and its "single biggest internal security challenge" - the Naxalite movement. It is director Amit Masurkar's deliberate choice for the setting of his film Newton, now selected as India's official entry for the Oscars 2018.

He has his reasons for doing so. He has set out to tell a story about India's democracy (or the lack of it) and it is the battles in Dandakaranya that, for him, best represent the "ideological differences on democracy".

Masurkar, in an interview, points out: "Naxals are not asking for a separate country... The battle is from the ideological differences on democracy. Naxals want to bring a change in democracy by establishing a communist rule." Newton thus is his attempt to honestly engage with issues of democracy.

Masurkar's story is from an urban middle class point of view: " I was very clear that my gaze was from Newton's perspective, because there was no other way of looking at this story. And that was so because I'm a boy from the city, I cannot pretend to alter my gaze; I had to be very conscious of that."

Newton, the idealist Dalit upper division clerk with his punctilious purity, is the middle class' dream "honest babu". This largely stems from the illusion that, if there were more incorruptible officials in the state machinery, all would be well with our democracy.This naïve middle class view has bought into the ruling class propaganda narrative that India is the world's largest democracy. It unquestioningly accepts the glib assumption that mere elections, every five years, are sufficient to achieve genuine democracy.

The booth matters to whom?

Factors such as empowerment of citizens, participation in political decision-making, and guarantee of basic human rights - which should be the essence of any government claiming to be "of the people, by the people, for the people" - have no place in this narrative. The narrow morality of this middle class view is satisfied merely if elections are conducted according to the rules in a relatively less corrupt manner.

There is, however, another middle class view that is far from naïve and openly cynical, even immoral. This view, represented in the movie by an upper caste paramilitary assistant commandant, Atma Singh, is actually the real ruling class perspective, shorn of pretence that comes with propaganda.

It has scant regard for democracy, particularly when it seems to clash with the interests of the "nation" - a word which is mostly used to denote the classes in power. Forget the essential factors of democracy mentioned above, here even its electoral semblance becomes a burden that is better fabricated or even dispensed with. This view too is held by significant sections of the middle classes, particularly by those who belong to the upper castes or the security forces.

Anyone dissenting and challenging the ruling paradigm is an enemy. For instance, the film shows the security forces referring to the Maoist-influenced areas as Pakistan. This is a term often indeed used by the officers of the police and the paramilitary forces who are involved in operations in conflict-torn areas.

This, in one sweep, converts the tribal citizens into enemy aliens, who then only deserve to be dealt with the brute force of the gun.In the film, Atma Singh hands Newton his AK-47 automatic rifle to validate the weighty burden of the nation he carries. The foul irony of having to use a weapon of the nation against one's fellow citizens is lost on him - as it would be on most officers of the paramilitary deployed in India's several conflict zones. This scene aptly characterises the dubious moral self-belief of being the ones shouldering the yoke of the nation that justifies and rationalises the deliberate ditching of democracy and even a no-holds barred war on its citizens. 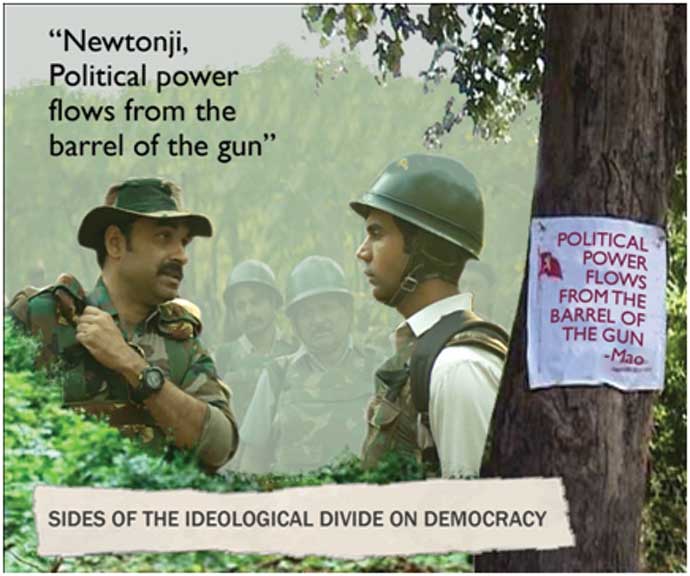 On the other side is the Naxal standpoint, which propagates an unequivocal boycott of elections. It professes to be based on a strong commitment to democracy. It brands the present system's claim to democracy a fraud; it calls for a new democratic revolution to establish a truly democratic system.

The press release issued by the main Naxal party, the CPI(Maoist), during the 2014 parliamentary elections, was titled: "Boycott the sham parliament & assembly elections! Make the New Democratic Revolution successful! The building of an Indian people's democratic federal republic based on genuine democracy and self-reliance is the only alternative!"

Stripped of all jargon, the Naxal contention is that the Parliament and assemblies formed through the elections are mere tools in the hands of the rich ruling classes. They serve the interests of the big corporates and landlords, and thus can never be true vehicles of democracy.

The alternative which the Maoists have built in the areas they control is a parallel government called the Janatana Sarkar or People's government. This government, which has now been in existence for well over ten years in Dandakaranya, witnesses a high degree of participation by the local people. They implement land distribution, run small industries and irrigation schemes and have their own primary networks for education, health and justice delivery. They thus lay claim to having an alternative model of development based on a more democratic system of governance.

The side of the adivasis

The Naxal claim to a democratic alternative is, of course, contested - not only by the government, but also by many middle class intellectuals. The Janatana Sarkar model is limited to one of the country's remotest parts and there are doubts about how it could be replicated in other pockets.

For the inhabitants of Dandakaranya, however, the choice is apparently clear. The portrayal in the film approximates reality - the armed paramilitary is the main - often the only - contact of the locals with the Indian state; the sight of the paramilitary uniform sends the villagers into hiding; they have nothing to do with the parliamentary electoral process unless forced to vote by armed personnel. There is thus an almost absolute rejection of the Indian democracy - as they know it - by the local citizens. The armed paramilitary is the main - often the only - contact of the locals with the Indian state.

The film is also careful not to make the blunder of equating the EVM illiteracy of villagers with ignorance about democracy. It, in fact, provides a glimpse of their confidence in the robustness of their own democratic processes. In one of the scenes when the arguments between an armed Atma and unarmed Newton grows particularly vicious, it is the village leader who is shown to self-assuredly step in with an offer of dispute resolution through the local justice delivery system.

It is not only the poor villagers who are shown taking sides, away from the Indian state. The middle class adivasi, represented in the film through the school teacher Malko, spurns the offer of a bullet-proof jacket from the government armed forces - an act symbolic of her assertion of whose side she is not on.

Masurkar's quest to explore the ideological divide on democracy studiously stops short of sharp side-taking and solutions. His honest portrayal is sufficient, however, to highlight the hypocrisies in the state's claims to democracy. It is also sufficient to tell you that mere Newton-type incorruptibility and punctuality cannot be the remedy. He tries to tell you where various players in the conflict stand.

He leaves you to decide which side you are on. And he does not leave any serious citizen the option of remaining neutral.