A unique collaboration between Jonas Brothers and US President Joe Biden has taken the internet by surprise as they use Instagram and TikTok's viral Bing Bong trend to drive a message home.

There is something about sending a message and catching attention by doing something unexpected of you. It works every damn time.

So, US President Joe Biden collaborated with the Jonas Brothers - Kevin, Joe and Nick - to recreate a TikTok trend called Bing Bong. Here's the video we are talking about:

NOW: WHAT IS THE BING BONG TREND?

The Bing Bong trend started from the Instagram street show, Sidetalk, first as the sound of subway doors opening in the show’s intro, and later evolving into the famous audio track. The specific portion of audio that went viral began with Gorilla Nems saying his own version of “Bing Bong” as approval to what people said to him.

TikTokers have since taken different phrases from various Sidetalk episodes and used them in a slew of videos. The most prevalent “Bing Bong” TikTok trend takes a portion of the original April 2021 video featuring the catchphrase and the voice of a Coney Island man named TJ, who called President Biden “Joe Byron”.

Nick, Kevin and Joe Jonas shoot the entire video in the lavishly decorated White House with a nice twist in the end.

Joe starts off with the infamous "Bing Bong!" and then Nick pops up beside him to say, "Are you vaccinated?" 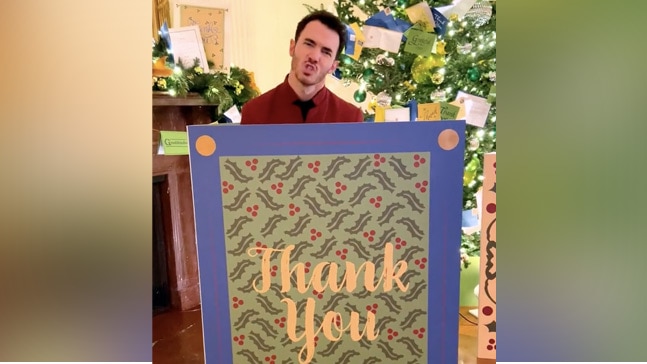 Kevin pops out from behind and says, "Yes, Sir!" The video cuts to the brothers on the couch, where they finish out the iconic “What’s up baby. Take me out to dinner” phrase. At the end Nick, Joe, and Kevin ask, “Did you get it?” and the camera flashes to President “Byron” himself holding a phone and responding, “We got it.”

A fun video like this almost always drives the message home and becomes a memorable conversation starter, don't you think?

#Viral Video, #Instagram trend, #Bingbong trend, #Jonas brothers
The views and opinions expressed in this article are those of the authors and do not necessarily reflect the official policy or position of DailyO.in or the India Today Group. The writers are solely responsible for any claims arising out of the contents of this article.