The 24x7 news cycle on February 15 was dominated by just one name - Nirav Modi. A diamond merchant and entrepreneur of international repute, Nirav Modi, allegedly committed a mega banking fraud. As per allegations levelled by the Punjab National Bank (PNB), the fraud amounts to Rs 11,360 crore.

He may be a famous name in business circles - was present at the World Economic Forum in Davos, Switzerland, as part of a delegation of Indian businessmen and corporate leaders that accompanied Prime Minister Narendra Modi - but to the ordinary Indian, Nirav is just another successful, uber-rich man who hardly ever makes an appearance on their social media newsfeed. For those who don’t know who exactly is this man, here’s the low-down:

1) The 47-year-old is the founder of a brand after his name, owned by the firm Firestar Diamond, a $ 2.3-billion jewellery company. His brand is one of repute and his clientele stretches across three continents, with stores in Mumbai, London, New York, Las Vegas, Hawaii, Singapore, Beijing and Macau.

2) Born in India, Nirav grew up in Antwerp, Belgium, and comes from a family of diamantaires (master diamond cutters). According to reports, Nirav, like many other famous entrepreneurs around the world, is a college dropout. 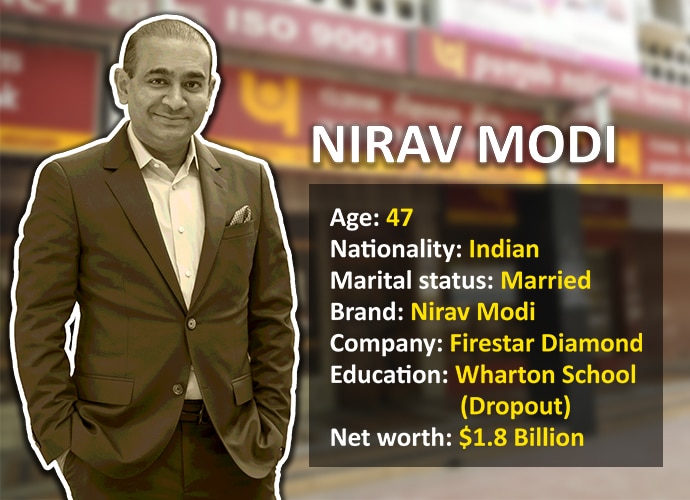 3) Nirav’s grandfather Keshavlal Modi was a diamond merchant in Surat who started selling diamonds in the 1930s. About a decade later in the 1940s, Keshavlal moved to Singapore. In the 1960s, father Deepak Modi moved to Antwerp to expand the diamond business. He sold raw diamonds to customers in India.

4) At the age of 19, after quitting the Wharton School, Nirav joined his uncle Mehul Choksi in the family business, Gitanjali Gems. Incidentally, Choksi too was booked by the CBI on January 31, for allegedly cheating PNB of Rs 280 crore.

6) Nirav’s designer jewellery pieces cost anywhere between Rs 5 lakh and Rs 50 crore. According to Mint, Modi was the first Indian to feature on the cover of a Christie’s auction catalogue in 2010 for his Golconda diamond necklace that fetched $3.56 million at a Hong Kong auction. In 2012, his Riviere diamond necklace was sold for $5.1 million at a Sotheby’s auction in Hong Kong.

7) Nirav is a "philanthropist". In 2008, he, along with his wife Ami, set up the “Nirav Modi Foundation”. The charitable trust scouts talented children from slums and schools; and under a programme called "Paramonnati," Nirav mentors these students and financially supports them through college until they are able to support themselves. The foundation currently sponsors more than 32 students.