The first phase of Noida International Airport is set to be completed by 2024. As the PM lays the foundation stone, we bring you 10 interesting facts about the new airport.

PM Narendra Modi laid the foundation stone of the new Jewar airport, or the Noida International Airport, earlier today. The airport has been in news for several years now. And for good reason. 1. DUBBED TO BE ASIA'S LARGEST AIRPORT The proposal to build the Noida International Airport was floated by Defence Minister Rajnath Singh in 2001, the then Uttar Pradesh Chief Minister. This was taken forward by his his successor Mayawati, who acquired 2,000 acres for the airport. But there was a problem. The proposed airport was within 150 kilometres of the Delhi airport (the Indira Gandhi International Airport), and this violated a policy: there couldn't be an airport within 150 kms of the Delhi airport.

Also, not many know that in 2001, Rajnath Singh also inaugurated the DND Flyway, the artery that connects Delhi and Noida.

The Jewar airport will serve the people of Western UP, Delhi, Haryana and Rajasthan. The airport will also be connected to the Delhi-Mumbai expressway near Ballabhgarh in Haryana. 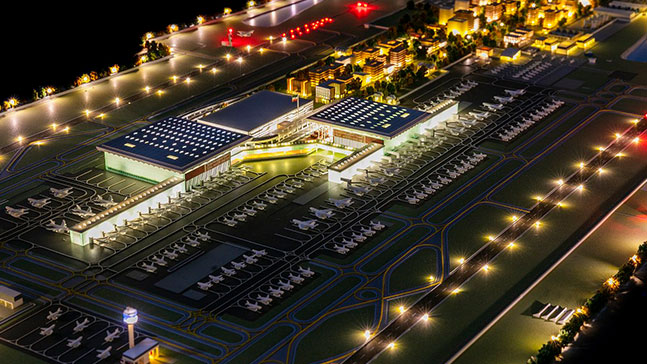 A layout of the Noida International Airport in Jewar. Photo: Getty Images

There were only two airports in Uttar Pradesh in 70 years. In the last 7 years, this is the 10th airport to be built in the state. With Jewar, UP is the only state in the country to have five international airports (the others being Lucknow, Kushinagar, Ayodhya and Varanasi). A moment of pride for the people of UP.

Of the 1.2 crore passengers expected, 90 per cent would be domestic, the airport developing company Zurich Airport International AG said. The company, which won the bid in November 2019 to develop the airport, says that once the final phase is complete, the airport’s carrying capacity would be around 70 billion. That’s huge.

7. METRO CONNECTIVITY BETWEEN IGI AND JEWAR AIRPORT BEING WORKED UPON

Reports also say that for the convenience of people, a Metro connectivity between IGI Airport and Noida International Airport is being worked upon. The plan is in the initial stages and as the first phase of Noida airport is completed in 2024, we might hear more on this development.

8. RS 4,326 CRORE FOR THE REHABILITATION OF PEOPLE

Since 1,324 hectares of land has been acquired, the government is expected to spend around Rs 4,326 crore on rehabilitation and resettlement of the people. Civil Aviation Secretary Rajiv Bansal said that the PM is personally monitoring the project.

10. WILL BOOST TOURISM IN AGRA AND MATHURA Since the airport is 130 km from Agra and 86.3 km from Mathura, it is bound to boost tourism in Uttar Pradesh. For the visitors of Taj Mahal, Agra, or the temples in Mathura, the Jewar Airport will be the perfect landing destination.