The final draft of the National Register of Citizens (NRC) has finally been released. It was a list that the 3.29 crore people of Assam had been looking forward to.

Out of 3.29 crore applicants who had applied for a mention in the list, over 2.89 have been found eligible for inclusion in the completed draft after it was released on July 30. Security was beefed up in the state ahead of the release of the final draft of NRC. (Source: Reuters)

People stood in meandering queues to check if their names figured on the list. Some faces showed relief, some stress and some looked angry about how the documents submitted by them weren't enough to prove they were citizens.

Stories of hope and despair

Forty-five-year-old Mojira Begum is very worried as her name is missing from the second list too.

"I had given all documents. I am very worried about what will happen now. My name is not in both the lists. They (officials) have told me to come on August 7. Names of my other family members have been mentioned on the list," she said.

Raisuddin Ali (49), a resident of Kahikuchi area of Dispur, was happy to have his and his son's name on the first list and is now happier that his wife Lily Begum could make it to the second list.

A lot of people faced Ali's situation because while some members found their names on the first list, others within the same family had to wait for the second list.

The wait for Mustafa Ahmed (44) is not over because the names of two of his family members are still missing from the list.

Six members of his family, including him, did not find their names on the first list, while four people have now made it to the NRC, his wife and youngest son haven't been lucky enough.

Mustafa says, "I will have to now approach the NRC centre with my plea to get the names on the list.

Moina Begum (52) is confused about her emotions because her father-in-law's name is missing but she has made it to the list.

Similarly, 42-year-old Mohammad Jamal Ali has his name in the list but the his father Gani Sheikh's name is missing. Strangely, he claims his own name has been included on the basis of his father's credentials.

Ali said, "My entire family is in the NRC now but my father's name is not there. My father is an ex-serviceman but his name has been omitted. I am worried but I know that it will be rectified."

There are some who were not able to submit all relevant documents so are doing so now.

Some are completely dumbstruck because while their names figured in the first list it has gone missing in the final draft. 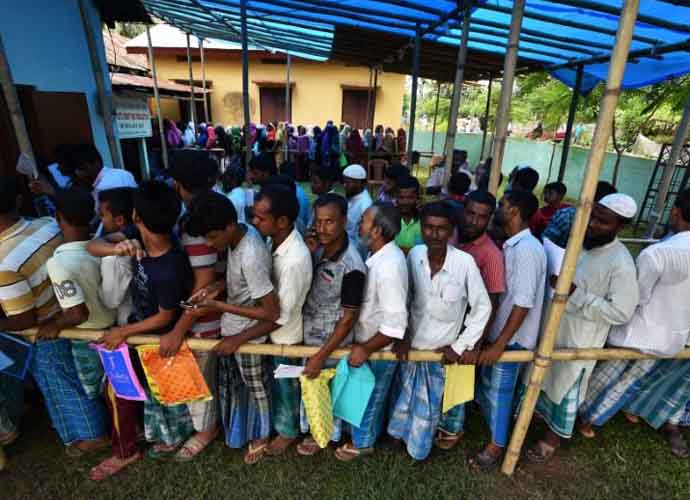 Ahead of the release of the draft, adequate security measures were taken by the Union home ministry. (Source: Reuters)

The first draft of NRC was released early this year with names of around 1.90 crore people out of the total 3.29 crore applicants recognising them as legal citizens of India.

Prateek Hajela, the NRC state coordinator, and his team of officials published the second draft of NRC.

Ahead of the release of the draft, adequate security measures were taken by the Union home ministry.

The Union Home Ministry deployed 22,000 central paramilitary troops in order to beef up security in Assam and adjoining states to ensure peace and maintain law and order.

Security has also been beefed up at all 2,500 NRC Seva Kendras (NSKs).

The NRC updation process was undertaken in Assam following Supreme Court orders to identify the illegal foreigners residing in the state.

The Supreme Court had stated that all Indian citizens, including their children and descendants, who have moved into Assam post March 24, 1971, would be eligible for inclusion in the updated NRC on adducing satisfactory proof of residence in any part of the country (outside Assam).

Large-scale illegal migration from Bangladesh into Assam has led to demographic conflict in the state.

The unabated influx of Bangladeshis has also reportedly put the identity of the indigenous people of Assam under threat.

The list of citizens is being updated precisely to detect foreigners in Assam, which is a political compulsion for the BJP, which had stormed to power in the state on the promise of doing away with illegal immigrants.