How close are we to nuclear world war?

Kim Jong Un's mouthpiece warning nuclear 'war is now in inevitable' between the United States and North Korea is worrisome.

It appears that the stage has been set for destruction of epic proportions. A nuclear war that could plunge the planet into a dark apocalyptic pit seems just around the corner, as North Korea has declared that "war is now in inevitable" between Pyongyang and Washington.

Over the past few weeks, the two countries and their heads of state – US president Donald Trump and supreme leader of North Korea Kim Jong Un – have used international forums and even the social media to indulge in rounds of verbal sparring, which has usually ended in one issuing warnings to the other to back off or be ready to face "fire and fury".

But with Pyongyang testing an intercontinental ballistic missile (ICBM), the Hwasong-15, which it claims can bring any location in the United States mainland within the reach of its nuclear arsenal, just last week, stakes are higher than ever. Case in point: North Korea's latest threat.

"The remaining question now is: when will the war break out? We do not wish for a war but shall not hide from it, and should the US miscalculate our patience and light the fuse for a nuclear war, we will surely make the US dearly pay (for) the consequences with our mighty nuclear force which we have consistently strengthened". The latest trigger appears to be North Korea's disapproval of a massive joint military exercise between the United States and South Korea, involving 12,000 military personnel and hundreds of aircraft.

Even though this show of strength is only part of an annual military exercise – “Vigilant Ace” – between the two allies, it is the deployment of sophisticated war machinery in the peninsula that has made Pyongyang more jittery than ever. The US, for the first time in the history of the combat exercise, has included the US F-22 “stealth” raptors precision-bombing aircrafts and B-1B supersonic bombers which, as per reports, the North Korean regime has zero chance of stopping with its antiquated systems.

The foreign ministry of the "rogue nation" has also blamed high-ranking US officials, including CIA director Mike Pompeo, for the escalation of tensions between the two nuclear powers.

For its part, the US — under Donald Trump's regime — has cited North Korea's use of strong language and flouting of international laws in developing and testing nuclear warheads as reasons to justify its actions in the Korean Peninsula. 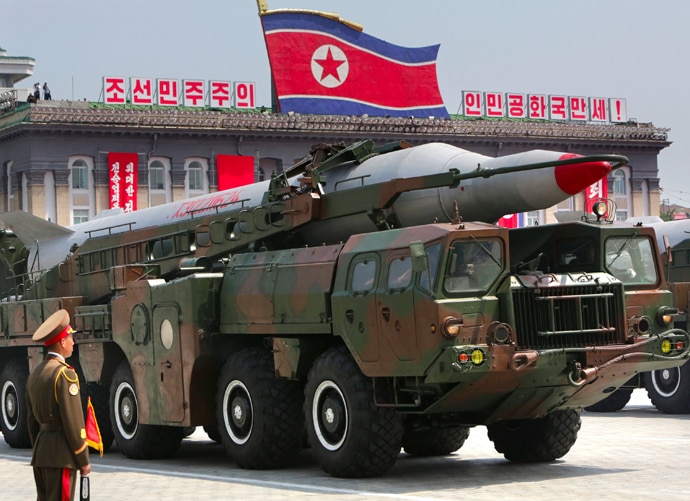 On the verge of a nuclear war?

But with all this happening, what cannot be denied is that the world is slowly, but surely, moving ever so close to what looks like a third world war, one that would bring with it not just "fire and fury" but also nuclear destruction, a fear that even China appears to share.

State-run Jilin Daily, which serves the 23.5 million population province of Jilin along the Chinese border with North Korea, has published a nuclear attack survival guide amid escalating fears of a nuclear war on the horizon. In what it has termed as the "common sense" guide to surviving a nuclear attack or explosion, the daily has urged anyone caught in the fallout of a nuclear attack to try and lie in a ditch, cover exposed skin in light coloured clothing or dive into a river or lake to try and minimise the “possibility of instantaneous death”.

But that's not all, the Chinese Army, sensing trouble, has also staged massive war drills and sent fighter jets over the seas near the Korean peninsula. Even Russia has sent in 1,000 marines and hundreds of tanks to conduct a fire drill on the borders of North Korea.

For those still laughing off concerns of a nuclear war breaking out between the US and North Korea, the news of a Chinese state-run newspaper – notorious for not batting an eyelid without the permission of the state's government – preparing its citizens for such an extreme eventuality and the armed forces of three major world powers – Russia, China and Japan – preparing themselves to jump into an already congested Korean Peninsula just goes to show how close we really are coming to what will be a disastrous third world war between nuclear-armed nations.

The possibility of de-escalation?

Despite such grave concerns, there may be some light at the end of the tunnel. Or not.

According to Russian foreign minister Sergei Lavrov, "North Korea is open to direct talks with the US over their nuclear standoff." Lavarov passed the message to his counterpart Rex Tillerson when the two diplomats met in Vienna on Thursday.

However, as per reports, there has been no immediate response from the United States which still looks intent on maintaining its position and is waiting for North Korea to back off and give up on its nuclear programme before any dialogue begins between the two.

With the stakes getting higher, and waters muddying even more with the entry of China and Russia into the mix, things don't look to be getting any better in the Korean peninsula. With every passing day, we are inching closer to a third world war, but until it eventually does, all we can hope for is good sense to prevail and an end to this standoff caused by the actions of a few trigger-happy leaders from across the globe.

#Kim Jong-un, #Donald Trump, #United States, #Nuclear War
The views and opinions expressed in this article are those of the authors and do not necessarily reflect the official policy or position of DailyO.in or the India Today Group. The writers are solely responsible for any claims arising out of the contents of this article.