Of Taar Roti and Qaliya: The sense and sensual about dipping into a bowl of hot curry!

The taste is not too fiery, the spices are never overbearing and there is a sublime smoothness to the curry — that's what a perfect taar roti and qaliya meal feels like in Rampur!

The arrival of Amreeka wali nani signalled the beginning of the family wedding season.

Fuelled with countless cups of tea and cigarettes — her chief sustenance — the formidable lady set to work, hitching the unhitchable, pairing off recalcitrant, unemployed grand nephews with potential heiresses, lending an open purse to cash-strapped relatives and smoothing over all objections with her loud, rasping voice. Suddenly, there was hope everywhere in the ancient houses edging the narrow gullies as she shuffled her spry, slightly bent form, forging and forcing alliances with tremendous velocity.

For Amreeka wali nani, the institution of marriage was based on two premises — it could solve most problems and the success of every marriage was based on information withheld. She then set to work supervising the arrangements, enjoying the ceremonies, joining the girls singing on the dhol. The bride’s and the groom’s family would quarrel over her — she would smile beatifically.

As all Rampuris, she loved taar roti — the final culmination of the marriage events.

She ate the dish with such gusto that one could believe her dedication to marriage alliances rested on the edifice of her fanatic devotion to taar roti. 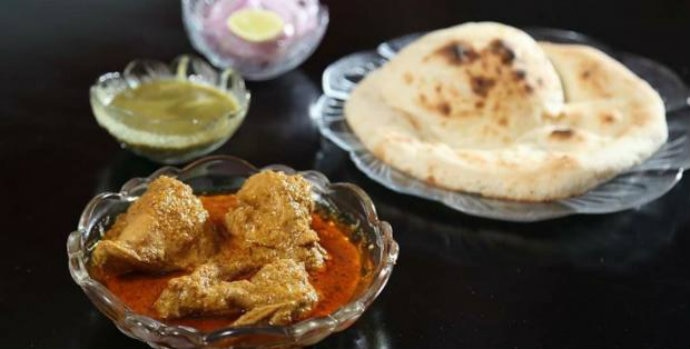 There is something sensual about dipping into a bowl of hot curry, fingers burning, nails emerging dyed yellow with turmeric. (Source: YouTube screengrab)

Taar roti is the main star of the walima — the reception banquet — to announce the nuptials to all khaas and aam.

Traditionally, it has a no-frills, one dish menu — taar roti, the most amazing meat curry served with Tandoori roti, finishing off with sweet rice or Zarda. Some people add Yakhni pulao or Kebabs to the spread, but these are relegated to being side-dishes. There are no drinks or salads to hamper the single-minded focus on the sublime culinary delight.

The basic idea of this simple menu was to feed the entire tribe in celebration — and the tradition continues. The feast begins at around eleven in the morning and continues till around three in the afternoon. Nowadays, the walima is more often held at night in the glittering shaadi ghars dotting the city. The nikah ceremony is generally a simple affair at the local mosque with just distribution of sweets, so the walima is the main feast that everyone looks forward to. Though there has been a recent trend of a wedding feast with a large spread, it doesn’t take away from the simple taar roti banquet that every Rampuri dotes on.

In the ladies’ section, the women struggle out of their black wraps, hand over the salaami envelopes bearing the socially acceptable amount to the hostess, buzz through perfunctory socialising and make their way to the dining tables. Some hit the feast first, before it becomes too crowded and handle the protocol later.

The taar roti is always a sit-down feast served with basic crockery. The pace is hectic as bowls of taar gravy are changed as soon as they grow tepid — the piping hot khameer roti, more than a foot in diameter, is broken into palm-sized pieces by the member of the family supervising the table and handed to the guest. As soon as it finishes, another fresh-from-the-oven piece is inserted into the outstretched hand. The legendary hospitality of the Pathans is on full display.

The guests are just as discerning. They would feel slighted if the rotis are dumped in front of them or if the curry is not replaced. The comment is always on the taste of the curry and the dedication with which it was served. True connoisseurs can even identify the cook — and the butcher. Last night, I feasted on the end of the season walima served with fervent zeal by three of my old students. It was quite overwhelming.

There is something sensual about dipping into a bowl of hot curry, fingers burning, nails emerging dyed yellow with the turmeric. 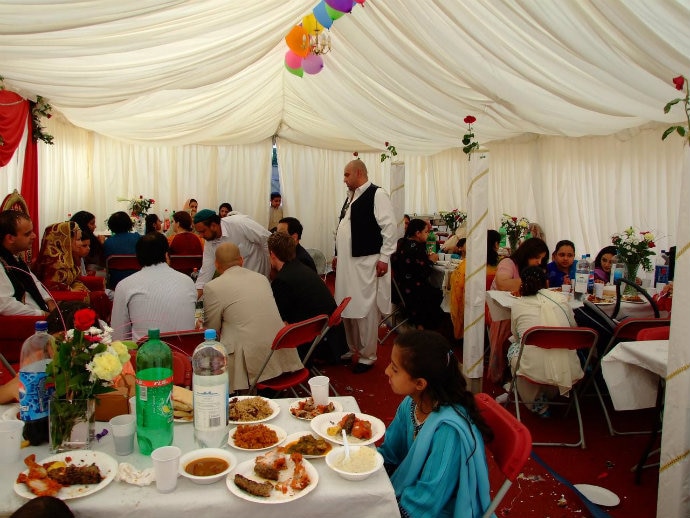 The taar roti is always a sit-down feast. Bowls of gravy and rotis are replaced as soon as they grow tepid. (Source: Wikimedia Commons)

The taste is not too fiery, the spices are never overbearing and there is a sublime smoothness to the curry. The meal doesn’t leave you feeling dyspeptic or too full. In fact, after two to three hours, you find yourself light — and almost ready for another meal.

The generation before ours often went to the feast with a large tiffin or bowl to be filled up and taken home.

My mother tells me that the curry used to be thinner and golden-hued earlier. The word 'taar' probably denotes the consistency and shine of ghee on the gravy which could pour like a thin glistening wire (taar) from the spoon. Nowadays, the Rampuris favour a thicker curry, brimming with shimmery red oil. It is important that the gravy should be easily ‘lifted’ with the morsel of roti along with a piece of meat. This parameter ensures that the meat pieces are never larger than an inch or two.

I remember a wedding feast from my childhood, seated on durries with a low table running the length of the veranda. The curry was served and eaten in earthen bowls. Maybe it was the aroma of asli ghee used at that time, the tinge of earthiness from the bowls or the homeliness of the era before marriage halls became impersonal wedding venues, I have never been able to replicate the taste or experience of that taar roti. We laughed our heads off, watching the fat women (and probably the men) being lifted off the floor with helping hands thrust under their armpits pulling them up!

The curry in taar roti is a qaliya — distinct from the familiar qorma. Qaliya, a term not in current usage, is the basic meat curry with turmeric which might or might not contain vegetables. Turmeric is never used in qorma, which is more elaborate and fragrant. As per the Rampur culinary archives, the technique of qorma was different from that of qaliya. The meat was first mixed with curd, salt and ginger paste and fried with onions for qorma — while the use of garlic and powdered almond distinguished it from qaliya. At times, piloo biranj (powdered rice) was used in qaliya to thicken the gravy.

Recent articles on Rampuri cuisine talk of ‘taar qorma’ as the signature dish of Rampur. The common parlance for the dish in Rampur is taar roti or gosht roti. What we eat in Rampur in the garb of taar roti is not strictly qaliya — but it is not the classic qorma. I would say that it is an elaborate qaliya which has borrowed some ingredients from qorma and dressed up for the occasion. 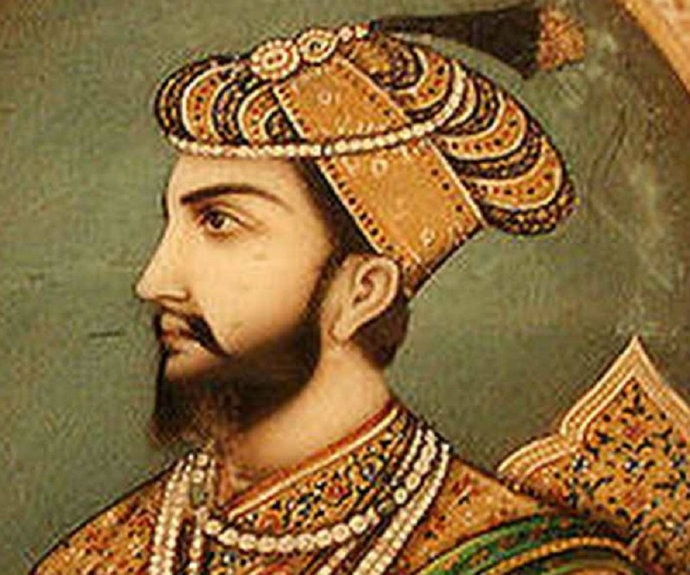 Qaliya originated as a basic meat dish to feed camps in transit during the time of Muhammad Bin Tughlaq. (Source: Wikimedia Commons)

The idea of a qaliya, prepared by slow cooking the meat with all the spices, seems to have originated at the time of Muhammad Bin Tughlaq when he decided to shift his capital from Delhi to Daulatabad in 1327. The enforced mass migration of the army and the populace necessitated a basic meat dish to feed the camp in transit. Thus, qaliya evolved into a basic meat dish into which vegetables could be added.

Recipes of qaliya with turnips, beets and carrots are described in the original archives of Rampur.

Another variant is the chashnidaar qaliya which was sweet and savoury, owing to the sweet syrup added to the curry at the end. This seems to be more popular in Lucknow where a mixture of tastes was appreciated, as in Persia.

Aurangabad has a naan qaliya dish, very similar to the Rampuri taar roti. I ate a similar tel gosht dish at an Allahabad wedding cooked in mustard oil which, I was told, is common in the eastern Uttar Pradesh belt. The general idea remains the same — to feed a large number of people with the least effort. In Rampur, taar roti is also served at teeja and chaaliswan remembrance days after the funeral and at a host of other religious ceremonies involving birth, circumcision and Quran-reading events.

Kundan Qaliya is described by Begum Jahanara Habibullah in her memoir, Remembrance of Days Past: Glimpses of a Princely State During the Raj, as one of the prominent dishes served at the Rampur royal dining table. The Kundan qaliya, added to Mughal cuisine at the time of Emperor Akbar, was a light, golden-hued mutton gravy with turmeric and saffron as important ingredients. It is no longer cooked in Rampur though the taar roti seems to have originated from the basic qaliya. The curry in taar roti is a qaliya. The 'taar' is the ghee, the taste not too fiery, the spices never overbearing — with a sublime smoothness. (Source: Pinterest/Whiskaffair)

In some places like Aurangabad, ground coconut, cashews or almonds are used to thicken the gravy. The Rampur cooks rarely add dry fruits to the dish as it compromises the taste and makes the curry sweet — I wholeheartedly agree.

In an effort to learn the secret of the inimitable curry, I called a khansama to cook a ten-kilo degh at my place for dinner.

Munna khansama cooks the best taar roti in Rampur and is rarely available for small dos. He brought his own spices, specified the meat required and asked us to grind the onions, ginger and garlic. I sat watching him as he lit the wood fire under the massive degh and proceeded to fry chopped onions, casually sipping his tea. He then put in the meat and the ingredients, and sat around smoking and chatting with the servants.

I was convinced that it would never turn out to be his famed sumptuous curry with such lackadaisical effort.

Amazingly, my doubting palate found the same opulent taste in the curry.

My non-Rampuri guests went wild with delight — and I packed some taar roti for them to carry home.