This would impact millions of Indian migrant workers working in the 18 ECR countries.

Often, a small change in a document as vital as the passport makes for an enormous difference in the lives of those affected. However, when the change is as stark as the very colour of that document, all because of a person's poverty and lack of education thereof, the impact is staggering, to say the least.

The Union ministry of external affairs (MEA) notified on Saturday, January 12, that since the last page of passports would be discontinued, containing the valid address proof and other details like parent/s' name/s, spouse, date and place of issuance, as well as the category "Emigration Check Required", those with a tick in the ECR box would be soon getting an "orange", ECR-category passport altogether. This would impact millions of Indian migrant workers working in the 18 ECR countries, notably in West Asia, but also Malaysia, Indonesia, Thailand, among others. Most of the ECR countries are Muslim-dominated and often attract poor Muslim "blue-collar" workers for low-paying, high-risk jobs. 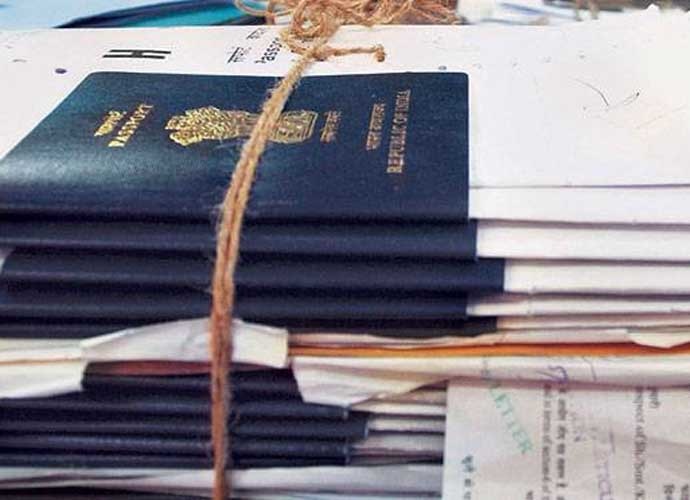 While the issue of removing the address proof from passport is another volatile debate altogether, essentially tilting the balance towards the controversial Aadhaar as possibly the only identity document centrally linked so as to constitute a valid proof of identity in near future, the matter of orange passports for those in the ECR category is in a league of its own.

Not only does this show an unhealthy taxonomic urge on the part of the state to classify and reclassify its citizens into boxes that are purely discriminatory, without any added benefits to the future orange passport holder, it's equally about exposing India's poor migrant workers, looking for seasonal employment in the Gulf and accepting terms and conditions that are often below par, to an even more cut-throat and abusive international labour circuit.

Changes from the MEA

While the MEA has decided that the last page of the passport and other travel documents issued under the Passports Act, 1967 and Passport Rules, 1980, would no longer be printed, that the so-called changes that have been approved show the inability of the government to understand how the new rules would impact the most vulnerable among international emigrants - migrant labourers travelling to countries looking for dirt-cheap labour.

While the existing passports would expire only when mentioned in the respective documents, once the new passport booklets are designed, manufactured and made available by the Indian Security Press (ISP) based in Nasik, there will be two different passports for the non-diplomatic, non-governmental citizens from India. While no time has been specified as to when the orange passports would be made available by the government, it's important to highlight the regime of discrimination it would usher in, practically mid-wifed by the government of India.

In India, there exists an official, white passport for those travelling abroad for government work, a maroon passport for those engaged in diplomatic functions, as emissaries of the government of India, and the regular, navy-blue passport for the ordinary citizen, not engaged in any official activity of the Indian government. The colour distinction between the government and non-government jobs as reflected in passports is a universal phenomenon. For example, in the United States, the three kinds of passports that exist are once again official, diplomatic and regular. In the United Kingdom, however, with its history of colonialism and various territories still in some phase or another of colonial relations, there are different passports for those living in British Overseas Territories such as Gibraltar, etc.

However, in no country there exists discrimination between citizens on the basis of their educational qualifications and economic background, so much so as to issue them passports of different colours. Citizens engaged in non-governmental, non-diplomatic activities are not sorted on the basis of their class and degrees, since the visas issued to professionals from developing countries anyway reflect the biases of the global labour circuit.

The only thing connecting a highly-qualified professional belonging to the top tiers of the jet-setting transnational class to a poor migrant worker in the United Arab Emirates, Qatar, Sudan, Kuwait, Saudi Arabia and other countries of West Asia is the navy-blue passport, showing them all as equal citizens of the Republic of India. Segregated anyway by way of their differing modes of travel, accommodation, salaries/wages earned or profits garnered, fluency in English and other languages of the global capital, the white-collar Indian worker abroad, euphemistically called the Non-Resident Indian, is as removed from the blue-collar migrant worker as s/he is while living in India.

Hence, giving this informal economic and sociocultural segregation an official stamp is tantamount to institutionalising the bias, from the very top. Does the MEA, in the name of ease of emigration checks, want to create a two-tiered passport system, one reeking of privilege, other not? What next? Tiered voting rights? The ECR category is meant for those who need to seek permission - emigration clearance - from the office of Protector of Emigrants (POE) for travelling for employment purposes to the 18 listed countries. This in itself is slightly discriminatory, but is essential to keep a tab on Indians born into poverty looking for a wee bit of opportunity to settle abroad, and often ending up as illegal immigrants in countries importing millions of job-seekers as blue-collar workers.

The ECR category is the fallout of a global labour regime that's heavily tilted against poorer or developing countries with a huge population, such as India, and is a signboard of unequal relations of our neocolonial times. Tales of abuse that the migrant workers live to tell are not only harrowing, but point towards an inherently exploitative system in which the riches of resource-heavy but sparsely populated countries, such as in West Asia, are often built with the sweat and blood of the "modern day slaves". For example, an RTI has revealed that in Qatar alone, 2,500 deaths of migrant Indian workers have occurred since 2007, because of inhospitable work environment.

Since South Asians form a bulk of those working in the Gulf, rights organisations such as Human Rights Watch, Amnesty International, among others, have red-flagged the issue, and asked for independent probes into these systemic abuses. Even though there are federal laws to prevent abuse of migrant workers, there's way too much laxity in their enforcement, making poor Indian migrants particularly susceptible to rank exploitation.

What happens when the poor economic and educational background of millions of Indians becomes an official class of its own, manifest in as tangible a manner as the issuance of a passport in a new colour - orange? This distillates the discrimination - so far practised abroad - into a new kind of official hierarchy, leading to further apartheid of opportunities. The orange passport holder would have to face scorn not only abroad, but also in his/her own country.

It would put an official tag to an already adverse situation of economic and sociopolitical hardship, collecting them all in a document that would scream "second-class citizen". Since the passport is in most cases a proof of identity not only in India but also abroad, this second rank ID proof is liable to set off a chain of discrimination in handling, maintenance, consular access, among other official matters.

Moreover, because the orange/ECR-passport wouldn't come attached with any positive discrimination or benefits, this classification has Big State written all over it that treats its citizens as either units of usable data or revenues.

That's the irony. The migrant workers in the 18 ECR countries send back home the bulk of the remittances, in billions of petrodollars. In states like Kerala that forms a substantial amount of revenue collected changing the face of the region, helping add to the government-driven projects of complete literacy, secondary and higher education, eradicating malnutrition, healthcare at par with international standards, etc.

Why would then those with a significant contribution towards helping their native states back in India have to be fettered with a document screaming bias from the rooftop?

It is also ironical that the Union minister of external affairs, Sushma Swaraj, who has distinguished herself as an innovative foreign minister despite her limited role in shaping India's foreign policy, responding with alacrity on Twitter to the pleas of Indians stuck in difficult situations abroad, often those without any connection in the government, has agreed to a policy dripping with regimented bias such as this.

Would she now ask if a requester is a holder of an orange or a blue passport before jumping to his/her help? She'd have to, as a matter of fact. And that'd be a big shame.

Also read: When it comes to homosexuality in India, liberal media is like Hindutva brigade

Post your comment
#RTI, #Diplomatic passport, #Remittances, #Passports
The views and opinions expressed in this article are those of the authors and do not necessarily reflect the official policy or position of DailyO.in or the India Today Group. The writers are solely responsible for any claims arising out of the contents of this article.