10 films show why India has been a loser at Oscars

As all of India (or at least those with Twitter accounts) got out of bed early on a Monday to cheer American films (many nearly unwatched in India) to Oscar glory, our own tryst with similar glory has largely been fraught with disappointments - unless you count Slumdog Millionaire as an Indian film and Anil Kapoor's cheering as an acceptable Indian representation!

The norm is that the Film Federation of India appoints a separate committee to select and send films to the Academy Awards - presumably ones which they consider to be most worthy and/or capable of winning a nomination at least, if not the award.

Neither the information and broadcast ministry not the National Film Awards jury is not involved in this selection - though nothing seems to suggest that they would have done a better job than the FFI committee. And there is a clear divergence among the choices. Except for rare occasions, the winners of the Best Film at the National Film Awards have - by and large - not got sent to the Oscars.

So going back in jumps of ten years from the present year, here is a selection of India's entries at the Oscars. They pretty much cover the whole gamut of reasons why - forget the statuette - India has not even got nominated (in the top five).

A wry satire on India's electoral democracy made some small waves in the festival circuit and was discussed in India for some great acting performances. Compared to the other choices available to the committee, Newton was a good selection in terms of cinematic quality. But it was severely hamstrung by the lack of a publicity budget for Hollywood. Observers estimate films spending anything between $3-10 million to lobby for and promote their nominations among the Academy members. Newton was made on a budget of $1 million. Sigh.

On paper, Vidhu Vinod Chopra's Ekalavya had a lot going for it. The director - Chopra - had been nominated (in 1978) for an Oscar in the Best Documentary Short Subject category. The film had garnered some praise in USA, including LA Times who called "a lost film by David Lean". But no go!

The only reason to break the ten-year back-jump is India's last nominee in the form of a grand historical saga, punched with an underdog story that involved a game completely unknown in USA.

Lagaan was buoyed by producer Aamir Khan's steely intent in making his film a winner. He invested serious money in promoting the film among the Academy members, turning it into a nomination. The anti-climactic second in which a Bosnian film bagged the statuette while Aamir Khan and director Ashutosh Gowariker stood clapping remains a moment of heartbreak for Indian cinema.

One of the greatest mysteries of Indian cinema is the question of how Shankar's Jeans reached Los Angeles - barring the connection that the film was set in Los Angeles. Whether its status as the "most expensive Indian film" till then had any impact on the committee is unknown but even in those pre-social media days, the amount of ridicule Jeans received for being sent to the Oscars was something quite unprecedented.

Mani Ratnam's classic gangster epic had Kamal Hassan in a role that is still reverentially referred to as an acting tour-de-force. The film itself has often been said to be in the "Godfather style" though the similarities are not much. That Nayakan didn't get nominated could be because the songs and dances - so intrinsic to Indian cinema and beautifully picturized by Ratnam - were felt to extraneous by the American audience. As a sort of consolation, the film was included in Time magazine's All-Time Best 100 Films.

Satyajit Ray was an international film festival favourite - winning major awards at Cannes, Berlin, Venice etc - but missed out on Oscars (till, of course, the Academy gave him an award for lifetime achievement). Shatranj was the last of his films to be sent though - like the previous two - it didn't make it to the final nomination. Ray's deep, ponderous explorations of the human condition were probably too heavy for the Academy. And of course, India had lived up to its whimsical reputation earlier by not sending one of his best works, Charulata (in 1964).

You could say the Oscars were not as big in India in the 1970s as it is today. Probably that's why nothing about Manthan's Oscar foray is available to us.

An idealistic government officer's attempts to start a milk cooperative in a village checked all the boxes of hope, exoticism and poverty. Chances are that it probably got crowded out by the Italian and French films, industries that ruled the roost in the 1970s.

Aakhri Khat (1967): A Rajesh Khanna film at the Oscars is a tough one to swallow, but here it was. In deference to the "exalted sensibilities" of an international award, Indian cinema's entries to the Oscars have always been the films that "had a message" or were in the arthouse style.

So the film that took our Kaka to the Oscars was his debut, had him playing a sculptor separated from his estranged infant son and was a "realistic" depiction of urban life through the eyes of the lost baby.

Trivia: Aakhri Khat was directed by Chetan Anand. Earlier, Vijay Anand's Guide was an Indian entry. To complete the symmetry, Dev Anand gave himself an Oscar in his own film, Censor. (Yup, he played a filmmaker whose film was censored in India but ended up winning an Oscar after he smuggled it out to USA.)

Mother India (1957): India hit pay dirt in the very first year it sent a film to the Academy, by getting nominated for Mehboob Khan and Nargis' mega-epic. While it was occasionally ridiculed for its over-the-top poverty - a British reviewer called it "Blood, Flood, Fire and Mud with Mother" - the formula clearly worked with the US audience. 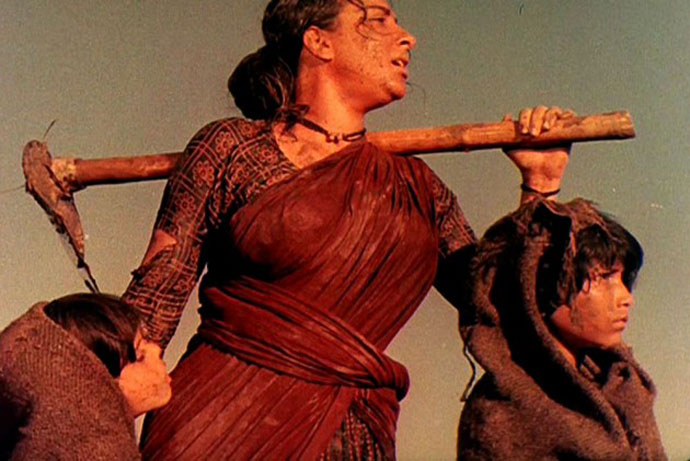 It is rumoured to have lost to the winner by a solitary vote. A vote that could have set Indian cinema on an international trajectory, something that's been elusive even now.

A mix of bad choice, lack of financial clout and plain simple bad luck has kept India out of the Oscar list till now. But with brave new talent burgeoning, international studios expanding, it looks like only a matter of time before Anil Kapoor dances in the aisle for a bonafide Indian filmmaker!