How Pakistan tortures its LGBTQs: With its brutal mix of silence and violence, Pakistan routinely targets this vulnerable group

There's no figure for crimes against transgenders in Pakistan. Because, beyond the flashy Page Three parties of Pakistan, no one cares as the LGBTs get beaten, abducted, tortured and raped.

"You are dancing, wrapped in a towel, inside a washroom and you find it funny? "You didn't find it funny?" "No, I found it vulgar."

The morning show anchor of Samaa TV, one of Pakistan's leading television channels, was screaming at the top of his voice while the guest on the other side, a social media star, was trying hard to make his point.

That was literally a slice of the on-camera exchange on the morning of May 6, 2019, between TV host Muhammad Shueb and social media personality Naseer Jung, who is widely popular among Pakistan's LGBTQ community. As Shueb's co-host, a woman, seemed too shocked and confused to react, Shueb went on with his tirade against Jung — calling him 'cheap', 'vulgar', even 'abnormal'.

As luck would have it, Shueb didn't walk away with any brownie points after the show for insulting Naseer. The result was quite the opposite when the video of the show hit social media.

Nasir Khan Jung soon started trending across online platforms as thousands of users — many from the LGBTQ community — took to social media (both from India and Pakistan) to express their anger on the blatant heckling of Nasir Khan Jung.

The protests reached such a point that two days later, on June 8, Shueb had to issue a public apology from the same morning show. 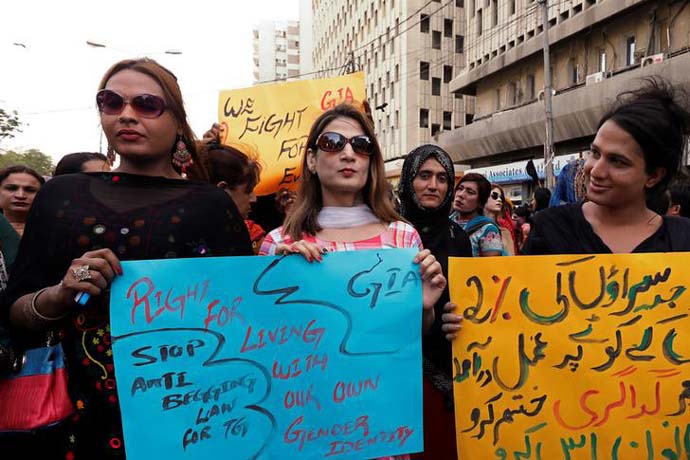 Protests galore: But nothing changes in Pakistan. (Photo: Reuters)

He also called up Nasir Khan Jung on the same show and repeatedly asked for his forgiveness. Nasir, on his part, was most gracious and said that he doesn't have any ill-feeling in his heart about Shueb or the show.

The controversy might have ended there — but this incident serves as a classic display of aggression that Pakistani youth today display towards transgenders in Pakistan, who continue to live in the shadows of deep hate.

Just like any sexual crime against underaged boys is grossly underreported in Pakistan, violent crimes against the LGBTQ community don't even find a proper mention in the police books in Pakistan because a large section of the population still looks at this community as outcasts.

As a result, it is alleged by LGBTQ groups that even though a victim musters up the courage to go to the police, he or she doesn't get any legal remedy because the police — most of the time — aren't inclined to report or investigate violence against the LGBTQ community in Pakistan. The rate of violent crimes against the transgender community is very high — specially in the badlands of Khyber-Pakhtunkhwa which is known as a particularly violent and lawless province of Pakistan.

While speaking at a press conference in June — after the forceful kidnapping and torture of one their prominent members — Farzana Jan, president of Trans Action, said "transgender women are at the mercy of gangs in the northern province of Khyber Pakhtunkhwa" — and the conviction rate of such crimes is, understandably, zero.

Do note, these are just bare numbers from one province of Pakistan.

These numbers don't even say how transgenders are treated in the rest of the country, and how violent the crimes against them are.

Kidnapping, rape, sexual torture, confinement and robbery against the LGBTQ community are routine in Pakistan. Activists allege that police don't want to even act when such crimes are reported to them.

Sometimes, when the crimes get out of hand, like dismemberment of a victim's body or burning somebody to death for resisting a sexual assault, the resultant outrage catches peoples' attention. Those are the times when the members of the community and the activists come out on the streets to protest. Some social media hashtags are shared — the authorities largely remain silent, waiting for the noise to pipe down with time. As the voices of protest get drowned out in the cacophony of other pressing issues, the outrage tempers down — till another violent crime takes place again.

It is widely believed that Pakistan's LGBTQ community is one of the most oppressed in the world but the biggest tragedy is that there is no data about it. The NGOs who advocate LGBTQ rights in Pakistan often don't get any financial support. There is no formal or informal system about gathering data about the violent crimes perpetrated against the transgender community in Pakistan. The exception vs the norm: Marvia Malik, Pakistan’s transgender news anchor, at the Kohenoor News channel in Lahore. (Photo: Reuters)

So, though everybody knows what is happening against the LGBTQ community in Pakistan, this is just passed off as nameless and faceless crimes in Pakistan and the LGBTQ victims get lost in an avalanche of the horrific crimes that happen daily in many unsteady provinces like Khyber-Pakhtunkhwa.

The Pakistan legislature has provided the government enough teeth to deal with the rights of the LGBTQ community.

Pakistani laws have recognised the third gender since 2009 after the Supreme Court recognised this and even granted them the right to inheritance.

The Pakistani Parliament passed the Transgender Persons (Protection of Rights) Act in May 2018, where a citizen has been bestowed the right to self-identify as male, female or a blend of both genders, and to have that identity registered on all official documents, including National Identification Cards, passports, driver's licenses and education certificates.

Many social media stars in Pakistan are activists of the LGBTQ community who are fighting against all odds to make a mark in the fiercely religious conservative society.

Members of the Pakistan LGBTQ community are running for elections, storming the ramp in fashion shows and also anchoring prime-time news.

But all that shattering of the glass ceiling has largely remained in the elite circles of Peshawar, Islamabad, Lahore and Karachi. Beyond the flash parties: The real situation for LGBTQs is Pakistan is very dark. (Photo: Reuters)

Despite being armed with all the necessary regulations and legal teeth, Pakistan is failing its transgender community every single day.

Pakistan has established an unofficial system of not counting the crime just to look the other way when members of the transgender community are attacked or killed.

The fact is that the Pakistani government hasn't recognised the rights or the dangers that the LGBTQ community faces — despite Pakistani courts nudging them various times and despite thousands protesting on the streets.

Pakistan doesn't even deny that they are one of the worst countries for the LGBTQ community.

They just pretend that they don't know about it because such crimes are just not recorded in their police stations.

Also Read: Why silent on Bacha baazi, Pakistan? Instead of sponsoring terrorists, Pakistan should tackle this social evil instead