Let us give peace a chance.

Greetings from New Delhi from a former Indian soldier, who has served on the Line of Control (LoC), conducted counter-insurgency operations against Pakistan-trained terrorists in Kashmir Valley, and participated in several Track-2 discussions aimed at conflict resolution. 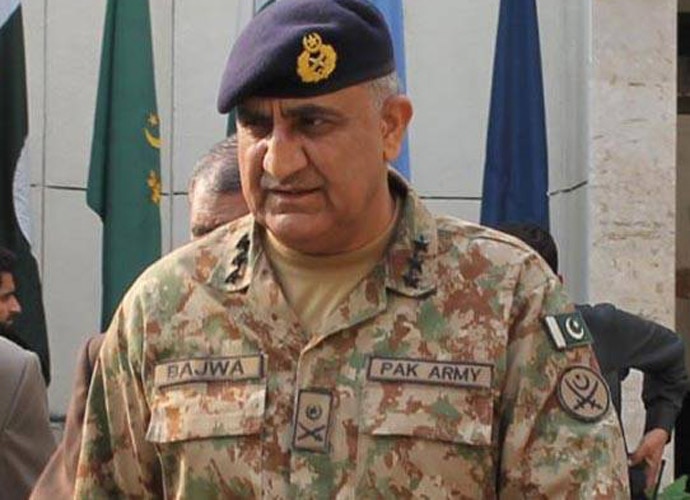 You were reported to have told Pakistan's parliamentarians recently, "The military is ready to back the political leadership's initiative for the normalisation of relations with India." In the same meeting you defended Hafiz Saeed, chief of the Jamaat-ud-Dawa (JuD) and the Lashkar-e-Taiba (LeT) and the mastermind behind the Mumbai terror attacks of November 2008 and extended your support to efforts to "mainstream" him and his cadres. Don't you think the two positions are dichotomous and smack of a business-as-usual approach against India?

For over 70 years, since 1947-48, the Pakistan army has been waging a low-intensity limited war against India at the LoC, ostensibly to complete what it calls the "unfinished agenda of the Partition" - that is, the merger of the Indian state of Jammu and Kashmir (J&K) with Pakistan.

In keeping with its diabolical strategy to "bleed India through a thousand cuts", Pakistan's deep state (army and the ISI) has been nurturing and sponsoring terrorist organisations such as the LeT and the Jaish-e-Muhammad (JeM), to launch terrorist attacks on military and civilian targets in J&K and other parts of India for almost 30 years.

What Pakistan's "miltabishment" euphemistically calls the provision of "political, diplomatic and moral support" to so-called Kashmiri "freedom fighters" is, in effect, a package deal that includes the recruitment, training, arming, equipping, funding and the launching of radical extremists, mainly from Pakistan - to wage what they are brainwashed into believing is a jihad - a holy war against India.

Infantry battalions of the Pakistan army deployed on the LoC aid and abet the induction of the terrorists by providing intelligence about Indian deployments, information about the terrain, guides to escort terrorist groups across the LoC and covering fire during attempts at infiltration. The ISI's "psyops" operatives work overtime to inflame passions in Kashmir through both regular and social media and fund stone pelters.

You designate terrorists as "strategic assets" and play double games. You call terrorists who attack targets in India and Afghanistan "good terrorists" and those who hurt the Pakistan army's interests "bad terrorists".

Well, Uncle Sam, your major non-NATO ally (MNNA) has put you on notice to stop providing bases and safe havens to the likes of the Haqqani network to attack American and Afghan troops.

Despite former prime minister Atal Behari Vajpayee having reaffirmed India's commitment to the existence of Pakistan as a nation-state while visiting Minar-e-Pakistan at Lahore in February 1999, the conventional wisdom in GHQ Rawalpindi is that India poses an existentialist threat to Pakistan.

You strategise that keeping India embroiled in countering cross-border, state-sponsored terrorism is a "low-cost, high payoff" option to weaken and destabilise India. The Chinese, your "all-weather" friends, watch your efforts to destabilise your neighbours from the sidelines and encourage you to run with the hare and hunt with the hounds. Sadly for you, the reality is much different. India is not bleeding; you are going down the tube.

India has shown immense strategic restraint in the face of the gravest provocations (intrusions in Kargil in 1999, attack on the Indian Parliament in 2001 and terrorist attacks at Mumbai in 2008) so that socio-economic growth is not hampered.

Among the world's large economies, the Indian economy's growth rate has consistently been the fastest for over a decade. At less than 1.60 per cent of the projected GDP for 2017-18, India's defence expenditure is among the lowest in the world. Resilient India is a rising power in a polycentric world order.

As for J&K, the security environment is stable. Despite your best efforts, numerous infiltration attempts have been thwarted at the LoC in 2017-18. Though there are sporadic incidents of violence, these are limited mainly to the Kashmir Valley. A handful of Kashmiris have been vocal in expressing their disaffection; they are free to express their views in India's democratic milieu. However, clearly, no one has any affection for Pakistan, except some members of the Hurriyat Conference that represents nobody.

And, what has been the internal fallout of your policy of supporting and giving state patronage to terrorist organisations within Pakistan? All sane Pakistanis readily accept that the army and the ISI have unwittingly created a Frankenstein monster, which is gradually but inexorably spinning out of control.

Pakistan's name has become synonymous with international terrorism. Most major terrorist attacks around the world in this century have had a Pakistani connection. Your country has earned the dubious distinction of being described as the hub, epicentre, even the mother nation sponsoring terrorism.

Your military bases and headquarters have been attacked by radical Islamist terrorists. These include the Mehran naval base near Karachi, the airbases at Kamra and Badabher near Peshawar, the GHQ at Rawalpindi and the ISI's regional HQ at Lahore. In an attack on an army school at Peshawar, the terrorists killed over 150 children, most of them from army families.

The Baloch people are fighting for their independence - they want freedom from the military jackboot riding roughshod over their human rights and their dreams. The long-suffering Pashtuns recently organised a protest march to Islamabad. The Shia-Sunni sectarian divide appears unbridgeable and creeping Talibanisation is gnawing at Pakistan's innards. In November 2017, a handful of radical extremists held Islamabad hostage and you prevailed on the government to cave in to their outrageous demands.

Pakistan's defence expenditure is a major drain on the economy, which is in the doldrums. With work on the $62 billion China-Pakistan Economic Corridor (CPEC) now in full swing, the country is heading for an inevitable debt trap. Your press is full of anti-CPEC rumblings. And, the Chinese are worried about the security of their workers.

The international community is apprehensive of the possibility of your nuclear warheads falling into jihadi hands through subversion. Given the extent of radicalisation of the Pakistan army since General Zia ul Haq was the army chief, even more worrisome is the possibility of a jihadi-led coup from within the army.

In the low probability, but high impact eventuality that the jihadis manage to seize control over Pakistan's nuclear arsenal, the consequences are likely to be horrendous - both for the region and the international community. Pakistan is gradually heading towards complete diplomatic isolation.

If you carry out a net assessment of the colossal resources committed by the deep state to bleed India and the gains achieved vis-à-vis the losses sustained, you can come to only one conclusion: Hostility with India over 70 years has yielded no tangible dividends. Your DGMO will tell you that the Pakistan army cannot take Kashmir from India by military force. Maintaining armed forces numbering half a million personnel to ward off phantom threats has been a major drain on Pakistan's budget and has severely hampered socio-economic development. A former corps commander of the Pakistan army told a few of us during a Track 2 meeting that considering how far behind India had left Pakistan in all fields of human endeavour, he felt ashamed at how badly the Pakistan army had let down the country.

Since the trans-LoC surgical strikes of September 2016, India has adopted a posture of tactical assertiveness under the umbrella of strategic restraint. The continuation of hostility through daily pinpricks runs the risk of escalation to large-scale conflict. It might even cause India to change its policy to a still more vigorous approach.

Imagine where Pakistan would be if India began to provide "political, diplomatic and moral support" to the Baloch freedom fighters and the disaffected people of Gilgit-Baltistan exactly in the same manner that the deep state does in Kashmir.

Is there any point in continuing to pursue a fundamentally flawed policy? You must have been taught during the Junior Command course to never reinforce failure. Prudence lies in following a pragmatic approach to conflict resolution.

Since conflict has not paid dividends, is it not time to give peace a chance? If you were to stop supporting radical extremism, put an end to cross-border terrorism and extend the hand of friendship, I am sure India will reciprocate with enthusiasm.

Statesmanship requires leaders to shed the shibboleths of the past and conceptualise a progressive vision for the future. Courage and persistence are necessary on both sides to build a national consensus for peace.

As the head of an army that "guides" Pakistan's foreign policy and national security policy, the onus is on you to review the present strategy that is flawed and opt for peace and stability in the region so that you can fight the demons within in a concerted manner.

In the past, many military leaders have shown themselves capable of acting like statesmen. You have been called a "thinking" general. You can rise to the occasion and prove it, or fall by the wayside as another also ran - like your predecessors. The ball is in your court.

Also read: Tandoor murder case: How Sushil Sharma killed his wife Naina Sahni and disposed off her body in a restaurant

Post your comment
#Islamist terrorists, #Kashmir dispute, #Qamar Javed Bajwa, #Pakistan
The views and opinions expressed in this article are those of the authors and do not necessarily reflect the official policy or position of DailyO.in or the India Today Group. The writers are solely responsible for any claims arising out of the contents of this article.