Panchayat Review: Welcome to sweet and sour but our Bharat

The story lies in its people. In how they help a big-city fish survive in their dry village.

Do fish survive out of water? A fish out of water is the analogy that comes to mind when you see Abhishek Tripathi (Jitendra Kumar), a 20-something graduate who has been fished out of a big city and thrown into a godforsaken village. Some of the fish throw their fins and tails around, before gasping a lonely death on land. Our protagonist Tripathi is the rare merman who manages to survive.

His place of work, Phulera, is a village that is best seen from atop the water reservoir. But Tripathi has a fear of heights. So falling in love with this village is a task we will tackle another day. Phulera is just another village picked out of the 'real India'. This India is an adventure. "Nahi chahiye mujhe adventure. Simple zindagi jeeni hai," says Tripathi. Cut. We arrive in Gram Panchayat Phulera on a bus. Tripathi then rides his bike into the village and we meet our key players here. The Gram Pradhan is Manju Devi (a spectacular Neena Gupta in a frustratingly short role) who is the Pradhan because Sarkar decided that that seat was to be occupied by a woman and her husband propped her up. The 'Pradhan-Pati' is Brij Bhushan Dubey (Raghubir Yadav), her pati - husband, who is the main man. Dubey is an amiable man. He takes his lota to the fields in the morning because it helps keep him in shape. His house has two bathrooms, we are told. But the man needs his exercise. His Man Friday is Up-Pradhan Prahlad Pandey (Faisal Malik), a man whose weight concerns his boss more than it does him.

For Tripathi there is the human equivalent of molten-butter-on-warm-brown-toast Vikas (Chandan Roy). Vikas, who knows the limit of his ambitions but doesn't bat an eyelid while telling his boss to study harder and bell that elusive CAT. But there is the roar of mosquitos, four-hour power cuts and community work to deal with before that.

With these as his adversaries and friends in the trio of his Panchayat men, Tripathi sets out on a journey of self-discovery. And what a journey it is.

The creators of Panchayat, The Viral Fever, prove with their latest series why they are miles ahead of their desi competitors in the OTT game. Many have come and poured millions into this platform, but TVF is a notch above them all. The story of Panchayat is simply told. The simplicity is the biggest strength of this series. It does not have any racy plot to keep you on the edge of the seat. You ask Alexa to play next because you want to know what happens next. Not because the narrative pushes or tricks you into doing it. In Panchayat, the creators ensure that you are given enough to relish and ruminate on in every episode. It's got eight episodes. Make the most of them.

Panchayat is not poverty porn. There is poverty, but it is thrown in as a matter of fact. Rather, on the contrary, director Deepak Kumar Mishra and writer Chandan Kumar turn this 'villages=poor' narrative on its head several times through the series: Pradhan-pati ji ke paas bahut paise hai. Khet hai, bhains hai. He doesn't need money from a secretary who is at a 20,000-per month salary. But Pradhan-Pati ji reports to wife Manju Devi, who goads him into getting the money. Hamara Neta Kaisa Ho? He tells his wife, this is how I am. Raghuvir Yadav brings the freshness of the open fields to the Indian OTT scene. He is unlike the Kaaleen Bhaiyas and Brijesh Bhans. Yadav is a good man, a good man who nearly wets his pants when the woman District Magistrate throws him out of the village Republic-Day ceremony.

Jitendra Kumar, fresh off his Shubh Mangal Zyada Saavdhan success, brings out the frustration of Abhishek Tripathi with crisp clarity. "Yeh AbhiSek kya hai? AbhiSHek naam hai mera," he spits at Vikas in the first 10 minutes of us meeting him. The tone is set. 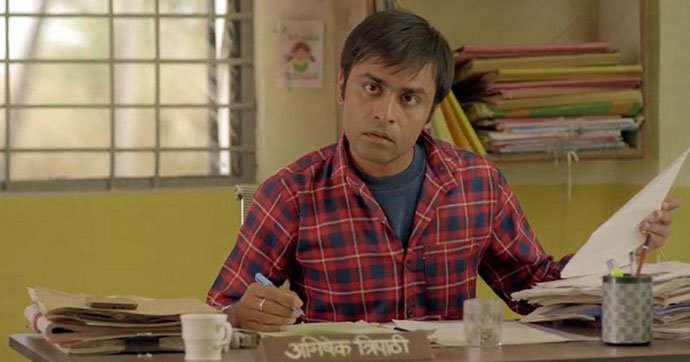 Jitendra Kumar brings out the frustration of Abhishek Tripathi with crisp clarity.

He is irritated by his life, by being dealt a raw deal by Fate, at having to make peace with a Rs 20,000-per month salary even as his best friend back in the city earns a lakh a month, Rs 80,000 in hand. He sees life wringing him dry every day in this back-of-beyond village where people let superstitions and situations get the better of them. They toil hard to make ends meet and feed their kids but will take offence at a strongly-worded slogan aimed at population control. Gram Panchayat Phulera is meethi kheer and bawasir rolled into one joint that Abhishek Tripathi takes the drag from. Friday nights here are spent dealing with hashtag assaults from the faraway big city where his friends celebrate their Friyays. He gets two bottles of beer to drown his situation in. The next morning, he wakes up to see the computer-monitor stolen.

In this village, thieves return the monitor and attach a note along: Humein laga TV hai. It is in moments like these that Panchayat brings the beauty of rural India to its viewers. For a man, an extra petha at the Panchayat meeting is happiness. For the village, it is the pull of kachori-jalebi that pulls them out of their beds on a winter morning to stand through the Republic-Day ceremony. Happiness here is measured by a ringtone that announces 'Rinkiya Ke Papa' every time Dubey, whose daughter's name is Rinky, answers a call. It is not in the open fields and dark nights. Happiness here is in the people.

In Panchayat, the story lies in its people. In how they help a big-city fish survive in their dry village.

#Ott, #Amazon prime, #Panchayat, #Panchayatreview
The views and opinions expressed in this article are those of the authors and do not necessarily reflect the official policy or position of DailyO.in or the India Today Group. The writers are solely responsible for any claims arising out of the contents of this article.