5 people who are in a relationship with a doll

In this digitised world, striking human and real-time relationships is becoming increasingly difficult. These people thought it was better to form a romantic relationship with inanimate dolls.

Have you watched Black Mirror? In Season 2, Episode 1, Be Right Back, Martha loses her love Ash to an accident. At the funeral service, a woman who suffered a similar fate suggests a service to help get over the grief. The service? Artificial intelligence software that mimics the lost loved one and the more information about the dead person you give, the better it gets. An upgrade will bring customers a life-sized doll, that looks just like the dead person and can talk and walk.

And so the dead person is brought back in the form of a robotic doll, like how some people would have their pets preserved as a taxidermy doll.

But if you think the stories of Black Mirror are mere dystopian science fiction, take a look around you. We are already living in the world of Black Mirror, and even that of Martha and Ash to an extent. We are talking about the people who have either fallen in love with Dolls (yes, with a capital D), or are in a relationship with Dolls and even robots.

In the online world, where you can be whoever you want to be, even a sword-swinging samurai or a celebrity on Roblox, having an anime boyfriend or girlfriend for real isn't too unimaginable.

Here are 5 people who are in a real relationship with a doll:

Akihiko Kondo, a 38-year-old man from Japan married his favourite anime character, Miku, in 2018. Kondo says he met Miku in 2008 when he was bullied at a workplace. For Kondo, Miku brought him out of deep depression. Also, he was like many other people, rejected by a series of crushes, making him swear off relationships with real human women.

Kondo says Miku doesn’t cheat on him, age or get sick. When Gatebox, an AI company, launched lamp-sized hologram of virtual characters, it was a turning point for Kondo.

Yuri Tolochko, a Kazakh bodybuilder, has had three doll wives. He married his first doll wife, ‘Margo’ in 2020, after ‘meeting’ the doll at a bar where she was a ‘hostess’. Then he took in two other doll wives - Luna and Lola - after Margo broke down. In fact, in Kazakhstan, it is legal to marry an inanimate object as the law barring marriages does not essentially mention anything about an object.

Tolochko like Kondo says that he prefers his doll wife over a human one as the doll doesn’t complain. Tolochko lives a pretty normal life with Margo (it is as normal as marrying a doll gets), like going on couple spa dates, dinners, etc.

Xie Tianrong, a man from Hong Kong, got engaged to a sex doll named ‘Mochi’ in 2021. He was surrounded by his friends and family at the reception. Tianrong bought the doll in 2019 for a little around $1,200 or around Rs 97,000. He says he first became attracted to dolls in 2011 when he spotted one at a retail store.

Tianrong had real human girlfriends before, but he says that his ex-girlfriend would always stare at her phone. However, Mochi always gives him all her attention. He says it is easier to date a doll than a real human.

In 2017, a Chinese engineer, Zheng Jiajia, married a robot he had built after failing to find a suitable bride. His family was nagging at the time for marriage, and after finding no human woman to marry, he proposed to the robot he had built after two months of ‘dating’. His family and friends also attended the wedding, though the union is not officially recognised by the government.

It seems fiction writers captured these weird desires of people way ahead. In Rana Dasgupta's book Tokyo Cancelled, Chapter 8 talks about a Japanese man who builds and falls in love with a robot after being frustrated with his work and family.

As I couldn't decide which recent photo of us to use for my updated pinned tweet, I chose both :-)#NotASexToy #NotASexDoll #SynthetikLoveLastsForever pic.twitter.com/gV5WUWftjg

Davecat, a man from Detroit, US, is ‘married’ to a sex doll named Sidore Kuroneko and also has a mistress in form of another doll, named ‘Elena’ or ‘Lenka’. Davecat believes in synthetic love and even considers himself an activist for synthetic love and the rights of these dolls. He also has backstories for both of the dolls and how he met them.

He apparently met Sidore at a goth club in 2000, though the reality is that he saved up for a year and a half to be able to buy the $6,000 sex doll online. Davecat's dolls also have their own Twitter handles. 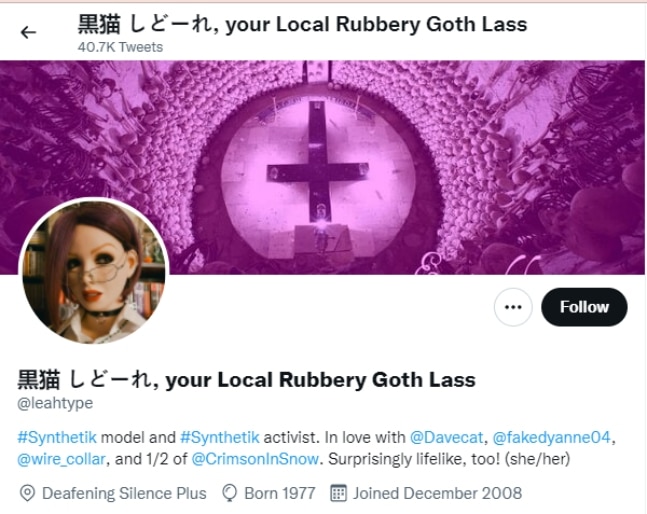 The Twitter handle of one of the dolls. Photo: @leahtype/Twitter

It’s not just men who have forged relationships with dolls. Kina Horikawa, a 23-year-old woman from Japan says her husband is a fictional character, who also joins her family for dinner occasionally. Horikawa is in fact the last name of the fictional husband that Kina has adopted.

In a world where a woman says she’s married to the Berlin wall and one woman says she’s married to the Eiffel tower, loving dolls is not quite strange. The craze about sex dolls was such that in 2018, Finland opened a sex doll brothel. The doll culture is also a subculture, which includes things like 'fictosexuals' - a term that Akihiko Kondo uses to describe sexual attraction, particularly towards fictional characters.

Sexual attraction to a doll also has a name. It’s called Agalmatophilia, which is when a person is attracted to inanimate objects from dolls to walls.

And if you have watched the movies Her and Lars and the Real Girl you will perhaps understand the psyche of the people who take to loving inanimate objects. The one common thing, especially among men who fall in love in dolls, is that they all want their 'partners' to be passive and without their own mind. In other terms, it is the product of toxic masculinity. 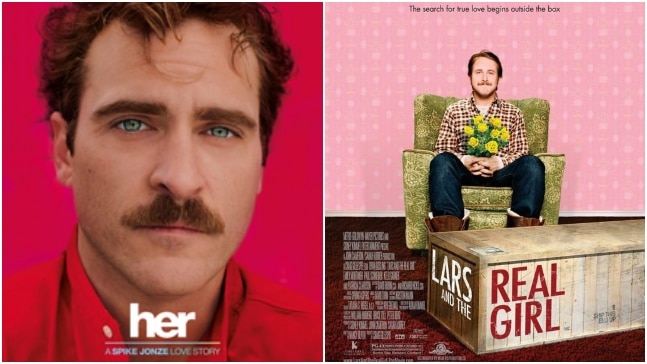 Poster of movies 'Her' (left) and 'Lars and the real girl' (right).

The sex doll industry and the anime world are more than willing to cater to the crazy fan culture. However, the length of such relationships can also be determined by the companies. As in the case of Kondo, he lost his hologram version of his wife when the company stopped its services.

The video below is an ad by Gatebox catering to lonely office goers.

As Black Mirror depicts, there is always an end to what AI can do. Ash's robotic version can only be so much of Ash as much information is available about the person on social media and the Internet. The robot would never know what Ash was like in his life spent away from the Internet.

"There's no history to you. You are just a performance of stuff that he (Ash) performed without thinking and it's not enough," Martha says one day, frustrated with the robotic Ash.

The robotic dolls that can talk, also have limitations to their responses. You will understand if you've ever tried giving commands to Apple's Siri or Google Assistant. Also like Black Mirror shows, these robots are only meant as tools, like a mobile phone; they will never be actual people with their own brains, something that might evoke natural curiosity. And in many ways, it also begs the answer to the question, "Do robots have rights?"

We have heard of cases where people's virtual avatars were molested or raped in the Metaverse by other characters. There was also a case of a sex doll named Samantha who was brutally 'gang raped' and parts of her body were broken. These incidents are nothing but the manifestation of crime on replicas of the real world. So where does one draw the line?

#Syntheticlove, #Siliconedolls, #Sexdolls
The views and opinions expressed in this article are those of the authors and do not necessarily reflect the official policy or position of DailyO.in or the India Today Group. The writers are solely responsible for any claims arising out of the contents of this article.