Smartphones to get periods emoji: Why making menstruation visible is important

If you feel the emoji is ‘icky’, you are exactly the reason why we need it.

Come March and our smartphones will get a new emoji — the periods emoji. The emoticon is shaped like a drop — big, fat and thankfully, red, unlike the clear blue stream our advertisements for sanitary napkins have been showing so far.

If you find the emoji icky, yucky or gimmicky, you are part of the reason why it was needed.

Menstruation is the world’s worst, but most zealously kept secret. A perfectly natural, physiological process has had a huge shroud of shame and secrecy attached to it, and this shame and secrecy have had consequences.

This shame+stigma combination has meant that all that young girls get to hear about periods is the accumulated — often inaccurate — wisdom of the women in their family: wisdom which is mixed with a lot of superstition, shushed questions, hushed answers.

This combination means that young boys hear nothing at all about periods — except crude jokes.

But what all adolescents do learn is that periods are something to be ashamed of — to be hidden away, to be grossed out by.

Girls leave school because of this shame. Women carry the shame to colleges and offices, when getting your periods while not carrying a pad is a crisis. A lot of adult women don’t know about the hygienic, healthy practices they need to observe during menstruation. 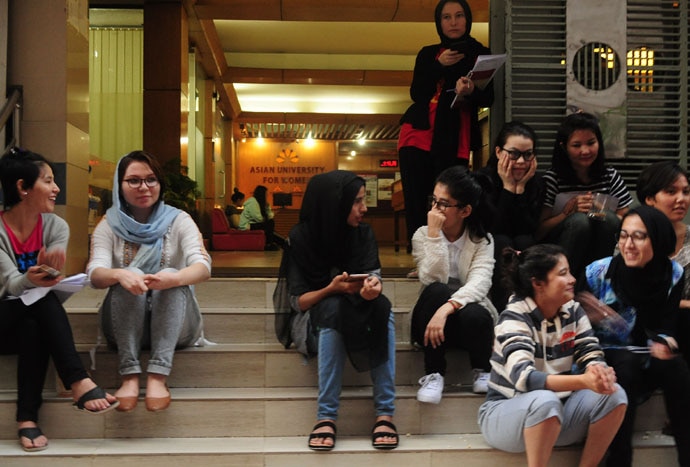 'Down', 'chumming', 'monthlies': Do men even know the number of euphemisms women have to talk about periods? (Photo for representation/Reuters)

How will an emoji help with all this, you ask?

And the first step towards that is to make it more visible.

The emoji has been introduced after campaigning by Plan International UK, a children’s rights not-for-profit. Lucy Russell, head of organisation, said: “For years we’ve obsessively silenced and euphemised periods. As experts in girls’ rights, we know that this has a negative impact on girls; girls feel embarrassed to talk about their periods, they’re missing out, and they can suffer health implications as a consequence… An emoji isn’t going to solve this, but it can help change the conversation.”

Periods are not 'dirty' — they are nothing to be ashamed of.

Women shouldn’t have to plan holidays, temple visits, their own weddings, around their menstrual calendar. Women in offices should not have to bear in silent secrecy the tremendous pain and mood swings that come with periods.

A young girl should not have to feel mortified because her dress is stained.

And all of this cannot happen till the only representation of menstruation in the public domain are those god-awful ‘cute’ umbrellas and flowers in sanitary napkins’ advertisements and packages, which reinforce the idea that period blood is icky and embarrassing.

That's a pad on the left. Then tampons. Then menstrual cups. Looking at them is perfectly safe and healthy, just as using them. (Photos: Reuters)

There are grown men in India who have never in their lives seen a tampon or a sanitary napkin. Even with the best of intentions, these men will not be able to help a colleague in menstrual distress, because they will simply be too embarrassed. And ignorant.

Menstruation has been treated far too long as something mysterious and vaguely sinister — pickles rot and temples are defiled when menstruating women come near them, apparently.

It is high time we popularise, even make banal periods — a smartphone emoji is one small, but significant drop in that direction.