A new potato-shaped planet has been discovered. How is that shape possible?

WASP-103 b, a new potato-shaped planet has been discovered almost 1,500 light years away from Earth. How can a planet be potato-shaped though?

Scientists have just confirmed the existence of a potato-shaped planet! Named WASP-103 b, the planet is located around an F-type star, which makes it 1,500 light years away from Earth. The F-type star is larger and more massive than the Sun and the planet is about one-and-a-half times bigger than the size of Jupiter... that's the largest planet in our Solar System.

WHY IS THE PLANET POTATO-SHAPED? The planet's unique shape was confirmed by a team of astronomers who published their findings on January 11 in Astronomy & Astrophysics. WASP-103 b's particular shape can be credited to the fact that it's very near to its home star, WASP-103 (less than 20,000 miles). The proximity has caused tidal stresses, which in turn have caused WASP-103 b to be potato shaped, instead of a sphere.

Originally discovered in 2014, the planet's shape was not confirmed back then. The team was able to finally confirm the planet's potato shape using the European Space Agency’s CHEOPS mission and data from NASA’s Hubble and Spitzer space telescopes. 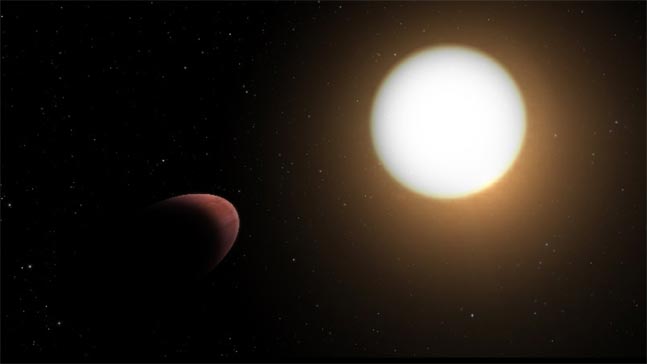 Jacques Laskar, a Paris Observatory at Université Paris Sciences et Lettres astronomer and co-author of the research said in a press statement, "This is the first time such analysis has been made, and we can hope that observing over a longer time interval will strengthen this observation and lead to better knowledge of the planet's internal structure."

WHAT NEXT: Planets tend to take years to revolve around their sun, but some exoplanets, known as hot Jupiters, orbit their home stars in a matter of days or hours. By studying WASP-103b, astronomers were able to conclude that the estimated Love number of WASP-103 b is similar to Jupiter’s. This will allow them to constrain the internal structure and composition of WASP-103b, ultimately providing clues on the inflation of hot Jupiters.

WASP-103 b is able to revolve around WASP-103 in 22 hours. Even though this is not the shortest known orbital period - some exoplanets can revolve around their host star in less than 10 hours - WASP- 103 b has been a point of interest since its discovery.

What do you think of this potato-shaped planet?

#Jupiter, #Potato planet, #Potato shaped planet, #Wasp103b
The views and opinions expressed in this article are those of the authors and do not necessarily reflect the official policy or position of DailyO.in or the India Today Group. The writers are solely responsible for any claims arising out of the contents of this article.