The pain that the bus conductor was put through is reflective of everything that is wrong with the criminal justice system.

Ryan International School student Pradyuman Thakur's killing has turned out to be a double tragedy. It spelled the untimely end of a promising, young life. But a second tragedy has emerged in the shocking revelations made by bus conductor Ashok Kumar about how Gurgaon police beat him up, hung him upside down, tortured and even sedated him to make him confess to the murder of the seven-year-old child, whose body was found in his school's washroom on September 8 morning.

The pain that Ashok Kumar says he has been put through is reflective of everything that is wrong with the criminal justice system in the country, which allows a poor man to be falsely implicated and charged for a crime as heinous as murder.

The probe led by the Central Bureau of Investigation (CBI), which revealed that Pradyuman was killed by a school senior, has raised several questions about the shoddy nature of the police probe that deliberately tried to frame an innocent man.

Why Kumar was made to confess

Kumar's sister-in-law told the media that Ashok was told by the police that "the whole nation is distressed due to the case and so he must confess". Her statement indicates that the police, working under pressure to crack the case, is on the lookout for scapegoats and not real culprits.

There is no denying that the media brought the nation's focus to the case for it concerns the safety of our children in schools — this put pressure on the Gurgaon police to hasten the investigation. But should the police bow down to such pressure and present innocents as culprits before the media?

Worryingly, there seems to be a very sinister plot in play that used every power at its disposal to frame Kumar in the case. The bus conductor was told by a "madam in the school" to keep Pradyuman's body in the car, which was used to carry the deceased child to the hospital. That ensured there were bloodstains on Kumar's shirt. He was then told to wash his shirt.

The CBI probe also revealed that the Gurgaon Police planted a knife in the school bus to implicate Kumar.

His sister-in-law told the police: "The police asked Ashok to say he committed the crime and he won't be in trouble because of that... The police told him it's a small case and they will cover it accordingly."

If these claims have even an iota of truth in them we are doomed. If the police can be so brazen about "covering up" a case that remains in the headlines for days, one would shudder to imagine what happens to cases that are not covered by the media. 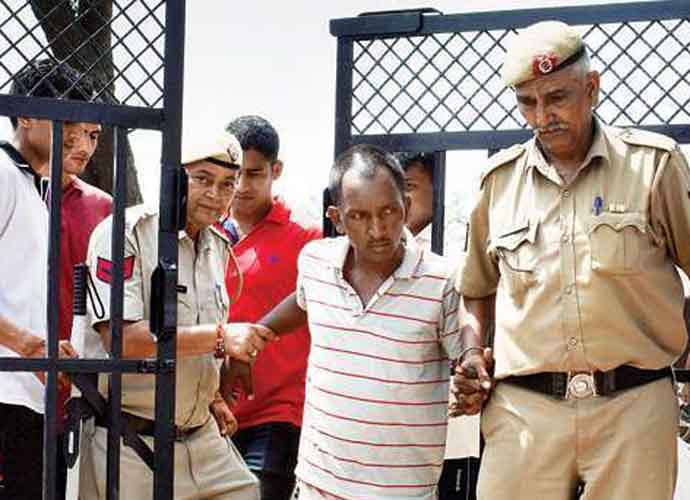 Are the poor easy targets?

Kumar secured his bail on a Rs 50,000 surety, which he could furnish with the help of a neighbour who pledged his car.

The economically marginalised are easy targets because their voices aren't strong enough, not powerful enough to be paid heed to. In cases of petty thefts or merely missing articles in our houses, the needle of suspicion always points to the domestic help. It is easy for us to believe that those who do not have money also do not have the moral courage to resist the temptation to make a quick buck. We don't doubt it, we are sure "they" must have done it. No wonder then that the police found it easy to present Kumar as a killer in front of the society.

Constitutionally, every Indian's life is precious, it has the same value attached to it. Kumar's victimisation is a violation of the principles laid down in the Constitution. It is time chief minister Manohar Lal Khattar answers how the state police had the audacity to frame innocents with complete disregard for the norms of justice.

Not just the killer, also a sexual predator

Murders must have motives. The police had to assign a motive to Kumar's alleged crime and so it told everyone that the bus conductor killed the child during his "attempt to sexually assault" him. The claim looked so flimsy that even Pradyuman's father, Barun Chand Thakur, questioned it.

It is not surprising that Barun was dissuaded from demanding a CBI probe in the case.

That a police department put in place to ensure the safety and security of the people under its jurisdiction chose to tarnish someone's character in this manner is a sad commentary on the prevalent Jungle Raj around us. The police were fearless in that they thought a man who is poor will not be able to stand up to their mighty, unbridled and unquestioned power.

Pradyuman's murder had the top brass of the Gurgaon police monitoring the probe, assuring his parents and the nation from time to time that justice would be done. It therefore begs a question: did this "cover-up" have their tacit approval, if not active involvement?

This appalling travesty of justice cannot be taken lightly for this had the full potential of destroying not just Kumar's life but also the hopes, aspirations and lives of his entire family.

Our democratic principles and our criminal justice system, which promise everyone equal opportunities and treatment cannot be held to ransom by an utterly incompetent bunch of people for whom the lives of the poor, marginalised and voiceless are easy targets.

Also read: Why Rahul Gandhi is not appealing to Muslim voters in Gujarat or talking about riots