How Priyanka Chopra-Nick Jonas are (again) redefining the wedding reception!

Believe us! Virat Kohli is still doing the same whenever he has time!

There’s a reason why the phrase ‘honeymoon period’ has entered our daily conversations. Ask someone how s/he is liking a new job. The answer will be: 'It’s still the honeymoon period.' This period refers to a hunky-dory time which is supposed to be short-lived, like a honeymoon. After that, you start feeling the heat, once you take your rose-tinted glasses off.

But Priyanka Chopra, it seems, is on a mission to rewrite this concept.

She got married to Nick Jonas early December. But guess what? The duo is still attending reception parties. Their own, we mean. 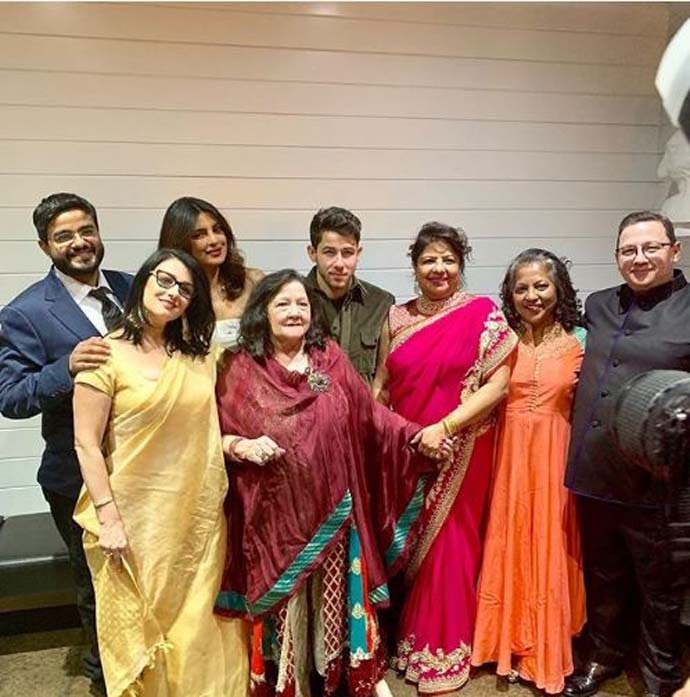 We are not counting. But this is from the latest reception featuring both Priyanka's mother and brother. (Photo: Instagram)

How many wedding parties did the duo throw?

It can actually be a question in Kaun Banega Crorepati. And we don’t know the correct answer. It’s four or five. We guess. Only the members of the two families concerned — and Sabyasachi Mukherjee — can tell the exact figure.

The first one was in Jodhpur, and then either one or two parties in Mumbai, another in Delhi. Then there was a mini-honeymoon break. And they are back — with a reception at ‘sasural’ Belmont, the hometown of Jonas’s father, Kevin Jonas Senior. The Jonas family owns a restaurant there.

Nick and Priyanka just got hitched but that knot that they tied has not been dipped in gravy or honey or hot chicken grease. So it’s time we throw them a Nellie’s Southern feast. Mama and Papa J invite you with pride to come celebrate their boy and his bride.

This was reportedly written at the venue gate. So, Priyanka Chopra teaches us that a wedding is not about a day, a week, or a month. It’s a month-long festivity, depending on how much you can extend it (of course, the budget will be an issue for lesser mortals). Since they were on a mini-honeymoon, there will soon be a bigger honeymoon.

So, the honeymoon period is just a state of mind.

You may not have a video of how your wedding lehenga was made and surely you don’t have Sabyasachi to post nitty-gritties about your wedding costume, but you can surely keep on posting behind-the-scenes photos throughout the year to keep the event/s fresh.

Believe us! Virat Kohli is still doing the same, whenever he has time!

On the work front, while there were speculations whether Priyanka would concentrate on Hindi movies or shift base to the US, she has chosen something absolutely different — she is coming up with her YouTube show If I Could Tell You Just One Thing where she will be seen interviewing celebrities and asking them the one thing that made them what they are today.

This honeymoon period, it seems, won't be over too soon.