With the non-availability of labour, farmers shifted to Direct Seeded Rice (DSR), that saves about 20 per cent of water used for agriculture.

The lockdown triggered by Covid-19 made agricultural labourers in North India flee to their home states – mostly Uttar Pradesh, Bihar, and Orissa. The labour has a major role to play in the transplantation of paddy seedlings – a traditional practice for the crop. With the non-availability of labour, a number of farmers in Punjab have opted for mechanised rice plantation, viz., Direct Seeded Rice (DSR).

The months for rice transplantation are June and July. Unfamiliarity with DSR has made paddy farmers begin to familiarise themselves with agricultural machinery in end-May, so that they are prepared when the transplantation has to be done. DSR is the major shift in paddy cultivation that the Punjab government and the agri-scientists of Punjab Agricultural University have not been able to achieve for decades.

DSR leads to about 20 per cent saving in terms of water. Paddy is the main consumer of groundwater in Punjab. The state uses a mind-boggling 5,300 litres to produce one kilogram of rice, while the all-India average is 3,875 litres. High water usage has been observed because farmers irrigate the paddy fields far more than needed. 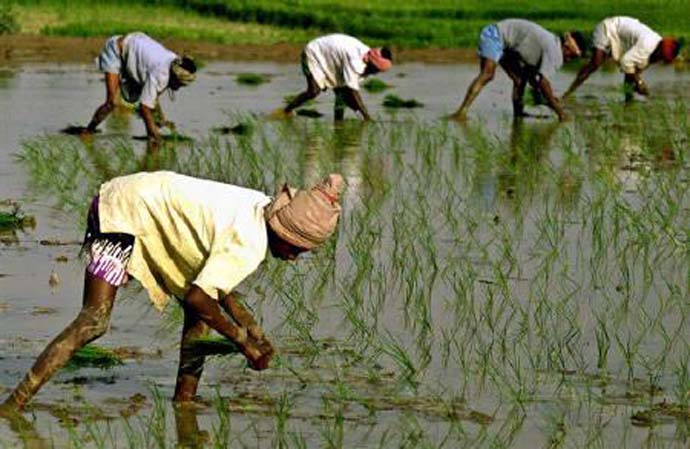 Punjab uses a mind-boggling 5,300 litres to produce one kilogram of rice, while the all-India average is 3,875 litres. (Photo: Reuters)

In November 2019, the Union Ministry of Water Resources estimated that unless remedial measures were taken, acute scarcity of groundwater availability may grip many parts of the country, including Punjab and Haryana, in the near future. In November last year, UP Singh, secretary, Ministry of Water Resources, had stated that several blocks in Haryana and Punjab may absolutely run out of groundwater, not just for irrigation, but even for drinking purposes over the next 15 to 20 years if remedial measures were not taken.

Sadly, though Punjab’s water crisis has been in the making for about 30 years, serious efforts were not made to address it. Steadily over the past few years, several districts of the state were marked as a red zone in terms of water scarcity.  Districts like Barnala, Bathinda, Fatehgarh Sahib, Hoshiarpur, Jalandhar, Moga, Mohali, Pathankot, Patiala, and Sangrur are worst-affected. A major factor for groundwater depletion is the overuse of agriculture tube wells.

Despite such an alarming scenario, all stakeholders, including political parties, had been in denial mode about the gravity of water insecurity. Farmers did not agree to DSR earlier because they were used to manual transplantation through labour. In addition, cultivation through the DSR technique was not favoured as farmers feared an uncontrolled growth of weeds and severe iron deficiency in the crop. The argument of the farmers was that paddy grown through DSR needed intensive care, and spray of weedicide in the early stages to control the growth of weeds.

In order to counter this problem, Punjab Agricultural University has recommended that DSR should not be done or undertaken on light-textured sandy soils. In such soil, the crop may suffer severe iron deficiency and low yields. PAU has recommended that DSR should be undertaken in medium to heavy textured soils, which accounts for 87 per cent cultivable area of Punjab.