The internet has gone into a tizzy with excited netizens waxing eloquent about the now famous and "unprecedented" Rahul Gandhi hug.

While many are congratulating Rahul Gandhi for surprising Prime Minister Narendra Modi with the supposedly impromptu hug, the whole thing could soon take a turn that the Congress may not like. If there's one thing the BJP camp can handle tactfully, it is extracting political advantage from almost any situation. If the BJP sees any situation going in favour of the Congress, the party will spare no effort in trumpeting how Rahul Gandhi's hug actually means that he had surrendered before, and acknowledged finally, the 'PM's greatness and invincibility'.

So the narrative would turn to how great Modi is has been 'finally settled'. It's just a question of time before this narrative takes centre stage.

Second, even if Rahul Gandhi can be said to have 'won a jackpot' with the hug, he lost all advantage within the next minute, when he winked at party leaders in the House in an apparently harmless sporty acknowledgement of a compliment for his 'achievement'.

It is now on record that he has been chastened by even Lok Sabha Speaker Sumitra Mahajan for not maintaining the decorum of the House.

It is quite unlikely that the BJP will let go of the opportunity to use this whole thing against the Congress and claim victory in this political see-saw.

The Congress and Rahul Gandhi could be in for a shock when they realise that the people haven't taken kindly to the 'hug act' of the party president.

Twitter is already seeing people talk about how Congress needs to stand for something more than just being an anti-BJP party if it is to make a mark in the 2019 polls.

These tweets must obviously have been noticed by the Congress too. 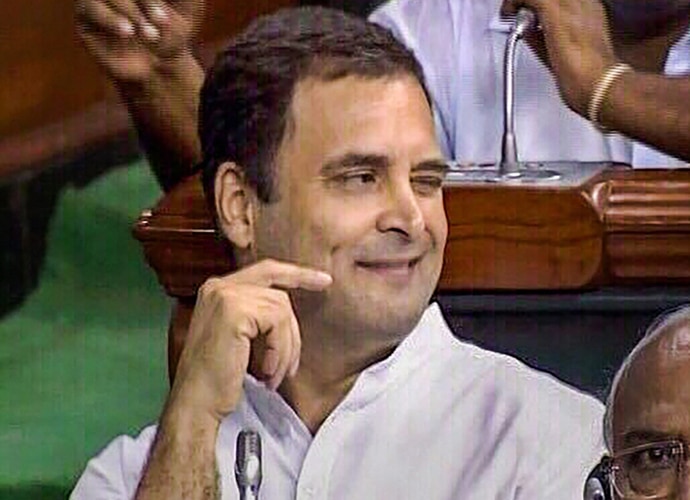 Probably it is this dire need to appear more substantial that led Rahul Gandhi to do something unusual and different right inside Parliament. Whether it worked for him and the Congress is difficult to say until the reaction and response of the BJP becomes clear.

What this writer felt was that Rahul Gandhi may eventually prove to be a very worthy and capable leader sometime in the future but as of now, he is nowhere even close.

Rahul Gandhi appeared to be so consumed with the huge task of spearheading the no-confidence motion in Parliament that by the time he finished his speech, he was all fluttery and overwhelmed with the need to do something to crown the moment with a glorious act, and so he went up to the PM and did what he did.

It lends credence to the premise that it was all unscripted because that wink he (probably) innocently gave on his return to his seat, was a very big mistake. He must be quite aware by now that the cameras don't miss such things, and also that the BJP needed just this kind of thing to question Rahul Gandhi's credibility as a serious power contender.

It is therefore time for the Congress to realise that it is time to present Priyanka Gandhi as the face of the party in the near future.