'Rahul, naam toh suna hoga': Is Rahul Gandhi, the ‘most eligible bachelor of India’, back?

Remember Salman Khan walking right into a crowd of giggly girls, with a guitar strapped across his shoulders and a headset on his head, in Oh O Jaane Jana? Strolling casually, conversing, involving the audience, as it were. And the isthmus-esque stage, with quite literally a sea of fans on either side, allowed that.

When Rahul Gandhi took a stroll on-stage in Chennai's Stella Maris College recently, though obviously not with the intention to break into a song and dance sequence like Salman, the effect and the audience reception was the same.

For starters, Rahul Gandhi had, perhaps for the first time in a long time, ditched his kurta-pyjama and jacket — a uniform of sorts we’ve seen even Sachin Pilot and Jyotiraditya Scindia sport — for a casual pair of denims and a grey T-shirt. Of course, his speech was, in effect, election campaigning, especially with Lok Sabha polls knocking on the door. He knew that. His audience knew that.

But he also knew that his audience was different — unlike the crores who assemble to hear him talk in election rallies decked out with the Congress flag — but equally important.

This statement itself could have unleashed trolls — after all, 'pappu', as he is derogatorily referred to time and again in a political war of words, has often not had an answer, or the answer that was expected of him. He's said the wrong thing several times, gotten trolled, and yet, managed to brush it off like the lint on his grey T-shirt, and continue strolling — both on-stage and in the political arena.

Someone in the audience had a question.

“Sir,” she began, only to be cut off by the Congress President in the middle.

"Can you call me Rahul instead of sir? It makes me comfortable."

The short video clip, now viral on the Internet, captures the expression of the student. She smiled awkwardly, even as the crowd cheered teasingly — yes, we all know what that sounds like.

Last month, a bunch of women Congress members practically mobbed Rahul — yes, we are going to call him that now — on-stage, with one planting a kiss on his cheeks. This was a rally in Gujarat's Valsad district.

Now, it is not for nothing that there are dedicated threads on Quora discussing ‘Why is Rahul Gandhi more popular than Narendra Modi among women in India?’ Or that we have women breaking through his Z security for a selfie.

And in fact, this Rahul wave is not even new. Back in 2014, or through 2012-13, before the Modi wave, as we know it, made the splash that it did across the Indian subcontinent, Rahul was touted to be the 'most eligible bachelor' around — a youth neta the youth could actually identify with.

The wave might have ebbed, but it is not dead. Watch out!

Is Rahul trying to be the Justin Trudeau of India? Perhaps — and why not? If 'youth neta' is the emotion you want to cash in on, if New India is what you want to make, shouldn't we have politicians who can have a conversation with us, rather than just talking at us?

We've had several people telling us what to do, speaking from a position of knowledge that almost inevitably gives them an upper hand — and creates a distance between us and them.

And here's Rahul, who, at the very same college event, said he doesn't even want to be on stage, while everyone else is on the opposite side. He'd much rather exchange seats, or be sitting with everyone, amongst everyone. 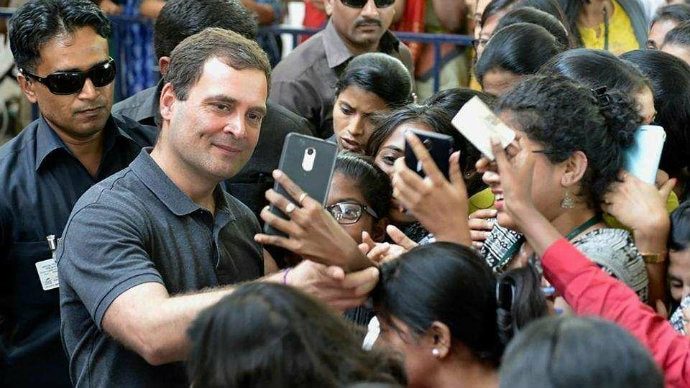 Granted that Rahul doesn't always have answers — heck, he often says exactly what he wasn't supposed to say, and that's okay because that only makes him human — flawed — like all of us.

The obvious counter to this whole episode is that ‘hasee mazaak se election nahin jeete jaate.’ Should we hand the reigns of the country to someone who comes across as fallible? We agree. And now, may we swiftly turn our focus towards another similar session with students, on a video conference, conducted recently by our prime minister. When a student got up to talk about dyslexia and those suffering from this life-altering illness, the response she received was neither something she expected, nor something appropriate, especially from the leader who made that statement.

And we weren't even on a first name basis with him when he cracked that particular joke!

And that's all we are really looking for — someone who can learn from his own mistakes — just like we do, every day.

Also read: Finally, the chor-chowkidar story comes to an end. Here’s how