Loktantrik Janata Dal (LJD) founder Sharad Yadav has a mouth. And he uses it very often to demean women. 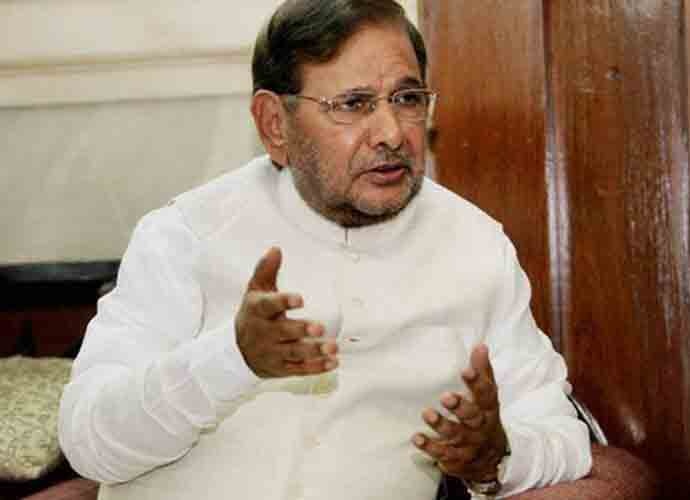 Sharad Yadav has a reputation of talking demeaningly about women. (Source: India Today)

From their complexion, to their 'honour', to now their weight, the apparent misogynist in Yadav finds it difficult to digest the reality that women are as much a part of planet earth as he is, with all his weight which, by no stretch of the imagination, seems to be under control — quite like his comments.

During an election rally in Rajasthan’s Alwar, the Bihar politician asked voters to give chief minister Vasundhara Raje some rest because she is very tired and has put on a lot of weight.

Well, the one thing that people with weight issues do not need is too much rest. They need to be exercising and eating healthy.

Raje, by that logic, should be voted back to power.

If Yadav would’ve known it, he wouldn’t actually be flaunting all that flab himself.

No, we do not have a problem with fat or with fat people or slim people.

It is Yadav who is rooting for slim people, thin women, to be precise.

Even if we are to believe that men’s weight, complexion, age and conduct are above scrutiny — and constitute the grounds on which women need to be judged — Yadav’s health advice wouldn’t cut much ice with experts.

But then, Yadav has never betrayed sensibility as one of his traits. At least, not when the topic for his pontification was women.

In a clarification that Yadav issued after criticism flew his way over his comment, he said his remarks were only meant as a 'joke'.

He even claimed that he had told Raje that she was gaining weight when he met her.

Speaking to ANI, Yadav said: "I said it as a joke. I've old relations with her. It wasn't derogatory in any way. I had no intentions of hurting her. When I met her, I told her then also that you're gaining weight."

Sharad Yadav on his remark 'Vasundhara (Raje) ko aaram do, thak gayi hain, bahut moti ho gayi hain':I said it as a joke.I've old relations with her. It wasn't derogatory in any way. I had no intentions of hurting her.When I met her, I told her then also that you're gaining weight pic.twitter.com/bRzI5XwlmR

At 73, Yadav still doesn’t seem to understand the difference between a personal chat — and a comment made from a public platform addressed to an election rally. A comment particularly concerning a woman.

But then, age is just a number — it doesn’t always naturally add grey matter to ones brain.

While there is no data on who got Yadav’s 'joke' and who didn’t, the one person who doesn’t seem to have seen any humour in the comment is Raje herself.

She, on the contrary, wants the Election Commission of India to take note of the situation and initiate suitable action. Perhaps, Yadav should have added a ‘LOL’ or ‘ROFL’ to his comment to clarify he meant it as a 'joke'.

But then, comedy has forever been a standard defence used by men against claims of impropriety. It occurs again and again whenever women discuss being made uncomfortable by men's commentary or targeted by their harassment.

Every sexist comment that Yadav has so far made has been as a 'joke'.

In 2017, Yadav made a strange connection between the "honour of a vote and a daughter's honour".

Silly question. It's a joke!

Yadav, while participating in a discussion in Parliament in 2015, described the beauty of ‘saanvli (dusky)’ south Indian women.

How does it matter? Wasn't it a joke?! Sharad Yadav must tell us why men's looks are never the subject of his 'jokes'. (Source: PTI)

As long back as 1997, Yadav had made a sexist remark during a debate on the Women's Reservation Bill questioning how ‘par-kati mahilayen’ or women with short hair could represent women from rural areas.

Does Yadav have long hair?

What sort of a man has long hair?

Such a good joke.

Yadav claims a sense of humour. Humour is a subjective matter. What makes one laugh may make the other frown. So, we give Yadav the benefit of doubt.

Not before Yadav explains how it is that almost always, it is a woman’s look and her conduct that are the subject of his 'jokes'?

Why does he deal with his male opponents only on the merits of their work?

We smell a misogynistic bias.

And that is no joke.

Also read: Vasundhara Raje's toughest test: Will she be able to hold on to her crown in Rajasthan?