Why Ramanuja, the philosopher, remains relevant even 1,000 years later

Yet many may have heard of him for the first time during PM Modi's recent Mann Ki Baat.

Many Indians may have heard of Ramanuja, the 11th century Vaishnavite seer, for the first time during Prime Minister Narendra Modi's recent Mann Ki Baat. But those who had may know him as a great philosopher whose 1000th birth anniversary was celebrated on May 1.

WhatsApp forwards and social media posts that day mostly focussed on the special obeisance paid to him in temples across Tamil Nadu and Karnataka. A few articles also analysed his significance, but very few on how his philosophy is relevant in so many ways even today.

His contribution to philosophy — Vishishtadvaita

Sanatana Dharma, as Hinduism should be ideally called, has a distinct religious and philosophic tradition. While Vedas are the source for the former, Upanishads for the latter. The Upanishads, 108 of them, occupy themselves with Brahman, defined in many different ways.

Madhva, Adi Shankara and Ramanuja wrote commentaries on the 18 most important ones, and thereby lies his first claim to fame. He has many other works to his credit. All of them centered around his philosophy of Vishishtadvaita.

Sanatana Dharma and the Upanishads are concerned with the attainment of moksha – freedom from the endless cycles of birth and death. To attain moksha, there are three constituents:

1) The Jiva or the living soul (that includes animals and plants too).

2) The Ishwara or Narayana, who is seen in five different forms — Para: omnipresent/omnipotent, beyond description, Vuyha: Cosmic, Antaryami: Within all living and non-living beings, Archa: as an idol in temples, the omnipresent and omnipotent, and Vibhava: when he takes avataras).

3) The Hita — means and forms of realisation of the Ishwara by the Jiva.

Shankara believed in Nirguna Brahman, where Brahman had no form, no attributes, which meant both (1) and (2) were the same and (3) was realisation. 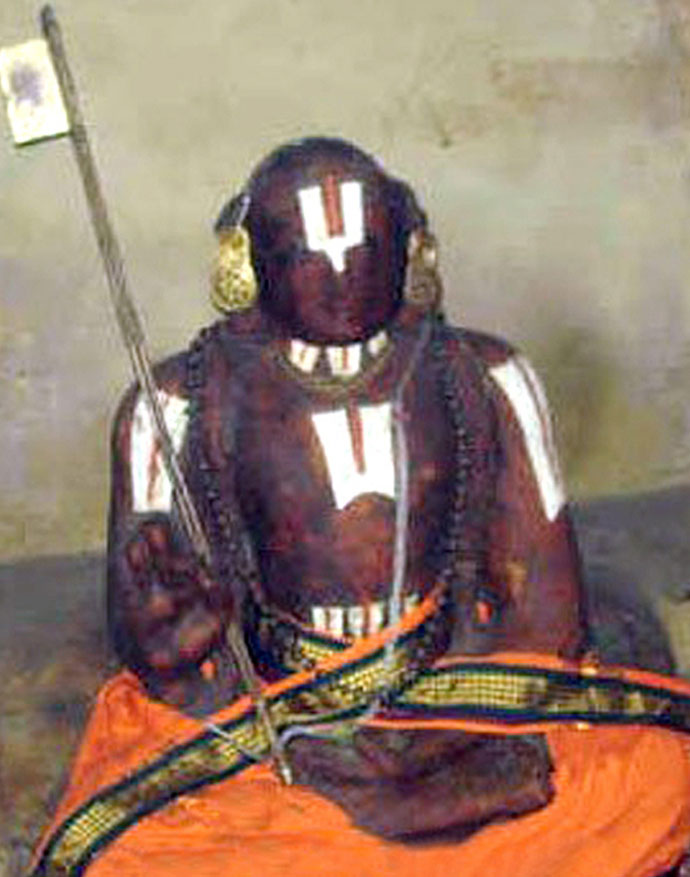 The figure of Ramanuja in Upadesa Mudra inside the Ranganathaswamy Temple, Srirangam. (Credit: Wikimedia Commons)

Ramanuja who came after Shankara argued that (2) and (1) were the same, but still (1) was only a part of (2) and (2) had much more. His argument was, even when we say (2) has no attributes, we give it an attribute and all religious texts across ages when describing (2), mention attributes of some sort (forms of nature/physical attributes etc.).

In a way, what Shankara had made abstract, Ramanuja made it accessible. Shankara’s motive was to create a vision for bringing India together with a vision. Ramanuja’s aim was to bring communities together with a mission.

Sadly, in subsequent debates between Advaita and Vishishtadvaita, we missed the point on how beautifully they reinforce each other — just like an organisation needs a vision and an operationalised, smart, goal-driven mission.

But why should we care about Ramanuja 1000 years after his life? Well, here's why:

Running organisations can be difficult, especially temples since ego struggles take higher levels there. Ramanuja was beyond an efficient administrator in two of India’s most sacred and complex temples – Tirumala and Srirangam.

Systems that he instituted there, are still followed even 1000 years later. In all his administrative reforms, bringing different groups of people together was the main principle. And in this case, clearly, he saw Vishnu as Antaryami. Whether it was the humble flower gatherer or the palanquin bearer, as much as the rights they had in the pecking order of the temple protocol, they had duties as well. The system, therefore, was inclusive across castes and subject to a delicate checks-and-balances system with the temples having a COO in the form of a Jeeyar, who worked through a representative committee.

Bringing Tamil and Sanskrit together into the temple

Long before Dravidian parties saw themselves as the torch-bearers in promoting Tamil, Ramanuja had "beaten them in their game", by making it about us rather than language vs another.

In his time, only the verses of Nammazhwar were being recited. Ramanuja also made possible all the other verses of the 11 other Azhwars to be recited. In order to propagate them, he had them recited rather than sung which has contributed to their greater currency in temples and rituals compared to the Tamil Shaivaite hymns.

He had their images enshrined, promoted philosophic discourses on their verses and quoted them as well. The verses of Andal were a favourite. In one, where she vows to offer 100 portions of butter and a sweet Akkaradisal to the Tirumaliruncholai temple, Ramanuja had that fulfilled as a ritual, which is still being performed.

In another case, he prostrated in front of a little girl because he saw an aspect of Andal in her.

His most evocative verses are in the Saranagati Gadyam where he beseeches Lakshmi to intercede on behalf of the Jiva to the Ishwara for moksha. For he says, forgiveness, tolerance and persistent patience come more easily to women than to men.

Yet today, as the hymns are recited, the reformer has been deified, when we put Ramanuja in a pedestal, worship him with his verses and garlands and celebrate his 1,000th birth anniversary, our minds do a quick check mark.

Had we practiced inclusiveness coupled with operational excellence the way he did, it would have been be difficult indeed, but he would not have lived in vain.

Also read: Bhakti can show you how to love and reach god

#Sanatana Dharma, #Vaishnavism, #Vishishtadvaita, #Ramanuja
The views and opinions expressed in this article are those of the authors and do not necessarily reflect the official policy or position of DailyO.in or the India Today Group. The writers are solely responsible for any claims arising out of the contents of this article.

The writer is an HR consultant and historian based out of Chennai. He graduated from the London School of Economics and has had more than 20 years of experience in HR and training in Cognizant, Infosys and McKinsey. He has been writing on Tamil Nadu's history and art for more than a decade and has 5 books on this area. You can also visit his website www.mysticalpalmyra.com.