Did 'prostitution nosedive after demonetisation'? Why Ravi Shankar Prasad's claim is problematic

This points to the BJP's penchant for mixing politics with a heavy dose of sanskar.

So, among the many "benefits of demonetisation" that the BJP has managed to spot, the latest happens to be that the move led to a fall in flesh trade and trafficking of women.

Speaking on the eve of the first anniversary of the notes ban exercise, Union law minister Ravi Shankar Prasad on November 7 said that because of the move, "Flesh trade has nosedived in India. Trafficking of women and girls has gone down considerably." He went on to add that the scrapping of the Rs1,000 and the old Rs500 note also brought down incidents of stone-pelting in Kashmir.

In another statement of mind-boggling insensitivity, Prasad also said that "only those who were not skilled enough" lost jobs after demonetisation.

The remark has left people confused, with many wondering what data Prasad used to base his claims on, and if curbing flesh trade had been a planned objective of demonetisation all along, or is now being cited as a corollary benefit only to defend an economically ruinous exercise.

I am just amazed and horrified that @rsprasad 's measure of Demonetisation's success is a decline in prostitution? Do these folks even know what they say and what they tweet? @narendramodi these comments don't serve the Government well. Shocking.

'He has the data'

Recent statistics on flesh trade are not available in the public domain. The National Crime Records Bureau is the government body officially tasked with collating data on crimes in the country. The most recent data the NCRB has released has been for the year 2015.

According to media reports, flesh trade did see a fall in the immediate aftermath of demonetisation, but business had picked up by February.

Ravi Shankar Prasad is the law minister of India, and he may very well have sources of information the aam aadmi is not privy to. Indeed, at the November 7 event, the minister claimed to have statistics to back his claim. However, he didn't elaborate, limiting himself to "I have the data".

Only, this wasn't exactly the moment for restraint on the minister's part, who's answerable to many confused and angry Indians, upset at the demonetisation diktat, having lost out on jobs, wages, businesses, opportunities, and more.

Demonetisation has been constantly attacked by the Opposition and economic experts as a move that dealt a body blow to the Indian economy, with the poor and marginalised as the worst victims. Indeed, the Opposition is marking November 8 as a "black day".

There has been a spate of reports on how the note ban hit rural communities and those working in the unorganised sector the hardest. A lot of trafficked women hail from these communities. If the move has indeed benefitted them in any way, the BJP should have gone public with the data.

The party is trying to defend a move that made the whole country suffer. In such a scenario, sketchy claims are not enough, the BJP needs to provide concrete statistics to prove that demonetisation was not the disaster many felt it to be.

The ruling party does not have a great reputation for telling the truth. Making such unsubstantiated claims only casts a greater shadow on the credibility of the BJP and its ministers.

This is not the first time that the BJP has changed goalposts about what the demonetisation was supposed to achieve. The move, when announced, was touted as a "surgical strike on black money". The ill-gotten gains of the rich and corrupt had been wiped out overnight, their loot was now useless. 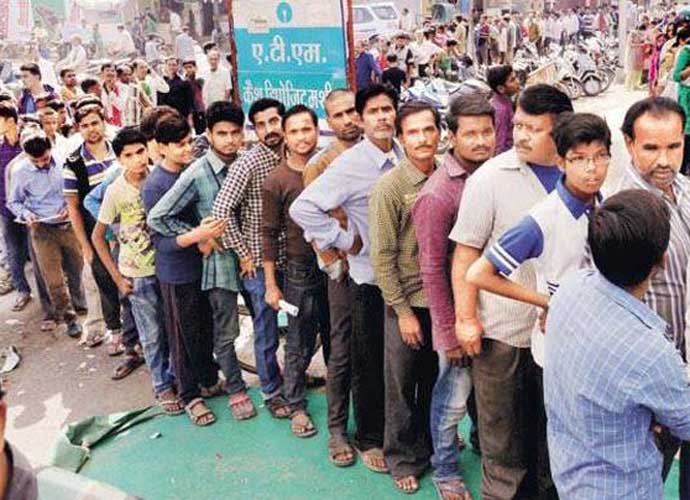 The BJP tried to tell us that people dying in queues was a minor bump in India's grand march to a digital age. Photo: India Today

This was the narrative offered to the middle classes standing in endless queues at ATMs and the poor having to go without wages - that the rich were suffering more, that those who had exploited and "stolen" from them were now staring at wrack and ruin.

However, in the subsequent months, as most of the money returned to the system, demonetisation changed into an exercise that was to usher India into a new age of cashless, digital, and hence scrutinised, transactions.

If you loved your country, you would realise that ephemeral problems - such as people dying in queues - were minor bumps in the grand march towards a new India. After all, soldiers too were dying at the borders. According to the ruling BJP, demonetisation has curbed stone-pelting in Kashmir, cut off Maoists' funding, and hit flesh trade.

Never mind if there has not been much of an effect on black money hoarders and the economy is still limping, trying to nurse itself back to health, with little help from the government.

The BJP's choice of prostitution to be paraded as the "evil" that has been controlled has links to the party's penchant for mixing politics with a heavy dose of "sanskar". According to the BJP, two ills have been controlled by demonetisation – terrorism and prostitution. By what logic can the two be spoken of in the same breath? But in the BJP's universe, the former is an attack on the country's integrity, the other on its morality.

India has a history of trying to crack down on prostitution through legislation – like when dance bars were banned in Maharashtra – with no thought of the rehabilitation of the sex workers themselves, who are not criminals in either case: whether they are engaged in the business voluntarily or by force.

Prasad's statements betray the narrow and prudish mentality that looks at sex work as a problem to be banished, and not as a manifestation of an oppressive and misogynistic system.

These claims are another extension of the BJP using a combination of morality, emotional manipulation and whataboutery to defend an economic blunder. Even on November 7, the finance minister said "demonetisation was an economic exercise based on ethical and moral rationales".

It is not a coincidence that Prasad chose to highlight issues with strong emotional and moral overtones – stone-pelting on our jawans has gone down, daughters and sisters are safer. Feel good and do not question too much.

It is another matter that the Jammu Kashmir government has stated that demonetisation has had no impact on the unrest in the Valley, and stone-throwing had already been on a downward trend because of winter, the exam season, and sheer fatigue.

The BJP seems to depend on a simple formula - when hard data fails, as it often does for the party, appeal to people's moralities and patriotism, and claim that the "Congress was much, much worse".

But the party's election victories show that the formula has worked so far. But unrest against the party is rising, and it would do well to remember that verbal skullduggery will not be enough always.

Post your comment
#Ravi Shankar Prasad, #Demonetisation
The views and opinions expressed in this article are those of the authors and do not necessarily reflect the official policy or position of DailyO.in or the India Today Group. The writers are solely responsible for any claims arising out of the contents of this article.