From Rekha to Deepika: How love, marriage and careers have changed in Bollywood

Thank God for these sorted millennials. Not for them the boring and stuck-up, formatted relationships.

In the mega weddings that took place over the past few weeks, there were many images that stuck out. The rich and the fashionable, the famous and the illustrious… all of them made a beeline for the ultra-luxe parties and gatherings.

But there was a set of images that really made a lasting impression — of top Bollywood stars who came dressed in their own wedding finery to match those of the bride of the day. Their heavy-duty uncut diamond polka sets hung down their collar bones, the long line of brilliant red vermillion etched in their hair parting, the confusion of churas to signify the just-married status. It was all left out to hang, as they say in paparazzi circles. Ms Padukone to Ms Chopra, Bollywood’s leading ladies, revelled and glowed in their just-married status, the love of their lives statuesque by their side, proud as only they can be. It is nice to see a great love story come to fruition. We are all suckers for romance, especially when it comes to these beautiful people whom we have come to adore. Priyanka Chopra, too, had the love of her life statuesque by her side. (Photo: India Today)

There were other leading ladies too. Aishwarya Rai Bachchan, resplendent in a red Banarasi with husband and child, a picture of domestic contentment. Vidya Balan, uncaring of her much-talked about weight, thank you very much! Madhuri Dixit who set the whole thing going — that you can be on the top of your game and get married.

The picture of ‘sexy parenthood and coupledom’ has been virtually patented by the suave Nawab of Pataudi and his ethereal wife, and the ‘you, me and us’ that they portray with the three kids around them. Just the other day, Kajol was yelling at her husband during a popular talk show, explaining as if to a moron, what it takes to make a celebrity marriage work. It is hard work, she said, while the dashing Ajay Devgn said that one has to change and adjust as one grows older and make space for shifting priorities. Ho hum! 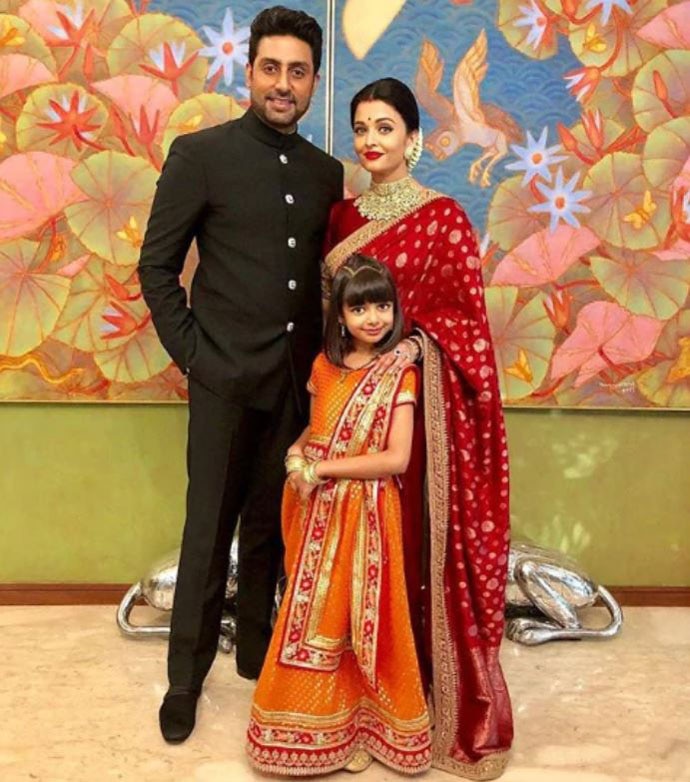 Aishwarya Rai Bachchan, resplendent in a red Banarasi with husband and child, was a picture of domestic contentment. (Photo: India Today)

Listening to all these people, one wonders: When did Bollywood grow up?

It seemed that the middle-class marriage mantras had taken steroids and jumped up in a world where once, only status, stardom and fame mattered. The headline came first, even better if the cover picture was theirs too. This was not so long ago and all you had to see was the resplendent Rekha in her Kanjeevaram sarees to realise how far their world has come. I felt for her. All by herself, graceful as ever and still a style icon. But was it my old fan eyes that saw perhaps a faraway look in hers? The smile that did not crinkle far enough? Then there was Rekha, gorgeous, glamourous — and by herself. Was it my old fan eyes that saw perhaps a faraway look in hers? (Photo: India Today)

There was a time when being married, having a boyfriend, or being seen as ‘sleeping with someone’ was anathema to female star status. There was a whole slew of leading ladies who went on to have relationships or marriages with their leading men, who in many cases were already married. Hema Malini once said in a major TV interview that she never made any demand. That when you are in love, you do not ask such things. But she did make compromises. Urban legend has it that she did all she could to convince Dharmendra’s wife to let him be the legal guardian of her two daughters.When we see an Arjun Kapoor with Sridevi’s Janhvi, we also remember Sunny Deol’s studied indifference to his half-sisters.

Thank God for these sorted millennials. Not for them the boring and stuck-up, formatted relationships. They are a generational change, and a refreshing one at that. Confident too. So confident that they can get into any relationship and shout about it from the top of their worlds. What the rest of us think is of no consequence. Perhaps they can do so because the world itself has changed. When we see an Arjun Kapoor with Sridevi’s Janhvi, we also remember Sunny Deol’s studied indifference to his half-sisters. (Photo: Instagram/ @arjunkapoor)

Married women are no longer put out to pasture in the world of films and entertainment. Except for a few youngsters, they want and have it all — their art, their relationships, fame and front covers, marriage and children. And they continue to do stellar work. They are still sex symbols and will remain to be so. They have just given themselves a longer career run because of their confidence, professionalism and support from writers, directors, film makers — and more importantly, from co-stars, who are no longer chary of a Mrs on the marquee with them.

In India, where we love our cheesy item songs, Kareena Kapoor gave us goosebumps with her sexy ‘Fevikol Se’ in the very year she got married. Madhuri Dixit could show the moves in ‘Ghaghra’ despite two kids. Kareena Kapoor gave us goosebumps with her sexy ‘Fevikol Se’ in the very year she got married. (Photo: YouTube screengrab)

Then there is the Garboesque diva — the Great Rekha. Every time the camera zooms to her face, one wonders if she too would have got the companionship and affection she sought in her own personal life if she was a young female film actor today. Was it the nature of the cinematic world which precluded her from putting herself first?

Fame is hard-won, and even more delicate to keep. It takes a very brave person to give it all up for hearth and offspring, and nary a woman who had reached the level that she did would do so easily. Today, as couples swan around dancing, lost in each other, one still looks at the brightness that is Rekha and not help but feel for her. She deserved it all too. But then as a sensible person once said, being alone is not the same as being lonely!

Also read: Why the perfect wedding gift does not exist