Redefining slap on the wrist.

Reliance Jio and Paytm apologised for using Prime Minister Narendra Modi’s face on advertisements they published in national newspapers. That’s it. Oh, they are liable to pay a fine of Rs 500 for using Modi’s photo in an advertisement without seeking permission.

In February, the Ministry of Consumer Affairs sent notices to both the companies under the Emblems and Names (Prevention of Improper Use) Act of 1950, which bars the use of the prime minister’s name and picture for commercial use.

According to the Act, “Notwithstanding anything contained in any law for the time being in force, no person shall, except in such cases and under such conditions as may be prescribed by the Central Government, use, or continue to use, for the purpose of any trade, business, calling or profession, or in the title of any patent, or in any trade mark or design, any name or emblem specified in the Schedule or any colourable imitation thereof without the previous permission of the Central Government or of such officer of Government as may be authorised in this behalf by the Central Government”. 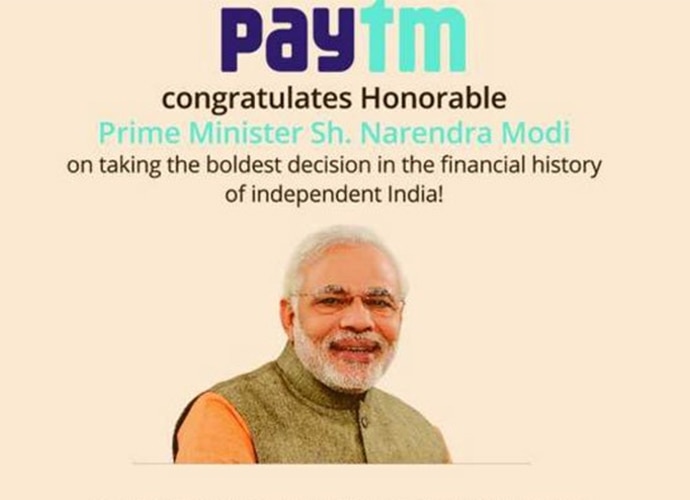 The ads for both the companies need to be viewed a little more seriously (and a little less generously) than slapping a mere Rs 500 fine.

For some context, the Paytm ad was suspiciously quick to praise the prime minister for his demonetisation drive the morning after the announcement was made.

It is all the more suspicious because Paytm was one of the biggest beneficiaries of the demonetisation drive, when struggled to find cash in hand after the government declared 86 per cent of the currency null and void.

The ad managed to raise quite a few eyebrows, especially those of Delhi chief minister Arvind Kejriwal.

The AAP leader attacked the company by saying "Paytm biggest beneficiary of PM's announcement. Next day PM appears in its ads. What’s the deal, Mr PM?"

"Utterly shameful. Do people want their PM to model for private companies? Tomorrow, if these companies do wrongdoings, who will act against them?" Kejriwal asked.

He wasn't the only one:

Was this #PayTM Ad booked last night after Modi dropped the Bomb of #DeMonetisation ? Or Planned well in Advance ? #JustAsking pic.twitter.com/AtQJW3gwHA In the case of Mukesh Ambani-led Reliance Jio Infocomm, the matter is as insidious, though the ramifications are less than apparent.

Reliance Jio, in its ad, tries to portray itself as a flagbearer of Modi's Digital India agenda, which took precedence in the demonetisation drive, after black money managed to yield zilch for the saffron party. Achhe din for Digital Reliance?

The law suggests that written permission is required. According to The Financial Express, officials said while Reliance Jio may have sought verbal approval from the prime minister’s office before using Modi’s picture, there seems to be no written permission.

A report in The Wire claims that multiple political and advertisement industry stakeholders said that it was highly unlikely that this brand campaign would have occurred without an informal agreement between Reliance and the BJP government.

The same is likely to be true for Paytm. After all, the company has benefitted in more ways than one, thanks to the BJP government.

So, thank you for the apologies, Reliance Jio and Paytm. So much for the slap on the wrist.

Also read - Paytm's ads are insensitive and they need to stop