Who introduced Dr Walker to Sushant?

Some were deep in sleep, some battling insomnia and some others waiting for partners to stop snoring so that they too could get some sleep when the hackers struck last night. You can also say the hackers struck early morning because it happened close to Brahmamuhurta, around 3 am. Now, Prime Minister Narendra Modi, whose account was targeted, is known to be an early riser. But this was about an hour or two early by his standards as well. 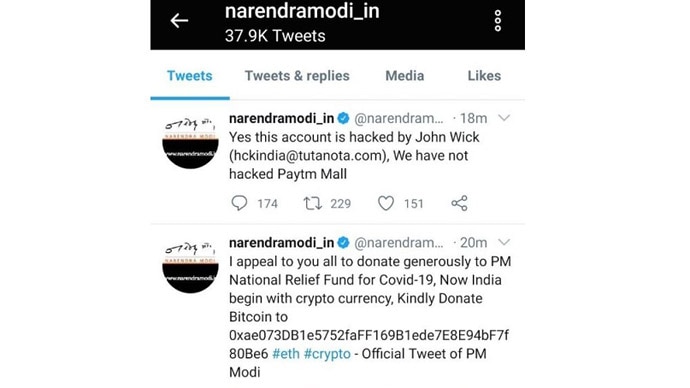 Once hacked, a series of tweets were sent out from the account by an individual or a group identifying themselves as John Wick. The tweets asked people to donate in bitcoins to an account mentioned in the tweet. Desi netizens were appalled with some writing back, “We do not deal in bitcoins.”

Twitter confirmed the hacking with another confirmation: they are ‘actively’ investigating. How do you investigate ‘passively’? Like Mumbai Police investigated Sushant Singh Rajput’s death case. More on that later.

The Twitter hackers have meanwhile reportedly said they committed the crime to clear their name in another crime. All John Wick wanted to prove was that they were not involved in a breach involving PayTM Mall.

John Wick said their name was linked to the PayTM Mall breach. They then wrote to news publishers that it wasn’t them. So, John Wick reached PM’s account to say hello we are here, but we were not there. Where is there? PayTM Mall. Why take credit for what you haven’t done? Hacking too has its ethics. You know there is ethical hacking too which is only done to point out that a system can be hacked.

And exactly what does it mean to hack a system? For that all we need to do is understand what hacking means. Hacking, the Word Of The Day, comes from the German word hacken, meaning to cut into pieces. When you cut someone off from their account, you have hacked theirs.

Oxford dictionary defines hacking as the activity of using computers to get access to data in somebody else's computer or phone system without permission. Consent is key.

People hack trees too and people hack people to death too. Both are criminal acts. The former not completely though. Hacking in terms of hacking computers gained currency around the 1980s. So far hackers have proven to be a step ahead of technology trying to prevent hacking.

PM’s account has been restored. And the PM, it emerged, also put Rs 2.25 lakh into the PM Cares Fund account as the initial corpus, which collected Rs 3,076 crore in the first five days of its setting up. No, this doesn’t mean he put money into his own account because the PM has no ATM card to withdraw money from the account. He can, of course, decide how the money is spent.Talking of money, reports suggest that the kind of money Salman Khan is going to make from Bigg Boss 14 can blow your mind.

Before you get around to counting those zeroes, let's tell you thatSalman will get Rs 450 crore at least. If the show is extended like it was last time, then he will earn more. To watch all that shouting, screaming and hysteria over eggs and aata, you will get nothing. Not even eggs and aata... Pooja, what is this behaviour?

Actor Saif Ali Khan has however got something. The chance to play ‘the world’s most intelligent demon’ Ravan in director Om Raut’s 3D film Adipurush. Raut’s Ram will be Prabhas. 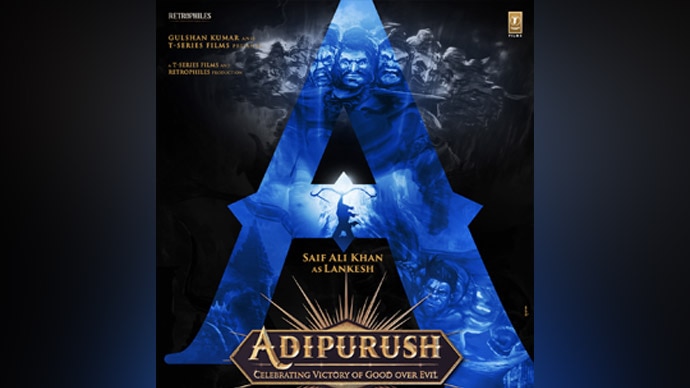 A teaser poster of Adipurush tweeted by Om Raut.

You can see both Ram and Ravan only in 2022, which is when the movie is slated to release.

On days you bend towards philosophy, you can watch them both within.

On days you bend towards religion, you can watch Ramanand Sagar's Ramayan. Did you know how Arvind Trivedi landed the role of Ravan?

So, Trivedi starred in about 250 films, mostly Gujarati, before Ramayan happened to him. He went to audition for the role of kevat, or boatman, for Sagar’s Ramayan. When the makers saw Trivedi, they said, “Here is our Ravan.” Trivedi, however, declined the role saying he had a play to complete. It is said actor Paresh Rawal convinced Trivedi – both Gujaratis - that this is the role you should not say no to. Trivedi agreed.

What saved Trivedi’s career was Rawal. What saved Ravan’s life, till Vibhishan ratted him out, was the amrit in his navel; what was used to poison Vladimir Putin’s opposition leader Alexei Navalny was nerve agent Novichok. Novichok is the same poison that was used to target double agent Sergei Skripal and his daughter Yulia in Britain’s Salisbury. If you want to know just how lethal Novichok is, you got to watch the BBC series The Salisbury Poisonings (streaming on Netflix). A still from BBC series The Salisbury Poisonings.

From Russia and its poison, to China and its treachery, which has come amid talks. To take stock of China’s latest aggression, Army Chief General MM Naravane reached Ladakh today. He will be briefed by top Army commanders on the ground situation.

But it was Sushant Singh Rajput’s psychiatrist Dr Suzanne Walker who briefed the Mumbai Police on the actor’s mental health. According to Walker’s statement to the police, she was briefed by Rhea Chakraborty on the actor’s condition and told that Sushant had suicidal thoughts.

Which doesn’t mean Dr Walker had herself not spoken to Sushant. In her statement, Dr Walker said that Sushant Singh Rajput was suffering from bipolar disorder and that his condition had deteriorated in October and November 2019.

Her statement also reveals what Sushant reportedly revealed to her about his childhood. Sushant was reportedly shy as an adult because he was teased during his childhood. Who introduced Dr Walker to Sushant? Read this to know.

Arrests meanwhile continue to be made in the drug angle. For none of the other angles – murder and attempt to suicide - sufficient grounds for arrests have been found as yet.

What has not been found can still be found. The search is on.

We suggest you don't waste your time searching. Remember you have limited time. Bond, on his part, has none to even die. Good thing. The better thing is that Bond is busy chasing criminals.

How is he doing that? Watch in the trailer of No Time To Die.

#Sushant Singh Rajput, #Twitter, #Narendra Modi, #Rheachakraborty
The views and opinions expressed in this article are those of the authors and do not necessarily reflect the official policy or position of DailyO.in or the India Today Group. The writers are solely responsible for any claims arising out of the contents of this article.