Warning: Sitting is the new smoking, declared a Times of India article way back in 2015. The urgent tone of the headline was trying to draw readers' attention to the health hazards of sitting for long hours, especially at work — the "oh-my-god" so-dangerous effects of the sedentary modern lifestyle that is fast becoming a "ticking health time bomb".

Of course, the West had branded sitting as the new killer long ago. While we may not follow the same work ethic and culture as the West, a fast corporatised India has surely — and furiously, started talking about standing desks — the positives of offices having standing workstations. More and more articles quote experts doling out the pros of "standing and working your way to glory" and the cons of "sitting and walking to hell".

But amid the fuss over the pro-standing and anti-sitting mania, what goes unheard and un-talked about is the plight of workers who have no choice but to stand.

Yes, you may be concerned about what sitting can do to your precious heart or that ever-growing office chair butt, but there is a workforce in India, both in the organised and unorganised sectors, for whom sitting is a luxury and workers who have "standing instructions" to stand and carry out their duty.

Back in 2013, five female salespersons at Kalyan Sarees in Thrissur had gone on strike demanding better working conditions. It took the management three months to accept their demands and revoke their suspension. One of their demands was the right to sit. Standing instructions: For many in both the organised and unorganised sectors, sitting is a luxury. [Representational photo/Reuters]

“We work for 12 hours a day and are allowed to sit only during lunch break, that too, for never more than 15 minutes. Floor managers will keep a tab of how many times we go to the restroom and during rush-hour we are simply not allowed to go to the bathroom. Most of us suffer from knee pain. I can tolerate everything, but please allow us to sit,” a textile shop worker from Kochi was quoted saying by The News Minute. The same report also mentioned that most of the salespersons, who worked for as little as Rs 3,000 to Rs 4,000, suffered from conditions such as aggravated varicose veins at a very young age.

Now, in 2018, the Kerala government has decided to amend the Kerala Shops and Establishments Act, 1960 to stop the harassment of women working in shops, restaurants and other commercial establishments.

The draft Bill, approved by the Cabinet on Wednesday (July 5), among other rights, will have the right to sit. Acknowledging complaints that many shops and establishments have no seating facilities, employers will now be held responsible for arranging proper seating for employees.

Similarly, even sitting at (mind it, not sitting on) work versus standing has two sides to the idea. While lifestyle editors and health freaks were the first ones to raise the alarm with talks about standing desks, every officer-goer at some point in time has been given long lectures on the hazards of sitting for long hours, and perhaps rightly so. Yes, prolonged sitting is a huge problem in our modern-day jobs that require us to function more like robots, less like human beings. In fact, very often, employees look like standing, breathing workstations, meticulously taking down instructions and processing the information unleashed by their "smartphoning bosses". Standing guard: There is enough medical research to prove that sitting down is a basic human right. [Credit: AP photo]

It's also true that many of us need to sit less as it causes health problems. That has been medically proven.

But there is also more than enough medical research to prove that sitting is a basic human right. However, for many of us, standing is not a lifestyle choice. It's a duty. And there have been serious repercussions too.

In 2016, upset over having to stand for long hours at her workplace, a 21-year-old woman from Mumbai's Ghatkopar had committed suicide. A retail store staffer, she used to work from 10am till 9pm — mostly standing. It was reported that she had even confided to her family members that she did not like this work and was looking for a change. But after failing to find another job, she took the extreme step.

Apart from our soldiers who stand for long hours every day to protect our borders, there is an invisible workforce living, breathing and standing among us day in and night out — private security guards, factory workers and numerous others involved in tasks that can be done only while standing, like stocking shelves in shops, housekeeping staff, the young men and women who pester you between the superstore shelves.

How often have you ignored that "annoying" guard stopping you at the entrance of malls and fancy public spaces. While it freaks the hell out of us as those "stupid" guards carry out their manager's instructions, it hardly crosses our mind that he or she has been standing in that position for hours. I know, "that's their job", but it's not meant to be so.

Most retail shops, including fancy restaurants, don't believe in providing seating facilities to their staff. Reason: It's about giving respect to the customers, making them feel good. Customers feel important when a uniformed man or woman is made to stand at the gates and say "Good evening, ma'am-good night, sir" to random people. But this harmless greeting style oftens causes grievous harm to the health of these workers. 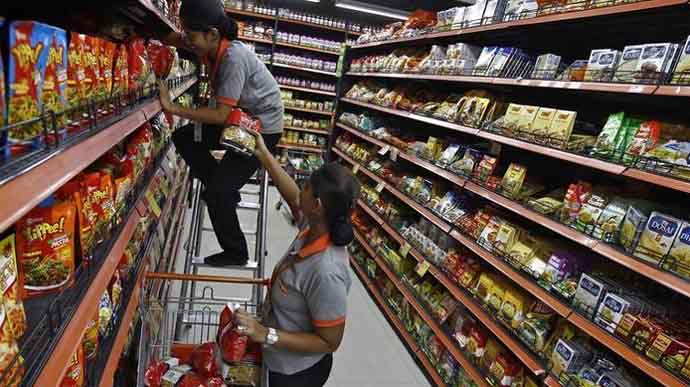 Writing about poor working facilities and shoddy treatment meted out to retail workers, Menaka Rao in this column says: "Stores rarely provide any seating facility for their retail staff. One manager from the retail industry told me that it is considered 'respectful' to stand in front of customers. But this has an impact on employees’ health." “We usually get middle-aged salespeople who complain of chronic pain, feet and leg oedema or swelling, back pain and varicose veins,” Dr AB Goregaonkar, head of Orthopaedics at Lokmanya Tilak Municipal Hospital in Mumbai, was quoted as saying in the same article.

But there are people who feel not standing is not an option, and the demand to sit down is unreasonable.

“If your service requires you to work in a  certain way, you cannot complain,” said SK Rege, secretary, Centre of Indian Trade Unions (CITU). “For instance, factory workers who work in the chain process of manufacturing also have to stand for long hours. The criteria is that the work should be safe, and that the workman gets a break after five hours of work for at least half an hour.”

While lifestyle editors can't think beyond those high heels and ugly cankles — as the only downside of standing — on the other side of the debate is that unbearable foot pain, that insufferable back pain and the intolerable, unfair distinction and dignity accorded to different forms of labour.

It's time we sit down and take a stand.