RSS' vegetarian army, in times of conflict with Pakistan and China

Which army is currently protecting India’s borders — the vegetarian RSS army or the multi-cuisine, multicultural Indian army? And who can do a better job?

India has two armies, as I see it. One, the regular force which protects the country’s borders and pitches in when there is a natural disaster or internal conflict. The other is the army of the Rashtriya Swayamsevak Sangh (RSS) and Bharatiya Janata Party (BJP). 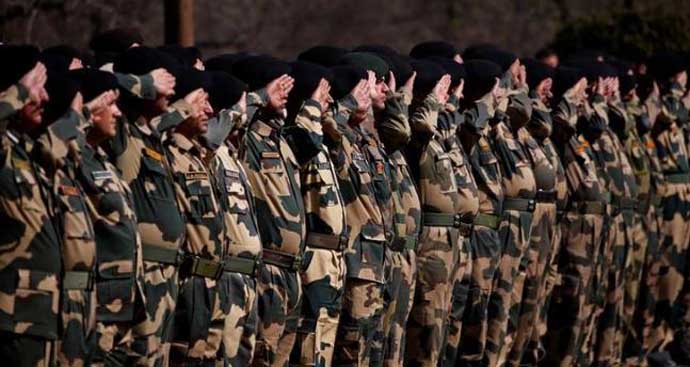 The state-recruited army is trained in a way that it is mindful of multiculturalism. In terms of physical preparedness, it follows global standards. It stands for the whole nation — not one section of the country.

Its diet, as apt for an army anywhere, consists of meat, fish and vegetables, based on the weather conditions in which the battalion is serving.

This army is trained to face the Chinese and the Pakistan military forces in very difficult terrains where chilling cold, high altitude, snowfall, heavy rains and rapid river flows are normal. Hundreds of army men have died on the India-Pakistan border guarding India.

The religion, food habits and cultural practices of the people the army is protecting do not matter because the institution is apolitical.

Who remains in power doesn’t matter to the institution as long as the person or party gets power following the people’s mandate.

The other army operational in the country is recruited by the 'sarsanghchalak' (head of the RSS) and his team. The men trained by the RSS are then deputed to the various wings of the outfit. This army follows the Hindutva ideology and is meant to protect Hindus and the Varna system — Brahmins, Kshatriyas, Vaishyas, Shudras, Chadals and Vanavas.

This army recruits men with a strict condition — that they would follow vegetarianism and worship cows, no matter whether the local culture prescribes it or not. Those who join this army must believe that all beef-eaters should be treated as ‘non-Indian’.

No Muslim, no Christian, unless one gives up that religion, is eligible to join this army. It admits Jains and Buddhists if they adhere to the Hindutva ideology.

Amit Shah is one such representative, now heading the BJP, the political wing of the RSS. He has reportedly at times supported those who have called for beef-eaters to be sent to Pakistan.

This RSS army’s chief, Mohan Bhagwat once said: "Preparing an Army takes six to seven months but we (RSS cadres) will be battle ready in two-three days... this is our capability and discipline that marks us apart." RSS chief Mohan Bhagwat once said the RSS army could train quicker to take on Pakistan than the Indian army. Where are they now? (Source: Reuters)

Now that there is a war-like situation with Pakistan, which army is protecting India’s borders? Is it the vegetarian RSS army — or the multi-cuisine, multicultural Indian army?

The nation knows that the RSS army has not yet reached the India-Pakistan border.

As a south Indian, I agree with this army’s leadership that Pakistan should be taught a stern lesson for letting terrorists use its soil to launch attacks on India. We should also not allow China to occupy an inch of Indian land.

Can the vegetarian army fight the Pakistan and Chinese army?

Is there any other country where a ruling party imposes food restrictions on its own people? Their sole defence is that Muslim countries do not allow pork in their countries, so we will not allow beef. Yes, they do not — but India, from the time of the Harappan civilisation till today, has respected people’s food choices.

By enacting cow protection laws, by attacking meat eaters (with a suspicion that they were eating beef), the RSS army has seriously weakened the nation. Schools, colleges and universities were served with notices that they should serve vegetarian food. Former Madhya Pradesh chief minister Shivraj Singh Chouhan even banned eggs from being served in midday meals.

Air India, which is under the government of India, stopped serving non-vegetarian food on its domestic economy flights. Was this also done to prepare the country for a war with enemies who have a great deal of energy?

Is it the RSS army’s understanding that from the days of Harappan civilisation, India was a vegetarian nation? Was there vegetable production in Vedic times? Yes, milk products have existed ever since the domestication of animals in India began. Our food economy was known as ‘meat and milk economy’. There is no need to change it now.

The RSS also says that its cadre works in the Indian villages and tribal areas for their ‘kalyan’ — do they not know that our tribals cannot survive without eating meat, fish and beef? Food fascism: Those who don't agree with the RSS 'menu' don't have much of a choice. (Source: Reuters)

Did they not see all Shudras, Dalits, Adivasis and others, who built this nation through their labour in all productive fields, could not have worked so hard without eating meat?

What will happen to our hard labour-centered productive activity if pure vegetarianism is imposed on the nation, as they are doing on schools colleges and university campuses?

They put sadhus and sanyasis, who flocked the Kumbh Mela at a time when the Indian was faced with a war-like situation, on top of the nation’s chart of priority and respect. These sadhus and sanayasis not only support the vegetarian nationalism of the RSS but also provide the ‘spiritual justification’ for a beef and meet ban.

The RSS army led cow nationalism in the 1960s. They succeeded in bringing many north Indian states under the ideological influence of cow nationalism even as southern India defied their influence.

They treat meat and beef as 'Muslim food', not human food — they thus do not care for the malnutrition that the children and youth of this country must suffer.

The RSS army’s second agenda is to empower the nation through Yoga — but not running, high jumping, long jumping and so on. If Wing Commander Abhinandan Varthman were to sit in the cockpit in a yogic posture and not eject, would he have survived?

Unfortunately, now the Congress is competing in this cow and-vegetarian politics — which is a real danger.

It is time to rethink this food fascism in theory — so that we stay strong to fight our enemies.

#Indian Army, #Beef Ban, #Rashtriya Swayamsevak Sangh, #RSS
The views and opinions expressed in this article are those of the authors and do not necessarily reflect the official policy or position of DailyO.in or the India Today Group. The writers are solely responsible for any claims arising out of the contents of this article.