The enduring Bond of the Mussoorie hills

Ruskin Bond's writing is why so many of us fell in love with the mountains and have wanted, more than many times, to get ourselves our own Ivy Cottage to move to.

Is a Nobel in literature the biggest achievement in writing? Maybe it is, in the haloed literati quarters. When has Ruskin Bond ever cared for the halo? Years before the world thought of globalisation, Bond retreated to the hills. To his beloved Maplewood, where the songbird treated him to a lullaby every day and the fairies of Pari Tibba came to tease him on full moon nights. It is in the hills that Bond the Lone Fox learned to dance, and once every week, come out of his burrow.

Saturdays in that hill station are special. Saturdays are when Bond makes an ordinary weekday interesting for so many of his readers, cutting across age, class, gender and all our earthly mores. All bound by the same bond: the love for this Bond.

This 86-year-old has not received a Nobel Prize. But the prize he has received is something nobler than the Nobel. He is India's 'most loved author'. Some call him the most loved children's author. Some liken him to William Wordsworth. Some draw parallels between his work and Henry James's. Some also say his love for the otherworldly is reminiscent of Edgar Allan Poe. But Bond is his own person. A person who gave up the world and went inside his cave long before social distancing became the norm. The rest of the world is coming to terms with this 'new normal' today. With his typewriter and Rakesh and Beena, his adopted family, Ruskin Bond has lived a life away from the snares of the world wide web for years.

For many decades now, he has kept his interaction with this fast-paced world limited to a love letter from Ivy Cottage. Every few months, there is a new book, a new short story, a new anthology, new musings that adorn the shelves of Cambridge Book Depot in Mussoorie and we gobble them up with the eagerness of a thirsty traveller in a desert. 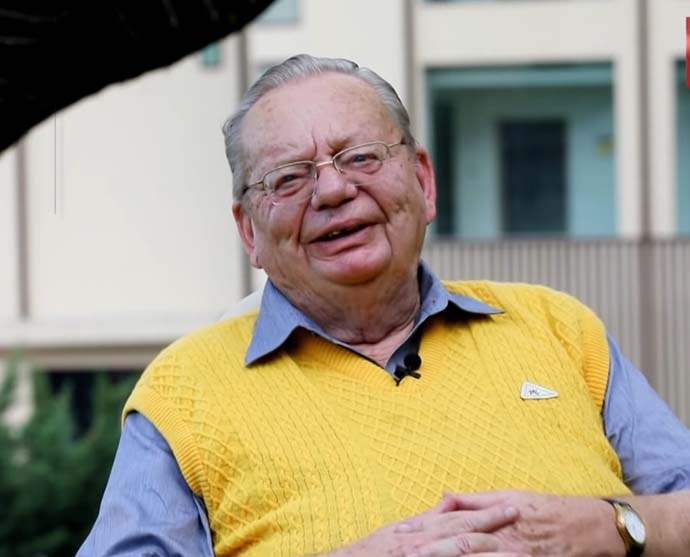 Ruskin Bond is his own person. A person who gave up the world and went inside his cave long before social distancing became the norm. (Photo: Facebook/ @RuskinBondOfficial)

But what is it about Ruskin Bond that we, as a nation, so love?

There were many writers before Bond, and many have come since. It is 2020. We have more writers than readers today. Even as we are inside our homes, with the world having turned its back on us, it is the books that have kept us sane. It is the words, the stories, the art. But why do we keep going back to Ruskin Bond?

The answer lies in that word 'back'. Ruskin Bond's stories are fragrant with the memories of home. His words are understandable. They are as accessible to someone with a PhD in English, as they are to someone who can understand just the basics. But even the most snobbish of our critics have never been able to write Bond off because of his language. Because it is not just Bond's language that makes his writing so relatable; it is also what they speak of. Love, longing, loss, the laidback afternoons on the grass, to the love story without an ending.

Bond's writing is why so many of us fell in love with the mountains and have wanted, more than many times, to get ourselves our own Ivy Cottage to move to. The hillside home where the window opens to millions of stars and the silver Suswa cascades down the valley. Where Bond's birds sing and his faceless ghosts come to say hi. This eternal romance, this longing for something just out of reach, this hope of peace in a land far from our maddening routines is what keeps Bond close to us.

Nearly 70 years since The Room on the Roof, we are still trying to tame the Rustys within us. Some of us are still trying to design our encounters with a Sushila in Shamli. Some of us are wondering why we never got off the Night Train at Deoli. Some of us are looking for our own rainbows, teetering on the brink of insanity, inside the Maharani's Many-Coloured Room. The room on the roof, the room in the hills, the room where Bond taught us not to just dream, but to embrace life as it is. His heroes are never capable of extraordinary feat. Their ordinariness makes them memorable. His heroes are snubbed as 'old'. They are told off by the unlikeliest of people. They are flawed and they are real. Like you and me.

That is the enduring attraction of Ruskin Bond. That is why, when the world shuts us out and the walls close in on us, we can always hop on the Night Train and take off on a journey to the mind of an author. A land where the rules of literature never meant much.