Sabarimala outrage over menstruation is simply contempt for women, an attempt to restrict their prayers, their lives

If periods are unclean, why do we celebrate childbirth? Is it not part of the same biological processes? The temple entry restriction is not based on logic but sheer patriarchy.

The Sabarimala temple has once again been opened to devotees for two — November 5 and 6 — days, weeks after violent protests against the entry of women of menstruating age.

Despite the Supreme Court order that allows women of all ages to enter, the devout are against it.

In order to prevent violence from breaking out as devotees throng the shrine for darshan, 2,300 police personnel, including a 20-member commando team and 100 women, have been deployed. The deployment of such a large team of security personnel is due to the violent protesters who gathered at the temple just weeks ago when women attempted to enter. The Sabarimala shrine has been opened for two days — November 5 and 6. (Source: PTI)

Menstruation in the Indian subcontinent has been a taboo for centuries — and it has also led to many health issues. Periods have been considered ‘dirty’ and women have thus found themselves confined to separate rooms — even sheds — for as long as they menstruated.

It is laughable indeed that we celebrate pregnancy and child birth, while we treat periods with such contempt.

When two women — a 24-year-old named Kavitha Jakkala, who is a Hyderabad-based news anchor and another woman from Ernakulam, identified as Rehana Fathima — dressed in full riot gear and accompanied by 80 police personnel, reached close to the sanctum sanctorum of the Sabarimala temple, the protesters and the chief priest threatened to lock up the shrine and the women had to return. 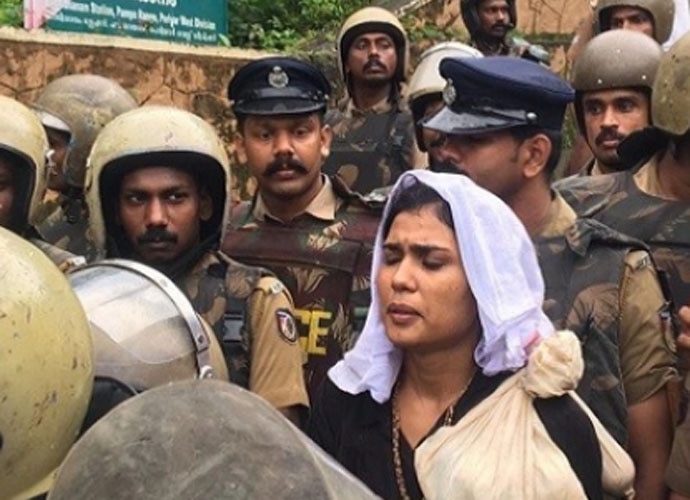 Tourism and Devaswom minister Kadakampally Surendran told the director general of police that the temple is no place for activism.

Shockingly, hundreds of men gathered at the temple were ready to even use violence to stop women from praying. Members of many political organisations requested media houses not to send women journalists to cover the story as they too could have been menstruating.

Union minister Smriti Irani went as far as to say, “I am nobody to speak against the Supreme Court verdict as I am a serving cabinet minister. But just plain common sense is that would you carry a napkin seeped with menstrual blood and walk into a friend's house? You would not. And would you think it is respectful to do the same when you walk into the house of god? That is the difference. I have the right to pray, but no right to desecrate. That is the difference that we need to recognise and respect.”

The image one gets from the statement is that women regularly walk into their friends’ homes with used sanitary napkins in their hands. While I cannot speak for all women, I know none who do that.

What the minister seems to have implied is that she would prefer if women stayed within the confines of their houses while they are menstruating — a problematic thought.

Until a few decades ago, women were often assigned a room where they were to stay for the duration of their period. Perhaps this contempt for menstruating women comes from the belief that a woman has her period when she fails at her womanly duty of being pregnant. It should be pointed out that a side-effect of some forms of female birth control is the elimination of periods.

Clutching at the straws of religion to subjugate women is a well-documented practice used by male priests around the world since the beginning of organised faith. 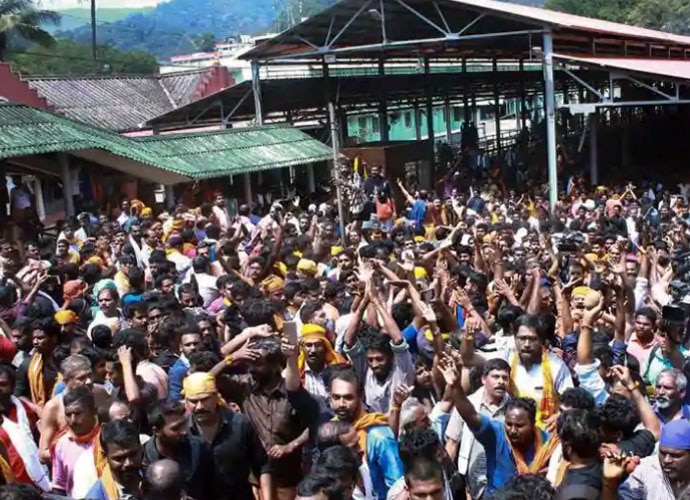 Heavy security has been deployed at the Sabarimala shrine to prevent violence by anti-women activists. (Source: PTI)

Fortunately, better sense prevailed over time and women have since been allowed basic human rights — like being ‘allowed’ to stay alive after their husbands died or getting access into their homes while menstruating. This struggle though, facing such contempt, is the reason that forces us to hide our sanitary napkins and tampons and keep our periods — a routine biological fact — a secret.

These ideas should be obsolete in this day and age — yet, these are the arguments people continue to rage over!

This thought is similar to the one that considers women 'unholy' because their biology is different from men. It is the same thought that would seek to hide a rape, just because the girl and her family might earn a 'bad reputation'.

It is the thought that undermines women and their struggles. It is this thought that puts a man’s humiliation — caused by his own actions — above a woman’s physical and mental anguish over being attacked. This is what patriarchy dictates. Lines have been drawn up, with men on one side, women on the other.

Sadly, there are plenty of women too, who are against women’s right to enter temples — and to live their lives. It appears like a battle of the sexes when it is, in reality, a battle between patriarchy and equality.

It is in essence the right for a woman to live as she would like, while her body goes through something perfectly natural and healthy.

#Patriarchy, #Menstrual Hygiene, #Menstruation, #Sabarimala temple
The views and opinions expressed in this article are those of the authors and do not necessarily reflect the official policy or position of DailyO.in or the India Today Group. The writers are solely responsible for any claims arising out of the contents of this article.