Will there be an end to the deadlock in Sabarimala temple controversy?

The issue of women’s entry to the Sabarimala temple has remained in the headlines for the last several days. People are deeply divided on whether women between the age group of 10 to 50 years should be allowed to enter the temple after the Supreme Court passed an order allowing entry to women of all age groups.

Criticising the women trying to enter the temple, Union minister Pon Radhakrishnan said, “Just to prove a point, disrespecting the age-old chain and acting like an activist is no good.”

Radhakrishnan added, “Lord Ayyappan has never said women from any age group should not come. But then knowing that women in a certain age group cannot do the rituals and penance as per the customs of Sabarimala women weren’t allowed. Also, this is not the case in every Ayappa temple. It is only in Sabarimala.”

According to the religious belief in Kerala, pilgrims visit the holy shrine of Sabarimala in the Malayalam month of Vrischika — the only time of the year when the temple remains open continuously for 61 days because for the rest of the year, the temple opens only for the first few days of every Malayalam month and then remains shut.

The devotees have to practice a vow for a 45-day period before visiting the temple which includes remaining celibate for the stipulated time and adopting the prescribed eating and dressing norms.

It becomes difficult for the women to follow the vow because of the 45-day restriction. Another reason for not allowing women into the temple was the difficult terrain that one has to traverse to reach the spot. 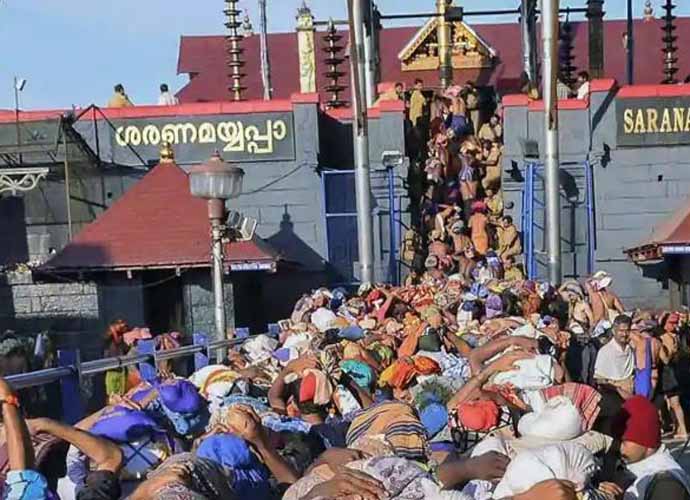 While many women have been fighting for access to the temple just like men, many others say they are ready to wait till the age of 50 or menopause to visit the deity.

The recent Supreme Court verdict has thus opened up a Pandora’s box in the state.

Over the last 2-3 days, what started as peaceful protests has seen the so-called bhakts turn into violent mobs. Women journalists who were in the area to cover the developments have been attacked by mobs.

The state government, has meanwhile, blamed the BJP and RSS for politicising the issue, and giving it a communal angle.

BJP leader and Kerala in-charge H Raja has pointed fingers at journalists for the attacks. “Just because you are a journalist (women), you cannot go inside the temple as if it’s a picnic spot, lodge or restaurant.”

Raja added that the BJP is with the devotees on the Sabarimala issue.

RSS chief Mohan Bhagwat’s during his annual Vijayadashami speech, said that the tradition that has been accepted by society and continuously followed for years together was not taken into consideration and that the faith of crores of devotees was not taken into account.

This tradition had been there for so long & was being followed. Those who filed petitions against it are not the one who will go to temple. A large section of women follow this practice. Their sentiments were not considered: RSS Chief Mohan Bhagwat on #SabarimalaTemple issue pic.twitter.com/lY0ig5yJu4

Meanwhile, the Kerala government has criticised the RSS for taking a U-turn in the Sabarimala case. Kerala finance minister Thomas Isaac claimed that the RSS had earlier been supporting women's entry into the shrine, but now has completely changed its stand after the protests by Ayyappa devotees. They have called it a political strategy being put into place ahead of the upcoming elections.

The big question is with side willing to relent, just what is going to happen next?

Will political parties who had all the power to solve this issue before it the situation turned ugly continue to champion the protest aiming for political mileage or will there be an end?