How to stop the pressure cooker from exploding? Let the steam out

Highly regarded for its superior understanding of the science of cooking, the cooker has a reputation for being unpredictable and throwing fits.

“Dissent is the safety valve of democracy… if it is not allowed, the pressure cooker will burst.”

Much before the sharp hissing sound of the pressure cooker whistle reached the ears of the Supreme Court, Indian kitchens have been a witness to the whims and fancies of the foreign-invented ubiquitous pressure cooker for long. There are perhaps a very few kitchens where the pressure cooker failed to feature (if any, because of the ever-increasing price factor), most often than not raising hell. 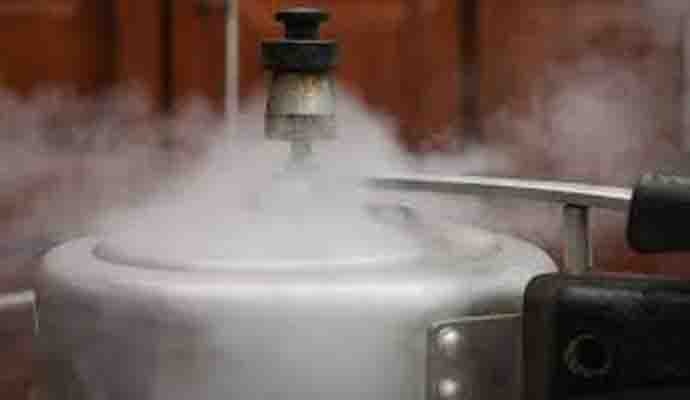 Raising hell: All that it asks for is handle with care. (Credit: YouTube)

If you are of a certain age, gender and background — the mindlessly living middle class Indian — you probably have some daunting memories of the pressure cooker.

Also highly regarded as the leader among all cooking utensils for its superior understanding of the science of cooking, the pressure cooker has a reputation for being unpredictable and throwing fits — ferociously hissing, belching and throwing up violently without warning. If not attended to carefully, or left on the stove unmonitored for too long, it not just threatens to explode, but ends up injuring you with nasty scalds. It's hardly surprising why we ask children to avoid using it, even adults are warned to stay away from the steam and use caution while cooking meals. But almost no one can avoid having it amid them in fear of the impending trouble.

Growing up, like most Indian women of my age, I too saw my mother struggling with the stubborn pressure cooker, yet she never gave up on it. Sometimes she would complain about the weight whistle, yet delicately clean the gasket (the black rubber ring), holding it gently between her un-manicured hands, checking for hurts or injury marks on its delicate lifeless body, as if her life depended upon it. It perhaps did. And the entire family's. The circle of life, as they say.

When I grew up and got into the same routine as my mother's, I almost hated the pressure cooker. On most days, I would ignore it and almost incarcerated it in the bottom cabinet of my kitchen, instead preferring a pot to slow cook my lentils than cleaning up the mess created by the whistling giant. But then I realised, no matter how much I ignore it, it won't stop to exist. Also, the fact that the husband failed to understand my aversion for the cooking appliance. "It's a must in every kitchen, if you don't like this one buy a new one, but you can't make our kitchen pressure cooker-free," he declared one day.

But there was a reason for my dislike for it.

I used to feel that the amount of after-cleaning required was too much a price to pay for the instant cooking it did for me. I was okay waiting for the dal to slow cook and not spend all my energy scrubbing the grease and turmeric stains on the side walls. Also, I found washing the appliance too much of a chore. Many people don't wash the parts (weight whistle and gasket) separately. But for me, it was a ritual I learnt from my mother — to treat all of them equally. They all deserved equal attention from me for the services they provide in their individual capacities.

Each part has its own importance, and the appliance is of no use even if one of the components are missing. Just try and see what happens when you don't scour the dry broth or oil around the edges or food particles stuck in the tiny passage from where all the steam comes out? How violently it starts throwing up, leaving a bubbling starchy pale trail around the cooker, sprayed on the stove and side walls.

The pressure cooker is a serious business player in your kitchen. It doesn't rebel without a cause.

I have discovered that it always manages to put the blame on me for its malfunctioning — either the gasket was not fixed properly, or it was damaged and I didn't notice, or the rim had cracks or food residue along it, or the safety valve needed replacement, there was too much pressure building up for too long.

End of the day, it's all my fault that it's not functioning properly, because I choose to cook in it. But do I have an option? The Presto pressure cooker, unveiled at the 1939 New York World’s Fair, was the first to catch the attention of homemakers. (Credit: frenchgirlinseattle.com)

Over the years, I have learnt to resolve my differences with the pressure cooker.

I know ignoring it, shoving it under the cabinet won't solve my problem, or cure it of its defects. If it's making too much noise for my ears or throwing mess up in the air and in my face, it's not because it is against me, or my way of working in the kitchen, or my preference for some more convenient pots and pans — but because it needs adjustments and care.

Throwing it away or doing away with it won't make my kitchen extra smooth and functional. It will only delay my cooking and instead increase the yelling from the hungry mouths waiting to be fed.

Let me admit, I need the pressure cooker, but for it not to implode, I need to take care of it and not toss it away in some dark, dank corner.

Also read: Lessons on life, cooking and other things from an ingenious mother

Post your comment
#Supreme Court, #Bhima koregaon arrests, #Pressure cooker, #Dissent
The views and opinions expressed in this article are those of the authors and do not necessarily reflect the official policy or position of DailyO.in or the India Today Group. The writers are solely responsible for any claims arising out of the contents of this article.