Salamat Khan, Saif’s forefather arrived in India in 1480 AD. But hold on before you give him any tag.

It’s Monday and we are back!

Hope you had a good weekend. Now, don’t get hassled thinking what you did, but shouldn’t have, and what you could have done, but didn’t.

There is so much pressure to make the most of every moment, that we are missing out on the moments worrying how to make the most of it. So relax! And today we need to relax even more, because today happens to be Blue Monday, believed to be the most depressing day of the year.

Is it unique to 2020? No, the third Monday of January every year is a 'Blue Monday'.

The answer to all your feelings, blues and feeling the blues could lie with Zeus.

The belief is that the gloomiest day of the year would be marked by bad weather, guilt over not being able to keep up with the goals set for the year and money worries. But weather differs based on which part of the world, even country, you are in. Guilt is our constant companion, not a special January guest, and money worries — let’s not even go there today because well, it’s a Blue Monday.

The day finds a basis only in pseudoscience, which, as you know, is no science at all (pseudo: false). The concept was first publicised as part of a 2005 ad campaign from travel agency Sky Travel, which claimed to have calculated the date using an equation. Now, this claim was so absurd that no one ever tried to even prove it wrong.

Sky Travel that opened business in 1994, shut shop on June 24, 2010 — that happened to be a Thursday. But have you ever wondered why despite being such a common colour, blue is associated with all our low feelings — feeling blue, feeling the blues, Monday blues? Now Monday blues, we all get because well, it gets us back to work, but why is feeling down and out described as feeling blue?

Blue, you would have guessed by now, is our Word Of The Day.

Let’s break it down further.

Zeus was the Olympian God of Sky and Thunder, and the sky is blue (nah, not the nonexistent blue in our polluted cities, but the actual blue). When Zeus was sad, he would cry. When he would cry, it would rain. So when we are sad, we feel blue!

Scientifically, it has been proven that rain can make us feel a bit depressed. That, however, doesn’t apply to all of us.

But why would gods need to cry? Aren’t we supposed to go crying to them? Ah! We are talking mythology, not history.

Okay, since we're on history, let's talk some history.

Don’t go the way our ‘history buff’ went. Actually, you may! Who are we to tell you which way to go? But you do get who we are talking about, right?

Now, in a promotional interview for his film Tanhaji: The Unsung Warrior, Saif said a lot of things and we are still trying to make sense of what he meant when he said those things. Help us do it, watch the interview here:

But one thing that he said quite clearly was that he is a history buff. Actually, no he didn’t say it. Film critic Anupama Chopra said, “You [Saif] are a history buff.” Saif just said “ya” to that. He then went on to say that there was no 'concept of India' till the British gave India the concept of India.

Now, we leave that to the historians to decide. But we do know that there was an Afghanistan. Not trying to declare Saif an outsider here. He is constitutionally as much a citizen of India as you and we are. We just did some digging into the history of the “history buff”.

But before we get to that, if you are still wondering whether you should watch Tanhaji: The Unsung Warrior or not, read this.

So, Afghanistan is where Khan’s ancestors came from over 500 years ago, all trained in horsemanship. Salamat Khan, Saif’s forefather arrived in India in 1480 AD.

Cut to 1939; Saif’s grandfather Iftikhar Ali Khan (IAK) Pataudi was married to the daughter of the last Nawab of Bhopal, Sajida Sultan. Nawab Hamiduallah Khan had two daughters. He declared his elder daughter Abida Sultan as his successor but Abida moved to Pakistan at the time of partition.

Saif’s paternal uncle, Mansoor Ali Khan Pataudi's cousin Major General Isfandiyar Ali Khan Pataudi, who moved to Pakistan, was one of the contenders to the post of the ISI chief back in 2012 (a little bit more on that here).

Those of you who follow cricket would also know about Shahryar Khan. Yes, he was the chief of the Pakistan Cricket Board. Shahryar happened to be the uncle of Saif’s father Mansoor Ali Khan Pataudi.

Saif Ali Khan's great grandfather, Hamiduallah Khan, is also believed to have written a letter to Jinnah saying he wanted Bhopal to merge with Pakistan.

That didn’t happen, of course. But none of this should make us turn against Saif. His ancestors did what they did. And if they wanted to settle in Pakistan, it was well within their rights. We don't get to choose our ancestors, do we?

We just found the connections fascinating and so brought it up. Want to read more on this? Click here.

So, whether India existed before the British came in or not, once they got in, they made Calcutta the capital of the country. They however, moved the capital to Delhi in 1911. But why did they shift the capital from Calcutta to Delhi? It wasn’t only because it was easier to govern India from Delhi.

But wait. Why are we suddenly talking about capitals? That’s because India today saw a state declare it will have three capitals. The Andhra Pradesh government just cleared the proposal to have Amaravati, Visakhapatnam and Kurnool as capitals of this 13-district state. Many of these 13 districts were fighting to be made the capital. So, maybe the government thought why leave anyone disappointed? Sabka saath, sabki khushi.

If you want to dig deeper into why Andhra Pradesh did what it did, read this.

Now, let us come back to why the British decided to shift the capital of India from Calcutta to Delhi. We mean why not make both; why choose one?

If only the British had the same intelligence as the Andhra government!

It was Viceroy of India Lord Hardinge who answered the question in a letter on August 25, 1911, to the then-Secretary of State for India, Earl of Crewe.

In 1909, the Morley-Minto reforms had allowed Indians for the first time to stand for legislative council positions. Hardinge said these elected legislative bodies meant that Britain needed to find a more centrally located capital. But that is only half the story.

The other half of the story is that the British administration was finding it difficult to govern from Calcutta because the opposition to the government was rising. This information was part of Hardinge's letter. (Please don't make us go into history-repeating-itself analogies between Delhi and Kolkata today...).

The British had turned Calcutta from a small fishing village to a commercial hub. In 1905, when the British partitioned Bengal, yes it was the first time that the state was divided into two, it had left Bengalis angry. So angry, that Rabindranath Tagore even gave up his Knighthood! The region was reunited in 1911, but by then, it had become difficult for the British to control the whole country from there.

History is interesting, but it is also heavy (some of us are not 'history buffs' either!). So many dates. So many events and so many names.

So, if all of this got too heavy, let us give you some information that would be lighter to take on this already-blue Monday.

You must have heard that over years, the eyes of dogs have evolved in a way that they are more appealing to humans. So, when you look at your dog, you do get to know that it is trying to tell you something or seeking your attention. But have you ever noticed a dog whose eyes have mismatched colours? 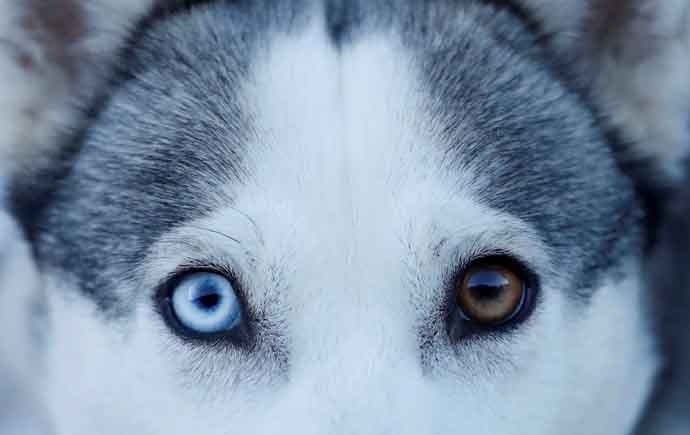 Husky is just one of the several breeds of dogs that have both eyes coloured differently. (Photo: Reuters)

Huskies. Those cuddly doggos you meet in the Arctic. A lot of other breeds also have different-coloured eyes. Why and how?

Blame it on heterochromia. The colour of the iris will depend on the presence of a pigment called melanin (that's the same pigment we desis in the tropics are blessed with in abundance, more than our Western friends, and hence, don't need to sunbathe to get that tan). When the amount of melanin in both eyes differ you — no, dogs — have heterochromia.

If you're still feeling blue, listen to this: