Saina's shaadi to Parupalli Kashyap was everything so many others weren't. Quiet, graceful, dignified, funny, and all about two people in love.

Silence is golden. That gold may not be so valuable in the bullion market, but it is precious to a soul tired of the glitzy, big-budget and wasteful weddings we have recently seen in a seemingly unending blingy baraat.

We are not talking about the Supreme Court, which has also expressed its concern over the wastage of food and water in Delhi at those extravagant weddings, which could even shake GDP numbers.

We are talking about us — fingers hurting and eyes watering — as we scroll down the photos and videos of these celebrity weddings.

And then, we bumped into the photos of the wedding of badminton players Saina Nehwal and Parupalli Kashyap.

Finally, we derived that panacea, the perfect salve, we were looking for to recover from the injuries the weddings of this season have inflicted on us.

Their wedding was a private function, but since some recently held sangeets have redefined what a 'private affair' apparently can be, we couldn't believe our eyes when we saw a simple photo of the duo — nothing but a red garland standing out in the photo.

It was love at very first sight — and at that very sight, we conferred on this 'badminton wedding' the award of the best wedding of the year. That pink tinge: Everything had a pink undertone on the wedding day. (Photo: Twitter)

And here are the five reasons, justifying our choice:

Be it the pink tinge in their wedding attire, or the more prominent shade of blue on the reception day, the couple won us over through their amazing colour co-ordination. Designer Sabyasachi is to be blamed for not offering this idea, so simple, yet so eye-catching, to the other celebrity couples he designed for (which, of course, includes everyone in town). 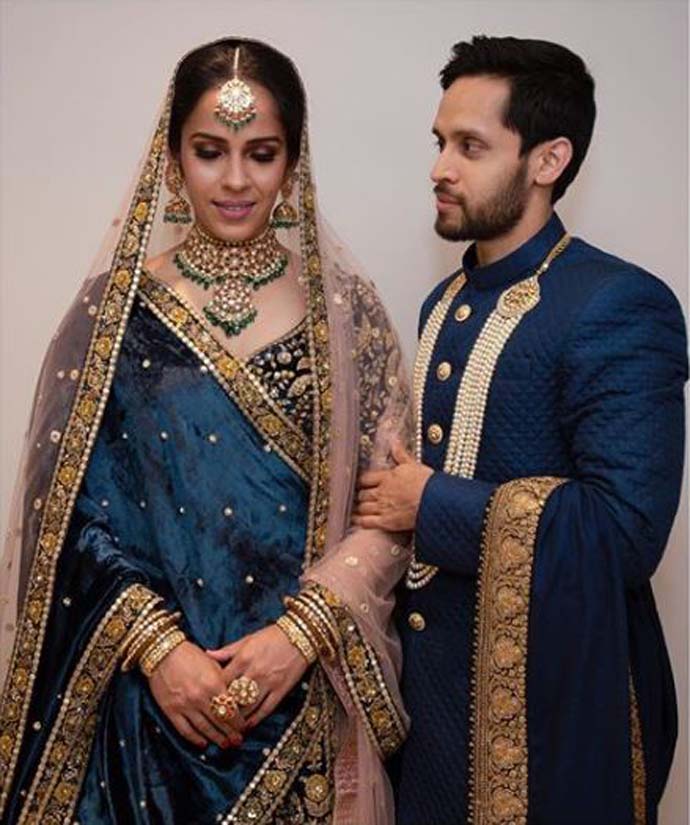 The newest, coolest Sabyasachi couple on the block. (Photo: Instagram)

Saina's reception lehenga was an indigo velvet one and Kashyap was wearing an indigo sherwani made of hand-dyed Murshidabad silk. Their jewellery was also from the Sabyasachi heritage collection.

2. A colour co-ordinated cake as well! Matching-matching: Everything had a shade of blue at their reception. (Photo: Instagram)

We all talked about the wedding cake that Priyanka Chopra and Nick Jonas got.

But here's what our winner duo did — got a blue and white cake as well, matching with their attire.

We don't know whether West Bengal Chief Minister Mamata Banerjee (whose favourite colours are apparently blue and white) was the wedding planner! But colour co-ordination often involves the risk of looking tacky.

But the smashing couple smashed that risk like pros. 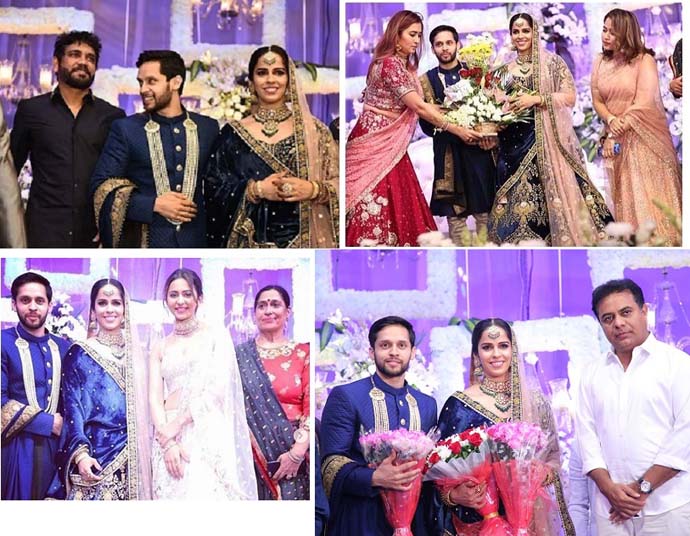 Weren't we tired of seeing the same celebrities everywhere?

If you show us three photos of a Bollywood celebrity, we won't be able to tell you whether this was from Ranveer-Deepika's 23rd reception party or from an Ambani party, which didn't get media coverage at all!

But here, we got to see Nagarjuna, KTR, Rakul Preet, Jwala Gutta, Kidambi Srikanth — and a lease of fresh air.

We really need new celebrities, who do not belong to Bollywood and cricket, in this country.

They are not from north India, but then, Delhi is the seat of power, and every celebrity wants to leave a henna-dyed footprint in Delhi, to be in close proximity of that power.

So, thank you, both Saina and Kashyap, before you change your mind and host a party in Delhi, for giving Telangana and Hyderabad the much-deserved promotion they need.

5. Who else has a childhood photo together?

Saina and Kashyap met each other at the Gopichand Badminton Academy when they were kids and they used to train together. So, this story goes back a long way — and their fans actually found a childhood photo of them.

Meanwhile, there were the usual goof-ups on social media, as many felt the pressure of wishing Saina, but did not know how Kashyap looks. So, they tagged random people, mistook Kidambi Srikanth as Kashyap, and all this happened, silently, graciously, quite sweetly.

So, to sum it up, the wedding was small but it had far-reaching implications.

It taught us all to look beyond the obvious — Delhi, Mumbai, Udaipur, Como, cricket, Bollywood, crackers, vermilion, et al.

Also Read: Because it's fine to splurge! Isha Ambani's wedding releases us from the guilt of riches, and ups India's soft power

#Celebrities, #Wedding, #Badminton, #Saina Nehwal
The views and opinions expressed in this article are those of the authors and do not necessarily reflect the official policy or position of DailyO.in or the India Today Group. The writers are solely responsible for any claims arising out of the contents of this article.