AIADMK objects to ‘Sarkar’: Self goal for the party, free promotion for the movie

The movie is mediocre, a vehicle of propaganda for actor Vijay’s political ambitions.

At the audio launch of Sarkar, actor Vijay took everyone by surprise with his elaborate speech. A man of few words in real life, Vijay was at ease when a fellow actor posed a ‘hypothetical’ question on what he’d do if he were to become a Chief Minister in the future.

Without hesitating for a moment, Vijay spoke passionately about rooting out corruption and how virtuous a leader should be. “I wouldn’t act like a Chief Minister, I would do my job with sincerity,” he said. The crowd went berserk. They followed every word of the actor with rapt attention. 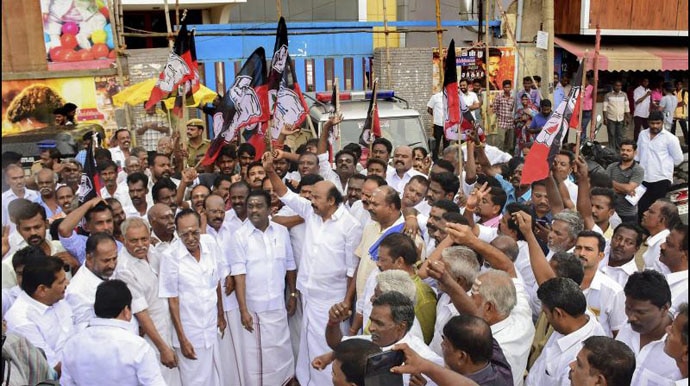 As the movie released a month later, on Diwali, Sarkar  ran into trouble with the AIADMK government, over the depiction of their late leader J Jayalalithaa and her welfare schemes. Ministers in the EPS government were angry and threatened legal action against the producers.

AIADMK cadres went on a rampage across theaters in Chennai, Madurai and Coimbatore, tearing down posters and banners of the movie. Following widespread agitations, night shows of the movie were cancelled in several theatres.

Facing the ire of the ruling government, the makers of Sarkar  were forced to delete the scenes the AIADMK had objected to. Modifications were made in three scenes of the movie.

A political drama, Sarkar is a mediocre attempt at educating citizens on the power of their vote. Every issue dominating the realm of Tamil Nadu is explored in the film, albeit without any constructive solution.  At 160 minutes, Sarkar is a vehicle of propaganda for Vijay, who is nurturing political ambitions. It is a movie where political ambitions of the actor take centre-stage.

The uproar over Sarkar mirrors the political intolerance in Tamil Nadu. A movie certified for release by the Central Board of Film Certification was further re-censored by a party in power, which considers itself beyond criticism. However, by raising a banner of protest against Sarkar, the AIADMK has piqued the interest of moviegoers, and given the movie further muscle at the box office. 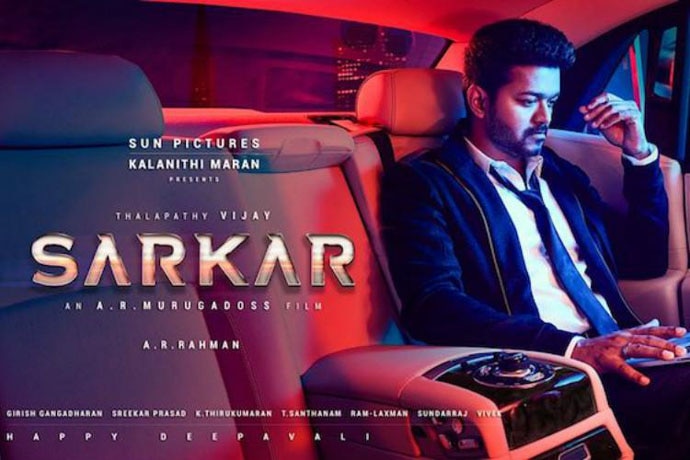 The movie doesn't have much to recommend itself, but has managed to earn over Rs 200 crore. (Photo: YouTube)

The party, thus, has scored a self-goal, providing nationwide publicity to the film, which has by now raked in over Rs 200 crore at the box office. The re-censored version of the movie has one visual deletion, and two references that have been muted.

A scene that depicts a character burning freebies was deleted. The CBFC approved muting of the words ‘Komala’ in ‘Komalavalli’, dialogues which had a reference to ‘Podhupanithurai’ (public works department) and ‘56 varusham’ (56 years). But these very scenes are now being widely watched online. TamilRockers, a platform that hosts pirated version of movies, leaked Sarkar on its first day of release.

The AIADMK, thus, has learnt zero lessons from last year’s fiasco, where the BJP dug its own grave when Vijay’s movie Mersal released in 2017. The Tamil Nadu BJP unit was up in arms against the actor for criticising GST and the Digital India Initiative, pet projects of Prime Minister Narendra Modi. The overdrive of the BJP cost the state unit dearly. It was an unnecessary controversy the party could have avoided.

At the success meet of Sarkar, the makers trolled the ruling government. In pictures that have gone viral on social media, the crew is seen cutting a cake with little fondants of mixie and wetgrinders, the freebies that ruffled the feathers of the AIADMK. 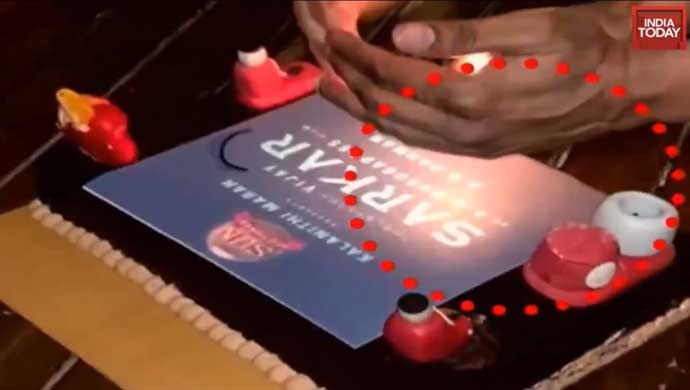 At the success party of the movie, the crew cut a cake with little fondants of mixie and wetgrinders. (Photo: Screengrab)

AIADMK’s criticism of Sarkar has turned the focus on the party, which is being seen as wasting its efforts on a non-issue. That the government has a lot on its plate to tackle — the rising cases of dengue, prepare the state for monsoon and enhance the industrial climate, among others — is not lost on people.

Sarkar is neither the first nor the last movie where political parties will arm twist makers to suit their agenda.  Can our political netas then decide what the public can watch? Artistes from the Kollywood industry lament the state of affairs. Actor Kasthuri said the trend of political parties forcing the makers of a movie into “voluntary censoring” is worrying.

“After the audio launch, it was clear Sarkar is a political drama. Coming from Sun pictures, a DMK stable, the AIADMK should have taken preventive steps if they suspected something wrong. The movie is censored and has released. They cannot counter it by hooliganism or violence. It looks even worse when the ministers bad-mouth the actor and director,” she said.

Condemning the attack on theatres by AIADMK cadre, actor and film historian Mohan Raman said the present leadership lacks the tenacity of erstwhile leaders, who were politically mature in handling crises. When Iruvar, loosely based on the friendship between MGR and Karunanidhi, was released, Karunanidhi had instructed his party cadre to not give the movie free publicity by protesting over it. (Photo: YouTube)

He narrated the story of the time director Maniratnam’s movie Iruvar, loosely based on the friendship between MGR and Karunanidhi, was released in 1997.  “When Irvuvar was released, Karunanidhi told his party cadre not to talk about the movie and give it publicity. Though critically acclaimed, the movie did not do well at the box office. The present leaders should have this kind of maturity and sagacity,” he said.

Post your comment
#Tamil Nadu, #AIADMK, #Vijay, #Sarkar
The views and opinions expressed in this article are those of the authors and do not necessarily reflect the official policy or position of DailyO.in or the India Today Group. The writers are solely responsible for any claims arising out of the contents of this article.