Saudi Barbarian executions: Retribution for terrorism or reaction to dissent?

According to a statement released by the Interior Ministry of Saudi Arabia on Tuesday, 37 citizens have been executed for what the Ministry said were "terrorism-related crimes” — in a gruesome display of the country’s ruthless laws.

The individuals were reportedly found guilty of adopting “the extremist terrorist ideology and formed terrorist cells to spread corruption, insecurity, chaos, sedition and sectarianism and threaten the public peace and social welfare in addition to attacking security headquarters by using explosive bombs, killing of a number of security men and breaching of the trust in cooperation with hostile parties harming the supreme interests of the country,” according to the interior ministry statement.

Their execution was carried out by beheading the individuals with swords and involved publicly pinning two of the executed bodies and severed heads to a pole or crucifying — as a warning to others. 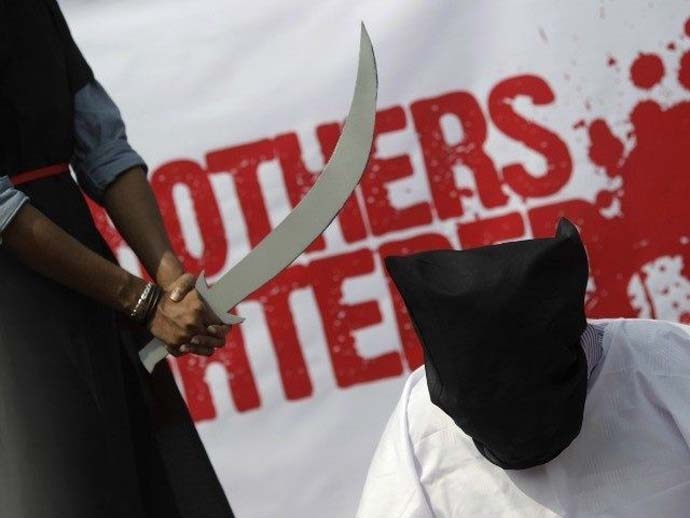 With 37 beheaded on Tuesday, the latest tally brings the number of people executed since the start of 2019 to 96. (Representational image: Reuters)

Among those put to death was a young man convicted of a crime that took place when he was 16 years old, said Amnesty.

“The use of the death penalty is always appalling but it is even more shocking when it is applied after unfair trials or against people who were under 18 at the time of the crime, in flagrant violation of international law,” Lynn Maalouf, Amnesty International’s Middle East Research Director reportedly said.

While the allegation, trials, sentencing and the nature of the execution, all seem nothing short of draconian, the bigger question arises on whether the individuals were indeed executed for terrorism, or was it some other ulterior motive? To even an eye untrained in international affairs, this seems a witch-hunt of the country’s Shia Muslim population — minority Shiias have been the target in the Sunni-majority country and have always been subjected to persecution. The sentences were carried out in Riyadh, the Muslim holy cities of Mecca and Medina, central Qassim province and Eastern Province — home to the country's Shia minority.

According to Ali Al-Ahmed, who runs the Gulf Institute in Washington, 34 of those executed have been identified as Shiites based on the names announced by the Interior Ministry.

"This is the largest mass execution of Shiites in the kingdom's history,'' he told news agency AP.

Human Rights Watch also observed that most of the convicted were members of the country’s persecuted Shia minority. “Today's mass execution of mostly Shia citizens is a day we have feared for several years. The punishments are especially grotesque when they result from a flawed justice system that ignores torture allegations," Adam Coogle, Middle East researcher at HRW reportedly said. "It is also yet another gruesome indication of how the death penalty is being used as a political tool to crush dissent from within the country’s Shia minority," Maalouf reportedly said.

The statement by the Ministry added: “As it announces that, the Ministry of Interior reiterates that this country will not desist of deterring anyone who may think of trying to harm its security or stability as well as the nationals or the residents, either, on its territories, adding that it is resolutely and firmly continuing to seek justice through carrying out the rules of the sacred Sharia, on anyone who may cross the set limits of Allah, it also warns against anyone whose self may rationalize to him committing such terrorist and criminal acts, that the Sharia prescribed punishments shall be imposed upon him/her.”

The latest series of executions brings the number of people executed since the start of the year to 96.

Saudi Arabia is one of the world’s top executioners — it is behind only China and Iran.

While executions have fallen worldwide in recent years, Saudi Arabia has seen an increase — and by the look of it, is set to break records in 2019.

The country carried out 149 executions in 2018. Most were drug smugglers convicted of non-violent crimes, according to Amnesty’s most recent figures.

If such gruesome and violent executions were a deterrent to terrorism, there would have been peace and tranquillity on the planet for many centuries now. However, that is not to be.

Further, any voices of disagreement against the ruler or those in power have never been tolerated in the oil-rich nation. Ranging from the cold-blooded murder of journalist Jamal Khashoggi to the public flogging of blogger Raif bin Muhammad Badawi, the rulers have never appreciated nor tolerated any form of dissent.

Be it retribution for terrorism or raising a voice of dissent, an eye for an eye, they say, makes the whole world blind.

Crown prince Mohammad Bin Salman Al Saud seems to be readying himself to rule over a kingdom of the blind.