Why the 'Stone-Age Sentinelese’ is a figment of racist imagination

The killing of John Allen Chau, an American Christian missionary, by a "tribe" touted to be the direct descendants of the "early men" from Africa, makes for a sensational tabloid story for all the wrong reasons. It has John Allen Chau, a foolish yet well-meaning young American, out to spread the word of Jesus in the Andaman in the 21st century – as if the past 200 years of colonialism and proselytisation were not enough.

Pitted against him are the "fierce" Sentinelese of the Andaman and Nicobar Islands – described often as a "pre-Neolithic" community, who have shunned themselves from outside contact for 60,000 years. With the plots and characters thus posed, the story seems unbelievably 19th century, when racist anthropology and civilizing mission were "progressing" hand in hand. Yet the writers of these stories are not racists. They critique the civilising mission and type their words on the latest technology computers.

I am referring to some journalists and filmmakers from prominent global media houses like the BBC, ABC News and The Telegraph, who started showcasing this story, after John Allen Chau was killed by the Sentinelese sometime between the 15th and the 16th of November.

While their support to the tribe’s right to remain isolated from the outside world and their critique of Christian missionaries still attempting to force their religion on others is appreciable, what remains unsettling, however, is the western media’s obsessive fascination for the Sentinelese as the only living traces of the "pre-historic man" which is passed then as the prime reason for their protection. 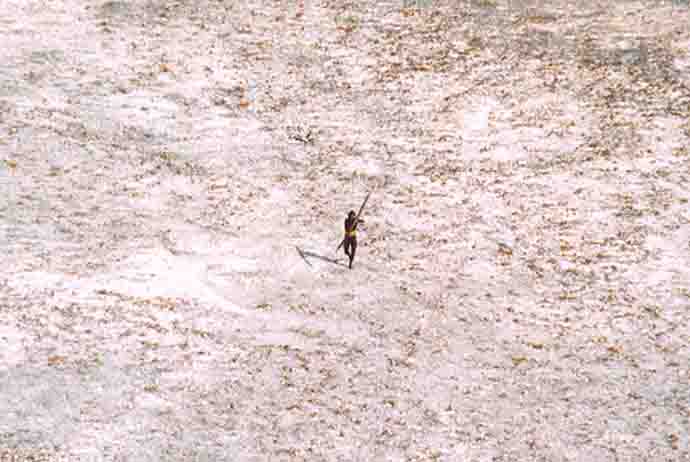 Are the recent stories on the Sentinelese only working to impose a racist discourse? (Photo: Indian Coast Guard/ Reuters)

The tribe’s 60,000-year-old existence in the North Sentinel Island has been repeated countless times in these stories, in a way that the Sentinelese also become 60,000 years behind us in the evolutionary scale. "Paleolithic", "Pre-Neolithic", "Stone-Age", "Uncontacted", "Outside of civilisation", "descendants of the early men from Africa", are some of the popular descriptive terms/phrases used for this tribe, and together they churn the narrative of not merely protecting, but also "preserving" the Sentinelese as living "artefacts" of the human evolutionary scale.

This is a highly offensive way of describing a community of people who have chosen a way of life different from most of the dominant cultures prevailing in human societies today. It enforces once again, all the racial connotations that the term "tribe" evoked in the museums and exhibitions of 19th century British India, where tribal communities became representatives of pre-history – their tools, ornaments, physicality, projected as remnants of a time held frozen for thousands of years.

This is a process that, Johnannes Fabian, calls the denial of "coevalness" or contemporary status to tribal societies, which inevitably portrays them as backward and belonging to another epoch, if not out-rightly sub-human [Fabian 1983].

While in post-colonial India many indigenous communities have themselves chosen to be represented as "tribes" in order to assert their political and territorial rights within the Indian state, it is clear from the recent stories on the Sentinelese, that the term "tribe" can still become the imposing, racist discourse, that it was during the colonial times. Especially, if the communities themselves have no say in these representations.

In fact, the representation of the Sentinelese as a "stone-age" tribe is inherently contradictory, as the term "Sentinelese", itself is a relatively recent import. It is derived from the name of the island that the tribe inhabits called "North Sentinel" – which is itself an English name that began to be used for the island from the 1850s when it came under British colonialism.

Referring to the Sentinelese as "pre-Neolithic" or direct descendants of the "early man" therefore is a blatant give away of the relatively recent fiction that has been constructed around the community. In reality we do not even know what the Sentinelese call themselves, let alone any nuanced knowledge about their cultural genealogies.

The "pre-Neolithic Sentinelese", that we know of today, is a figment of a racially charged imagination that derives legitimacy by propping its views on pseudo-scientific claims. The narratives, for instance, often run as: so and so anthropologist claimed the tribe to be the "last of the Paleolithic" people, facing "extinction" almost as if they were a different species. A rare photo of two members of the Sentinelese tribe, which is protected under Indian law and whose population is estimated to be below 50. (Photo: Indian Coast Guard/ Reuters)

In fact the Indian government is not far behind in its leanings towards categorising the tribes from the Andaman and Nicober Islands as "wild life" fitted for tourism. Earlier this year in August, the Indian government removed the Restricted Area Permit [RAP] from 29 islands in the Andaman and Nicober archipelago, allowing foreign nationals to visit these islands for tourism. Many of these islands are indeed listed as "wildlife sanctuaries", where legal categories like "Particularly Vulnerable Tribes" [PVT] silently give way to theme parks of "tribal tourism". A 2013 case in the Supreme Court of India, details how the Jarawas, a "PVT" community from the Andamans, have been forced by the police to dance for the enjoyment of tourists.

In such a situation to understand the nature of violence inflicted on these communities, perhaps, we don’t even need to analyze the 19th and 20th-century histories of British colonialism and Japanese occupation of the Andaman and Nicober islands. And I say this, despite being a student of History.

Because, the hostilities that the people from North Sentinel island show to the "outside world" today, is not merely a reaction generated from the memories of violence that occurred on the community centuries before.

These communities in fact are responding to, and defending themselves, against a violent mentality prevailing today – that sees every aspect of their non-conforming existences as "pre-historic quality" – a mentality that will happily make them specimens of racist fascinations couched in all the legal and political correctness of the "modern" world.

Also Read: John Chau was not a criminal, he believed in Bible, unlike you half-believers