Actor Siddharth Suryanarayan has landed himself in another controversy over his tweets. This time it involves badminton champion Saina Nehwal.

Actor Siddharth, known for his filmography in Tamil, Telugu, and Hindi, is often in the news not because of his acting career, but for his controversial tweets. He is in a soup once again over a comment he made against badminton champion Saina Nehwal. 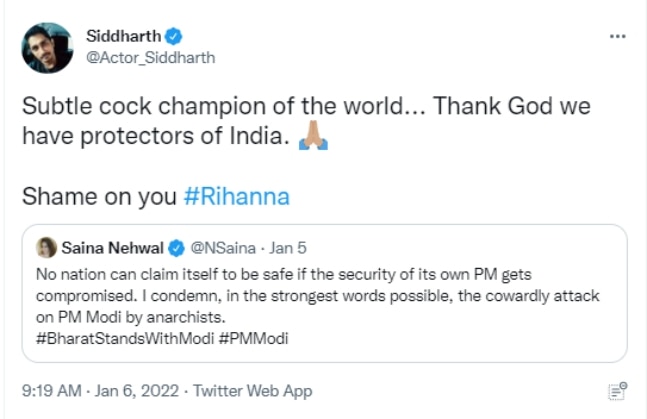 Siddharth, reacting to Nehwal’s tweet on Prime Minister Narendra Modi’s security breach, tweeted, “Subtle cock champion of the world... Thank God we have protectors of India. Shame on you #Rihanna.”

THE OUTRAGE ON SOCIAL MEDIA

His tweet did not go down well with netizens, Nehwal or the National Commission for Women (NCW). Netizens called out Siddharth for his disgusting and ‘sexist’ tweet.

I come from an India where third-grade actors and comedians like Sidharth and Vir Das are called 'real representatives' of India not the Olympic Medalist like Saina Nehwal.

Do not believe in his pampering statements. It clearly sounds insulting on women. let none think they can make statements just like that n get away..

Saina Nehwal speaking to India Today responded to the tweet, “I’m not sure what he meant. I used to like him as an actor, but this was not nice. He can express himself with better words, but I guess it’s Twitter and such comments get you noticed.”

@NCWIndia has taken cognisance. Chairperson @sharmarekha has written to @DGPMaharashtra for investigating & registering FIR in the matter. NCW has also written to @TwitterIndia for blocking the actor’s account & to take appropriate action against him for posting such remarks. https://t.co/pW1hT9zz6W

On the other hand, NCW has issued a notice to the DGP of Maharashtra seeking an FIR against actor Siddharth and urging Twitter to block his account.

In its letter to the Maharashtra police the NCW said, “The commission in its statement said that while the actor used lewd comments on Twitter on the post of sportsperson Saina Nehwal, they were misogynistic and outrageous to the modesty of a woman amounting to disrespect and insult to dignity of women on social media platforms.”

The actor once again took to Twitter to clarify his previous tweet. He claimed that he was referring to the phrase ‘cock and bull’, meaning an implausible explanation to a story or an excuse, rather than what was being construed as a sexual innuendo. Here are 5 other times the actor landed in a twist over his tweets:

It is fairly well known that the actor doesn’t like the present Modi government at the Centre. He has made his disdain for the government clear on every available platform and in his tweets as well. Reacting to the PM's security breach incident and the BJP blaming the Congress-led Channi government in Punjab, the actor tweeted that a channi (strainer) is used to filter tea, but there is nothing to filter the tea-seller (referring to PM Modi). 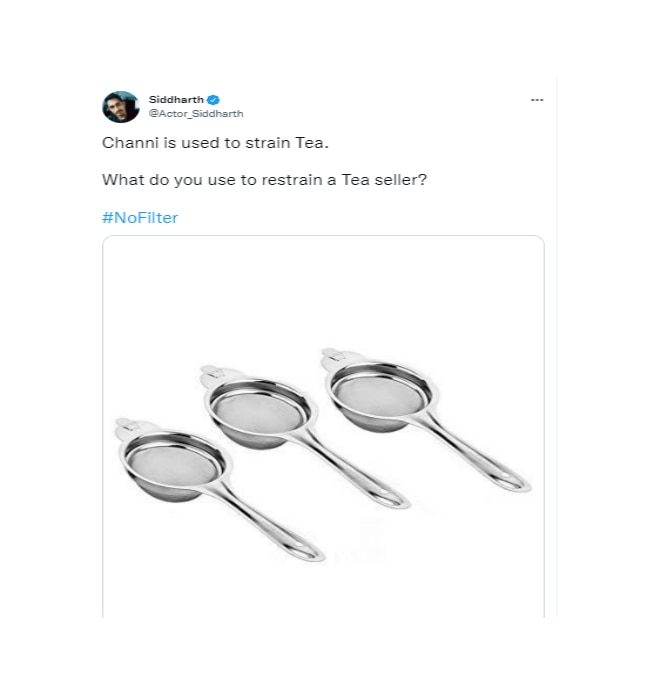 2. ACTORS ON THE FLYOVER

The Channi or the Nehwal tweets are not the only ones, Siddharth has posted about PM Modi’s security breach incident. In a sarcastic remark hitting out at BJP supporters, he said that it could have been actors on the flyover impersonating the PM and his convoy. 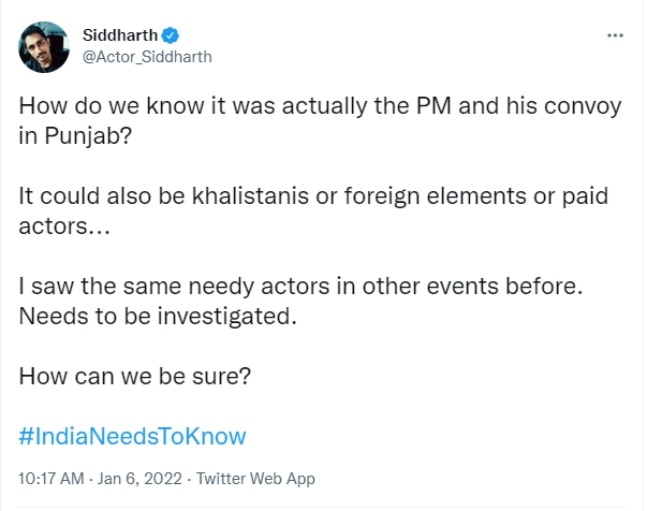 If that was not all, he also took pot shots against actor Kangana Ranaut after the security breach incident by asking why ‘Rangana’ did not come to the rescue of the PM with her ‘Z’ security cover. Of course, the actor doesn’t mention Ranaut by name, but simply refers to her as ‘Rangana’. Now, he can claim he is not referring to a particular ‘Kangana’.

Siddharth used a stinky ‘stoolkit’ remark for Times Now anchor Navika Kumar while responding to her tweet on the Prime Minister’s security breach. The comments under his tweet mirrored his snide remark as well. 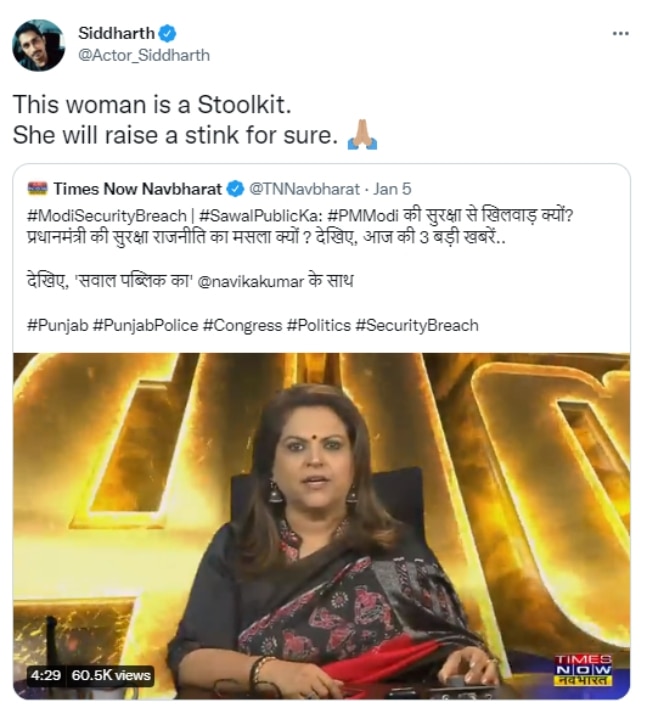 Siddharth’s snide comments are not essentially limited to politics. Soon after The Family Man 2 actor Samantha announced her divorce from actor Naga Chaitanya, Siddharth came out with what was termed a ‘cryptic’ remark on Twitter.

He tweeted, “One of the first lessons I learnt from a teacher in school. ‘Cheaters never prosper.’ What’s yours?” 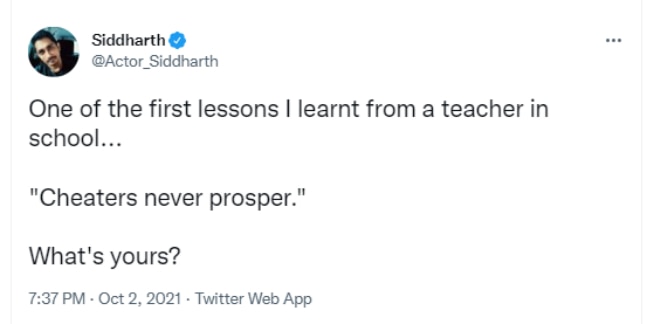 Siddharth refuted claims that his tweet was in reference to actor Samantha. Photo: @Actor_Siddharth/Twitter

Netizens jumped on the tweet and many claimed that he was referring to Samantha in his post. Siddharth and Samantha dated for nearly two years before parting ways for unknown reasons. Samantha then moved on to Naga Chaitanya and married him. Netizens claimed that it was Siddharth's jealousy speaking.

However, in an interview, Siddharth refuted the claims and said that he was never referring to Samantha and his tweet was misconstrued; just like he excused his tweet in Nehwal’s case this time.

TV actor and Bigg Boss winner star Siddharth Shukla’s death came as a tragic development in September 2021. However, some netizens seemed to confuse the TV actor with film actor Siddharth, and he did not take it lightly. After commenting that he was left speechless, he also claimed that it was ‘targetted hate and harassment’ against him. It could have just been a case of mistaken identity, for all you know; and after Twitter pointing it out to him, the actor deleted the tweet. The tweet, given that it came right after the death of a fellow actor and without any words for him, didn't go down well with many. 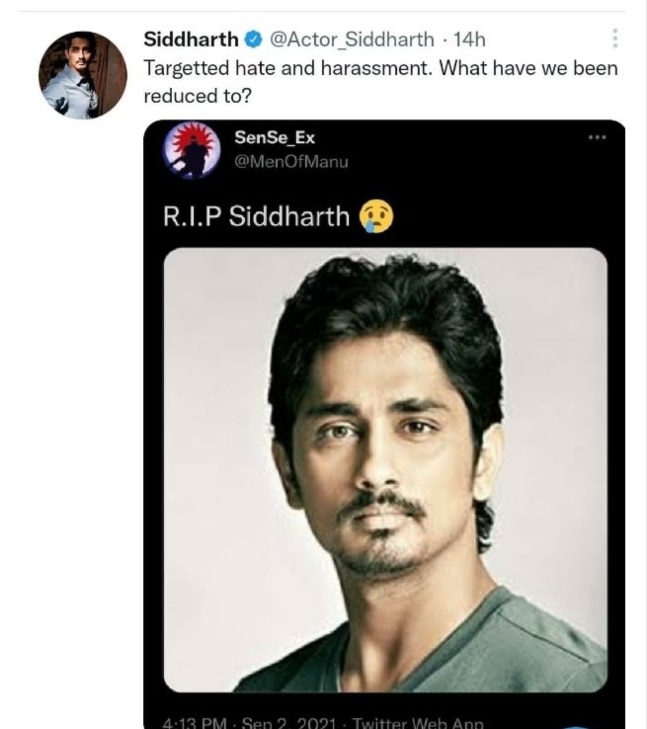 Siddharth was recently seen in the Telugu film Maha Samudram. He is also known for his role as a rebellious youngster in the 2006 Bollywood film Rang De Basanti.