Some of the statements by information and broadcasting minister are ominous.

The central government is mulling a regulatory mechanism for online news, information and broadcasting minister Smriti Irani has said. Speaking at the News18 Rising India Summit, Irani said, “Online is an ecosystem where legislation in terms of news, legislation in terms of broadcast content material, is not very clear. That is something that the ministry is currently undertaking, and in conversations with stakeholders.”

The government aims to come up with a “code of conduct”, or even a legislation, which will be “incumbent upon [media] agencies” to follow. While it is not clear what this legislation might be like, some of Irani’s statements are rather ominous. 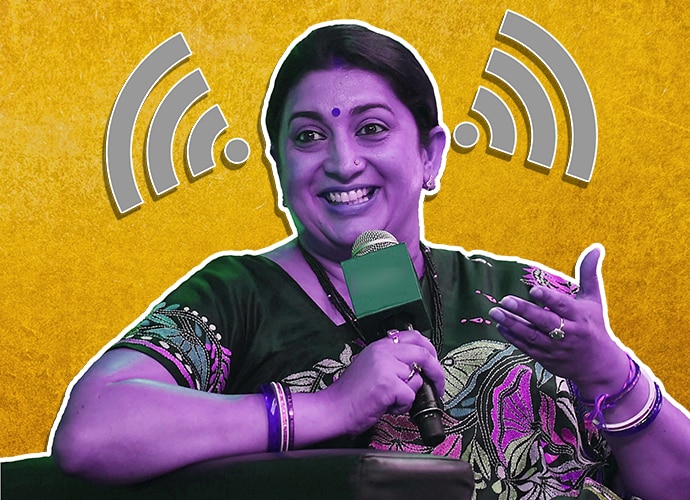 In the almost four years that it has been in power, the BJP government has faced charges of trying to curb freedom of the press. The period has also seen the rampant spread of fake news and videos, often divisive and inflammatory in nature, and the use of social media as a tool for agenda setting.

Irani was asked a question about the latter. She chose to talk about the former.

TV18 political editor Marya Shakil was talking of “new India finding its voice on social media”, and mentioned the prevalent “hate, abuse”, asking if the “government can in any way intervene without really crossing its brief”.

Irani responded with: “I think it’s a balance and a very delicate one.” However, she went on to add that “when it comes to content”, radio, newspapers and television have to adhere to “a code of conduct, a code of broadcast”, but the online space is not similarly regulated, and the government was working to fix that.

Shakil’s question was about social media in general. Why does the I&B minister think that the only way to tackle hate and abuse online is to police the news media?

Social media platforms are by no means the domain of news outlets. They are used by all kinds of individuals and organisations – political parties are increasingly taking the digital route to connect with voters and spread their ideology, and, in the absence of editorial controls that news organisations have, sharing irresponsible, unverified content.

Regulating news websites alone, thus, can hardly be effective in checking the spread of hatred and abuse. In fact, a good place to start would be the BJP’s IT cell, and some individual leaders, who have time and again been found to resort to fake videos to build and fan narratives.

Another factor contributing to the spread of hatred on social media has been the energy and persistence of “trolls”, a “very small and specific subset of online communities who write provocative and offensive posts specifically to elicit reaction”, and go after people with different opinions with vitriol and vigour.

It will be very difficult for the government to police what people write on social media in their individual capacity without stepping on their right to freedom of speech. However, it can always desist from encouraging them. Yet, many BJP leaders, starting from Prime Minister Narendra Modi himself, continue to “follow” divisive and vituperative hate-peddlers, lending them immense clout and credibility.

A journalist’s analysis is not necessarily a bad thing

Asked again if the government could “act as a troll monitor”, Irani said: “Instead of saying that you are a troll monitor, one can say that agencies that want to be a part of news, and factually want to give, let’s say, not only – because news today is also very invested with views, it is not devoid of views – and that is a very fine line that certain journalists or mediapersons tend to cross – so it is now incumbent upon the consumer to have knowledge of what is pure information or what comes over as opinion, and that is, like I said, something that the ministry is considering in terms of putting it in those words which now reflect on broadcasting and advertorials – having a similar line  of ethics and a code of conduct in a free society that is incumbent upon the agencies to abide to.”

The connection from trolling to “news with views” is not easy to make. Also, while media houses are definitely supposed to be objective, opinionated news is not the same as fake news. What the minister seems to call for is a clearer, stated demarcation between “news” and “opinion”.

However, “pure information” and “news invested with views” are terms difficult to have a standard definition for, and concepts difficult to practically separate. Many news stories need context and background, no longer remaining “pure information”. A legislation seeking to establish such binaries will likely be prone to misuse from subjective interpretations.

Print media in the country is regulated by the Press Council of India, and television through the News Broadcasters Standards Authority. So far, there is no body in place to oversee the digital media space. Also, unlike print and TV, news websites do not require a licence or a registration to start operations. However, they are subject to the laws of the land, and safeguards to prevent defamation, or inciting of hatred between communities, are already present in the Constitution.

Last year, hearing a petition demanding a regulatory body for the media, the Supreme Court had said: “We cannot ask them (Centre) to monitor the content of channels. How can we do that? You can approach us or the authority concerned after telecast or airing of objectionable contents only... If something happens and you find them obnoxious, then we will certainly deal with them. Generally speaking, we cannot interfere with it and do content regulation.”

The social media regulator Irani talked about still seems to be in a nascent stage. One can but hope that in seeking to curb “hate and abuse”, it won’t curb freedom of speech.