Muhammad Ali Jinnah is the apology for importing turmoil into Aligarh Muslim University. The Jinnah counterpart in St Stephen’s College, it seems, is the chapel. I wrote “it seems”. And I do so, advisedly, for these are days when over-reaction is a fashion. It has to be so when trivial issues are brought to centre-stage, and serious issues consigned to the backburner. No trivial issue will get anyone excited, unless spiced with over-reaction. The Jinnah portrait is a case in point. What a cosmic issue it is sought to be made into. In olden days, this would have been taken for a case of paranoia. Today, it is an authentic and crowning issue in patriotism; even if it has been a non-issue for over 70 years.

I am firmly against fetishising places of worship. The familiar hyper-sensitivity about them is derived from the stupid and superstitious belief that such places are the exclusive haunts of gods. To me, places of worship are mere facilities.

A church or chapel is only as important as your legs are that take you there. What is important is how your soul — “the totality of your being”” — is disposed. God dwells only in the sanctuary of our inner life. Places of worship are symbols and facilities of convenience. Their significance as identity markers has been over-emphasised, which is unspiritual and unhelpful. This betokens politics, not godliness.

I believe that god is woefully homeless.

The import of the graffiti — the generous promise to convert, for free, the chapel into a temple, like a local variation of the Ayodhya agenda — is that there is an ongoing war between the chapel and temple and, in the given national scenario, the temple has the right to prevail. I don’t think that a war between the respective gods is envisaged.

I am pretty sure that the gods under reference will refuse to fight. (I strongly suspect that gods are like me; they faint at the sight of blood.) They would, assuredly, shake hands, smile at each other, and whisper into each other’s ears: “These stupid idiots!”

As regards the written confession — never mind where it has been written — “I am going to hell,” no one should have any objection. Every individual has the right to choose his destination. Also, the right to be clear about it. Why should it upset anyone, if some people are custom-made to be happier in the warmer hospitality of hell?

I wish the desperate soul the peace that passeth all understanding.

That said, I don’t think, even for a moment that the chapel of St Stephen’s has any scope of being elevated to the level of Babri Masjid. For one, it is a tiny thing, constructed at a cost of Rs 50,000 in 1952 by architect Walter George. The campus of St Stephen’s was too insignificant for any god to think of preferring it as the site for taking birth.

Whether or not gods can be persuaded to make false claims, I really am not so certain. My limited knowledge in such matters makes me believe that they are unlikely to oblige, even if the political climate is propitious. We may tell lies in the name of gods. But gods, themselves, are unlikely to learn this art from us. 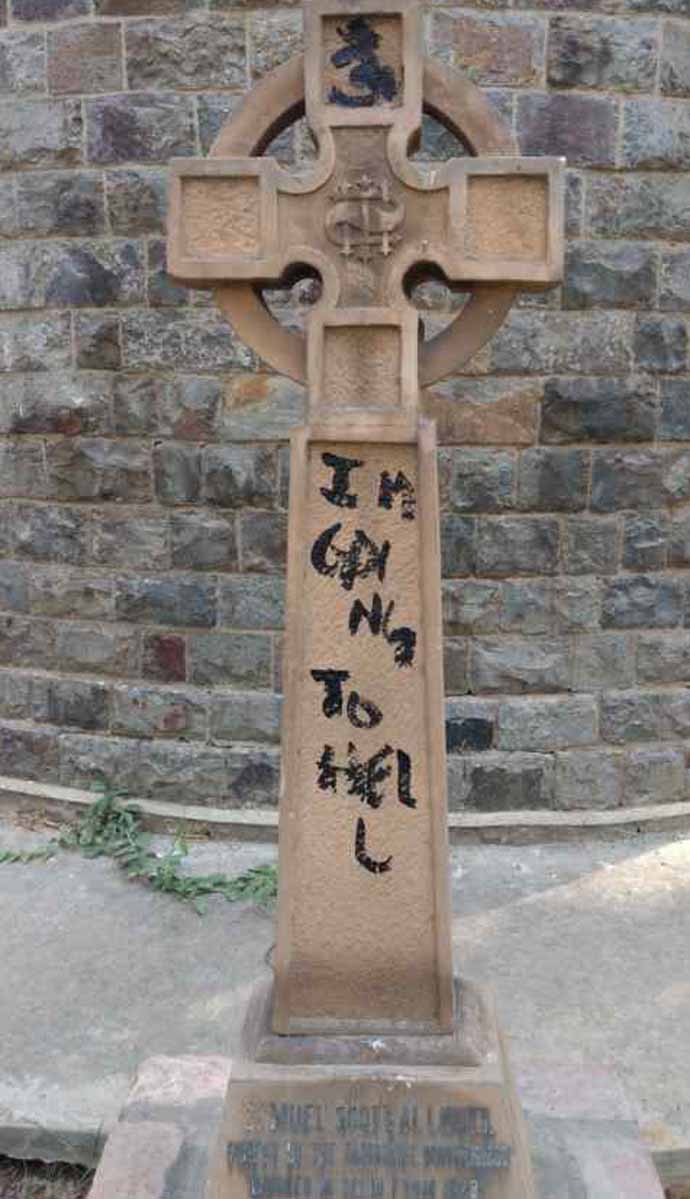 The cross on which the person concerned wrote “I am going to hell” is about 50m from the chapel door. Source: Twitter

I remember receiving Zia ul-Haq, the then president of Pakistan into the very same chapel in 1983 (I know it is suicidal to state this today; for it could provide an alibi for nationalistic fire to rage over the chapel. Zia read history in St Stephen’s from 1940-42.) He spent a few minutes in silent prayer in the chapel. As he was leaving, I presented a copy of the Bible to him, which he received with utmost respect. He said, “I used to read the Gospel regularly at the worship services in the chapel”. The chapel in his days was the senior common room. He added, “But even in those days I was an ardent Muslim.”

I am pretty sure that for the alumni of the college, no matter what their religious affiliation, the present turn of events would be nothing short of a sacrilege. As an alumnus, and the twelfth principal of the college, I see this only as a minor aberration on the part of an unbalanced soul, who deserves our sympathy. As Jesus said from the cross, “Father, forgive; they know not what they do.”

Just in case anyone attaches excessive and unwarranted significance to this event, let me say what’s what. The chapel does not matter much to the Christians either in the college or outside. I tried hard to motivate Christian students and faculty members to attend the short morning prayers held in the chapel, or to spend a little quiet time there, whenever free. Not many of them cared to. A majority of Christian students think it is unfashionable and a waste of time to visit the chapel. This is the truth. And I must state this, even if this could break the heart of the graffiti-monger.

By the way, why can’t we see an event as it really is? Should we really describe this as “vandalism”? It really isn’t. The cross on which the person concerned wrote “I am going to hell” is about 50m from the chapel door. Now conflate the graffiti on the door of the chapel and the inscription on the cross. The demented soul, who prophesises the conversion of the chapel into a temple, is on his right royal way to hell, within the next 50m. Come on, have a heart for this guy!

In most cases, if truth be told, the sensitivities attached to places of worship are mostly spurious, pretentious and exaggerated. Most people don’t care for them. I won’t be surprised if the chapel means more — albeit negatively — to the person who favoured the west door with his graffiti, than to a majority of the Christians in the college or elsewhere. This is the truth. Whether the truth should be told or not is a different issue, though.

Pranks are pranks, after all. Only mad people will see communal terrorists in pranksters.